The 10 largest medical device companies in the world

The 10 largest medtech employers – and what their workers really think

These 10 medtech companies care a lot about research

It’s a question worth asking: What is the value of listing the largest 100 medical device companies in the world – and doing so every year?
Don’t most industry insiders know what the largest companies are? Do they really change each year?
In fact, they do. In the process, the list can reveal trends in the medical device industry. Call it an annual checkup on the state of medtech.
Here are some observations from this year’s Big 100:

1. The merger frenzy continues
Mergers & acquisitions continue to change the medical device landscape, as reflected in our rankings. For example, Medtronic kept its hold on the top spot largely thanks to its $50 billion acquisition of Covidien in 2015, holding Johnson & Johnson’s medical device business to second place on our list. Zimmer Biomet – created through the 2015 merger of the two Warsaw, Ind.–based orthopedics giants – is now 15th on the list, up from 19th last year. Danaher, which retooled to focus on the life science industry, jumped from 13th to eighth on the Big 100 this year, largely thanks to its purchase of a clinical microbiology business from Siemens Healthcare Diagnostics.
Integer – the medical device contract manufacturing giant created through the 2015 merger of Greatbatch and Lake Region Medical – jumped to 50th, up from 74th a year before.
Expect to see M&A drive more changes in next year’s Big 100. For example, just days after the end of its 2016 fiscal year, Abbott closed on its $25 billion acquisition of St. Jude Medical. Ditto for BD, which at the time of this writing was in the process of merging with C.R. Bard for $24 billion. Meanwhile, Cardinal Health in July 2017 closed on the $6.1 billion purchase of Medtronic’s patient care, deep vein thrombosis and nutritional insufficiency businesses.

2. M&A isn’t just the acquisitions
Spinouts and divestitures are also part of the M&A churn. For example, take the split at Integra LifeSciences, which spun its spinal business out in 2015. That business, rebranded as Seaspine, makes its debut at 99th this year.

3. The rising tide that lifts all boats
Consolidation has another effect when it comes to our list: It allows companies that were on the cusp in recent years to make their first appearances in the Big 100, as players are taken off the board higher in the rankings.
In addition to Seaspine, Syneron Candela, Spectranetics, Barco’s healthcare division, Exactech, K2M Group, MiMedx, CryoLife, AtriCure and Alphatec made the list after just missing the cut in 2016.

4. Innovation can fuel growth, too
Medical device companies don’t necessarily need to acquire to rise through the ranks. Take NxStage Medical and the home hemodialysis system it developed. NxStage jumped from No. 97th last year to 88th this year, likely its last appearance on our list given its pending acquisition by Fresenius (5th this year). 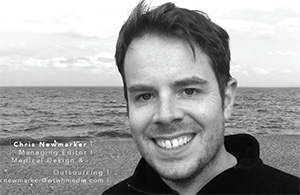 Another example is Abiomed, a proven disruptor in the cardiovascular space. As detailed in this issue’s Big 100 feature story, revenues climbed to nearly $330 million last year, allowing it to rise to 88th from its previous 98th finish.
Abiomed’s rise was propelled by its tiny Impella device, billed as the world’s smallest heart pump. Designed to be delivered to the heart via catheter, Impella’s 50,000 rpm pump helps ailing hearts send blood to the rest of the body, giving it a chance to rest and recover from heart failure – and hopefully avoid the need for a heart transplant.

March 2021 Issue: Are smart knee implants the next big thing in ortho?