A new device developed by researchers at MIT and a physician at Connecticut Children’s Medical Center could greatly improve doctors’ ability to accurately diagnose ear infections. That could drastically reduce the estimated 2 million cases per year in the United States where such infections are incorrectly diagnosed and unnecessary antibiotics are prescribed. Such overprescriptions are considered a major cause of antibiotic resistance.

The new device, whose design is still being refined by the team, is expected ultimately to look and function very much like existing otoscopes, the devices most doctors currently use to peer inside the ear to look for signs of infection. But unlike these conventional devices, which use visible light and can only see a few millimeters into the tissues of the ear, the new device instead uses shortwave infrared light, which can penetrate much deeper.

The findings are being reported this week in the journal PNAS, in a paper by Moungi Bawendi, the Lester Wolfe Professor of Chemistry at MIT; Jessica Carr, an MIT doctoral student; Oliver Bruns, an MIT research scientist; and Tulio Valdez, a pediatric otolaryngologist at Connecticut Children’s Medical Center and associate professor of otolaryngology at the University of Connecticut.

The one clear diagnostic sign of an infection in the ear is a buildup of fluid behind the eardrum, Carr explained. But the view through a conventional otoscope can’t penetrate deeply enough into the tissues to reveal such buildups. More expensive specialized equipment can offer more information needed for a firm diagnosis, but these tools are usually only available in the offices of specialists, who are not consulted in the vast majority of cases.

“A lot of times, it’s a fifty-fifty guess as to whether there is fluid there,” Carr said. “If there’s no fluid, there’s no chance of an infection. One of the limitations of the existing technology is that you can’t see through the eardrum, so you can’t easily see the fluid. But the eardrum basically becomes transparent to our device.” Fluid within the ear, by contrast, “becomes very dark and very apparent.”

While there are more advanced systems under development that do provide data on these deeper parts of the ear, Carr said, those “haven’t been widely adopted. They’re not familiar to the physicians, who have to use a whole range of technologies in their work. These are something new and unfamiliar, and some of these devices require a trained audiologist to run them.” So the MIT team worked to make the new device as familiar as possible, closely resembling the otoscopes that doctors already use. 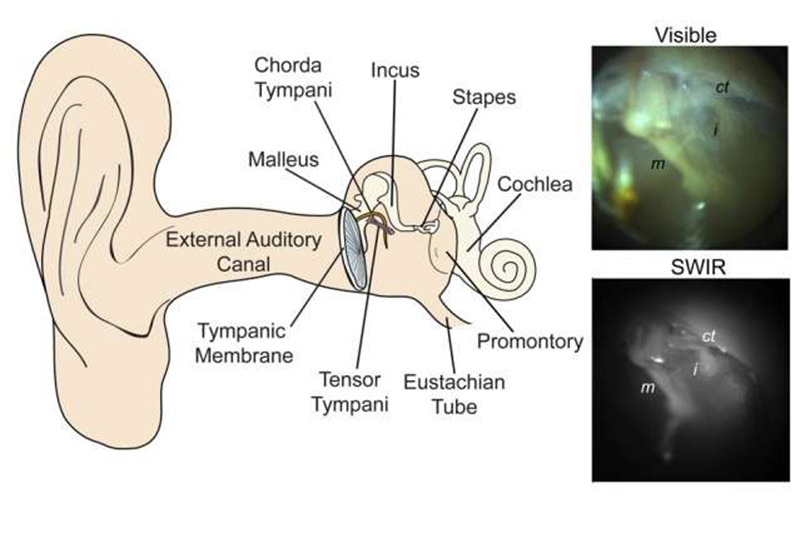 This diagram shows the structures of the middle ear, along with examples of the kinds of images provided by today’s conventional visible-light otoscopes (top) and by the newly developed short-wave infrared (SWIR) otoscope. The new otoscope can probe deeper to provide clearer indications of the presence of fluid which can indicate an infection. (Credit: Courtesy of the authors and PNAS.)

“We developed something easy to use, and that wouldn’t require much training,” she said.

Studies have shown that about 8 million children each year in the U.S. are diagnosed with otitis media, the medical term for middle-ear infections, Carr said. These are especially prevalent among young children: About 80 percent of them will have at least one such diagnosis by the age of 3. But the studies show that such diagnoses are correct only 51 percent of the time—”essentially a coin toss,” Carr said.

The roughly 4 million incorrect diagnoses are about evenly split between false positives and false negatives, indicating that about 2 million children every year are incorrectly thought to have such infections, and are prescribed unnecessary antibiotics. Once the presence of an infection is determined, doctors must then try to distinguish between viral and bacterial causes, something this device cannot determine, although it can provide some clues.

After initial successful tests on 10 adult subjects, the team is now in the process of carrying out tests on pediatric patients to confirm the accuracy of the diagnostic results. Assuming the tests go well, the team hopes to commercialize the device. The ultimate cost, Carr said, will depend on the cost of the infrared imaging system—which is finding a variety of applications, including in the self-driving cars being developed by Google and other companies, because of its ability to see through fog and during night time. The cost of those devices, originally developed for military uses, has already fallen drastically over the last couple of years, she said, and widespread production could drop those costs rapidly.