While the risk of post-operative vision loss is relatively low, there are many medical specialists who believe more should be done to decrease the risk which is associated with many surgeries including cardiac, spinal, head and neck, orthopedic and those involving the optic nerve. One physician, David Anschel, who is Board-Certified in neurology, clinical neurophysiology and epilepsy, realized more needed to be done and invented the SightSaver Visual Stimulator. The device is FDA approved to facilitate the monitoring of the visual system during surgery. In use, it applies a light stimulus to the eyes to elicit an evoked response.

According to Dr. Anschel, “Each year, several thousand people in the United States develop post-operative visual loss. While the incidence is greatest following ocular and certain intracranial procedures, as well as spine and cardiac operations, it has been reported following many other operations, ranging from shoulder, peripheral vascular, and  joint replacement surgeries to radical neck dissection, total parathyroidectomy, osteosynthesis, gastroduodenotomy, abdominal exploration, thoractomy, axillary vein grafting, rhinoplasty, laparoscopic nephrectomy and other procedures including certain urological and gynecology procedures using robotics. There are approaches currently in use to mitigate the risk of post-operative vision loss, however, they have shortcomings which required a new solution. The SightSaver is designed to improve on those older methods.”

Older methods involve physically protecting the eyes using low quality, non-hygienic, uncomfortable and unreliable visual stimulators. By contrast, the SightSaver, which is manufactured in the USA by Anschel Technology, offers a hygienic, safe, comfortable and more effective alternative. Its use is especially warranted for the over two million higher risk operations performed annually in the US. It is not completely understood why some patients develop ischemic optic neuropathy following non-intracranial surgery, what is known are the risks of anterior and posterior optic nerve ischemia associated with certain surgeries. For example, cardiac surgeries bring risk factors of lower hematocrit, prolonged bypass times, large peri-operative weight gain from fluid infusion, and a higher rate of atherosclerotic disease. Spine surgery’s associated risk factors include prone position, Trendelenburg positioning, blood loss, prolonged procedure, use of vasoconstricting agents to correct blood pressure, direct ocular compression, and hypotension. If the suspected mechanism is an ischemia of the optic nerve, the better detection and intervention using visual evoked potentials (VEPs), a highly sensitive method for detecting optic nerve  dysfunction including ischemia, can be an effective preventive measure against post-operative visual loss.

Older methods of visual stimulation for the purpose of recording evoked responses in anesthetized patients rely on the use of goggles with embedded light emitting diodes which date back to the 1970s and had not been improved upon since then. Their shortcomings are well-recognized by surgeons and other medical professionals. They are relatively unhygienic as they are not disposable and therefore are reused from patient to patient. Fastened to a patient’s head with rubber straps, they are uncomfortable, often interfere with the surgical approach, and have been known to move or fall off during a surgical procedure. As a result, they fail to produce consistent responses in anesthetized patients, and pose a potential risk of damage to the eye.

In contrast, the SightSaver design features adhesive foam padding shaped to the contours of the periocular region. Its light source consists of high intensity light emitting diodes, which provide a much strong stimulus than current goggles. It interfaces and integrates seamlessly with a cable compatible with standard clinical neurophysiology systems used for triggering an LED goggle device.

Because it is a disposable device, it has superior hygienic advantages and eliminates the need for cleaning and sterilization between patients after each use in the operating room. Unfortunately, current devices do require this, but a significant problem has been detected in too many lapses in this procedures to the extent that The Centers for Disease Control and Prevention (CDC) and the U.S. Food and Drug Administration (FDA) recently issued a joint formal Health Alert to healthcare providers and facilities about the public health need to properly maintain, clean and disinfect or sterilize reusable medical devices. Clearly, the use of a disposable, self-adhesive visual stimulator eliminates this problem.

Other shortcomings of the reusable stimulating goggles come in the potential for damaging the eye, particularly during procedures where the patient is placed face down. The recommendation in prone spine surgery is that the use of any type of goggle be avoided.

The SightSaver was designed to add protection to the eyes rather than increase the risk of damage caused by goggles. Further, because of its form-fitting and self-adhesive features, the device facilitates more effective data acquisition and nearly eliminates any chance of displacement during a procedure.

The SightSaver also presents a strong economic value proposition to healthcare providers including hospitals, physicians (i.e., anesthesiologists, surgeons, neurologists). Its costs may be recovered by hospitals, possibly even at a profit. Further, in reducing the risk of post-operative visual loss, the device also promotes better patient outcomes and lower risks of potential litigation and related legal costs, as well as reputational damage and the associated costs. 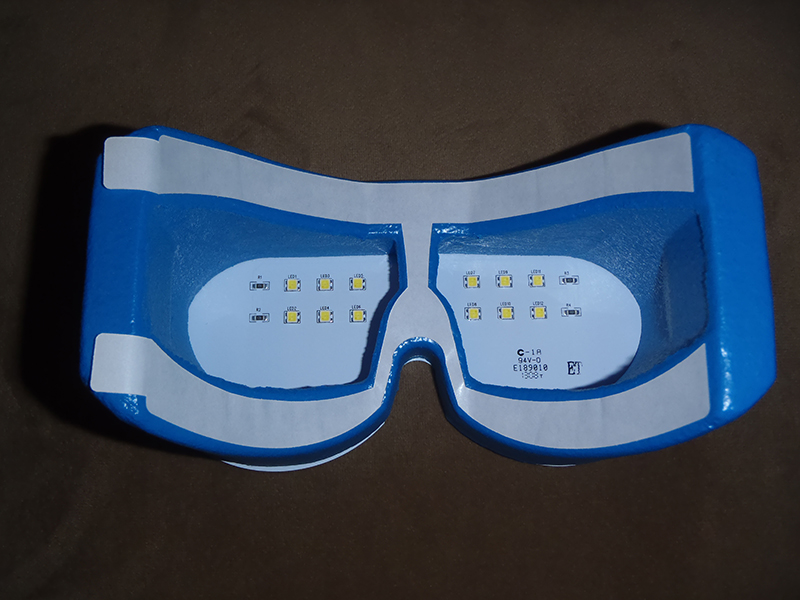