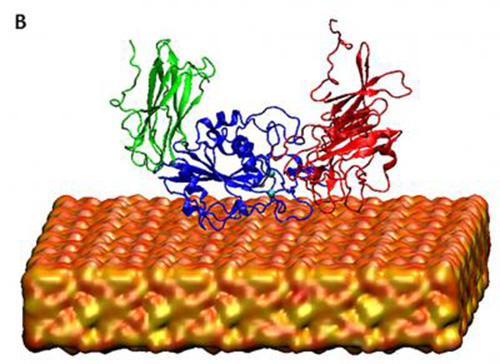 Some secrets to repair our skeletons might be found in the silky webs of spiders, according to recent experiments guided by supercomputers. Scientists involved say their results will help understand the details of osteoregeneration, or how bones regenerate.

A study found that genes could be activated in human stem cells that initiate biomineralization, a key step in bone formation. Scientists achieved these results with engineered silk derived from the dragline of golden orb weaver spider webs, which they combined with silica. The study appeared September 2017 in the journal Advanced Functional Materials and has been the result of the combined effort from three institutions: Tufts University, Massachusetts Institute of Technology and Nottingham Trent University.

Study authors used the supercomputers Stampede1 at the Texas Advanced Computing Center (TACC) of the University of Texas at Austin and Comet at the San Diego Supercomputer Center (SDSC) of the University of California San Diego through an allocation from XSEDE, the eXtreme Science and Engineering Discovery Environment, funded by the National Science Foundation. The supercomputers helped scientists model how the cell membrane protein receptor called integrin folds and activates the intracellular pathways that lead to bone formation. The research will help larger efforts to cure bone growth diseases such as osteoporosis or calcific aortic valve disease.

“This work demonstrates a direct link between silk-silica-based biomaterials and intracellular pathways leading to osteogenesis,” said study co-author Zaira Martín-Moldes, a post-doctoral scholar at the Kaplan Lab of Tufts University. She researches the development of new biomaterials based on silk. “The hybrid material promoted the differentiation of human mesenchymal stem cells, the progenitor cells from the bone marrow, to osteoblasts as an indicator of osteogenesis, or bone-like tissue formation,” Martín-Moldes said.

“Silk has been shown to be a suitable scaffold for tissue regeneration, due to its outstanding mechanical properties,” Martín-Moldes explained. It’s biodegradable. It’s biocompatible. And it’s fine-tunable through bioengineering modifications. The experimental team at Tufts University modified the genetic sequence of silk from golden orb weaver spiders (Nephila clavipes) and fused the silica-promoting peptide R5 derived from a gene of the diatom Cylindrotheca fusiformis silaffin.

The bone formation study targeted biomineralization, a critical process in materials biology. “We would love to generate a model that helps us predict and modulate these responses both in terms of preventing the mineralization and also to promote it,” Martín-Moldes said.

“High performance supercomputing simulations are utilized along with experimental approaches to develop a model for the integrin activation, which is the first step in the bone formation process,” said study co-author Davoud Ebrahimi, a postdoctoral associate at the Laboratory for Atomistic and Molecular Mechanics of the Massachusetts Institute of Technology.

Integrin embeds itself in the cell membrane and mediates signals between the inside and the outside of cells. In its dormant state, the head unit sticking out of the membrane is bent over like a nodding sleeper. This inactive state prevents cellular adhesion. In its activated state, the head unit straightens out and is available for chemical binding at its exposed ligand region.

“Sampling different states of the conformation of integrins in contact with silicified or non-silicified surfaces could predict activation of the pathway,” Ebrahimi explained. Sampling the folding of proteins remains a classically computationally expensive problem, despite recent and large efforts in developing new algorithms.

The derived silk-silica chimera they studied weighed in around a hefty 40 kilodaltons. “In this research, what we did in order to reduce the computational costs, we have only modeled the head piece of the protein, which is getting in contact with the surface that we’re modeling,” Ebrahimi said. “But again, it’s a big system to simulate and can’t be done on an ordinary system or ordinary computers.”

The Computational team at MIT used the molecular dynamics package called Gromacs, a software for chemical simulation available on both the Stampede1 and Comet supercomputing systems. “We could perform those large simulations by having access to XSEDE computational clusters,” he said.

“I have a very long-standing positive experience using XSEDE resources,” said Ebrahimi. “I’ve been using them for almost 10 years now for my projects during my graduate and post-doctoral experiences. And the staff at XSEDE are really helpful if you encounter any problems. If you need software that should be installed and it’s not available, they help and guide you through the process of doing your research. I remember exchanging a lot of emails the first time I was trying to use the clusters, and I was not so familiar. I got a lot of help from XSEDE resources and people at XSEDE. I really appreciate the time and effort that they put in order to solve computational problems that we usually encounter during our simulation,” Ebrahimi reflected.

Computation combined with experimentation helped advance work in developing a model of osteoregeneration. “We propose a mechanism in our work,” explained Martín-Moldes, “that starts with the silica-silk surface activating a specific cell membrane protein receptor, in this case integrin αVβ3.” She said this activation triggers a cascade in the cell through three mitogen-activated protein kinsase (MAPK) pathways, the main one being the c-Jun N-terminal kinase (JNK) cascade.

She added that other factors are also involved in this process such as Runx2, the main transcription factor related to osteogenesis. According to the study, the control system did not show any response, and neither did the blockage of integrin using an antibody, confirming its involvement in this process. “Another important outcome was the correlation between the amount of silica deposited in the film and the level of induction of the genes that we analyzed,” Martín-Moldes said. “These factors also provide an important feature to control in future material design for bone-forming biomaterials.”

“We are doing a basic research here with our silk-silica systems,” Martín-Moldes explained. “But we are helping in building the pathway to generate biomaterials that could be used in the future. The mineralization is a critical process. The final goal is to develop these models that help design the biomaterials to optimize the bone regeneration process, when the bone is required to regenerate or to minimize it when we need to reduce the bone formation.”

These results help advance the research and are useful in larger efforts to help cure and treat bone diseases. “We could help in curing disease related to bone formation, such as calcific aortic valve disease or osteoporosis, which we need to know the pathway to control the amount of bone formed, to either reduce or increase it, Ebrahimi said.