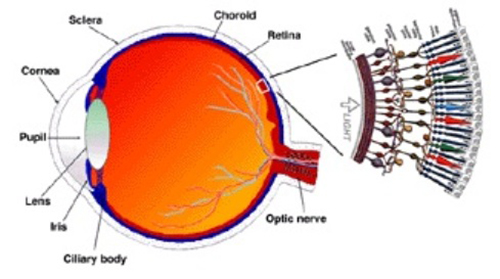 Computer simulations of electrical charges sent to retinal implants based on fractal geometry have University of Oregon researchers moving forward with their eyes focused on biological testing.

That is potential down-the-road good news for people facing vision loss from retinal diseases, such as macular degeneration that, alone, incurs costs exceeding $340 billion globally, according to the Brightfocus Foundation.

“What we’ve demonstrated is that using a fractal implant should allow us, in principle, to deliver 20/80 vision,” said physics professor Richard P. Taylor, head of the UO’s Materials Science Institute.

People with acuity of 20/80 are able to see objects at 20 feet away that those with normal or 20/20 vision can see from a distance of 80 feet. According to the Social Security Act in the United States, any person with a corrected vision of 20/200 or less is considered blind.

In their simulations, the UO researchers studied the performance of their bio-inspired implant, which would be inserted behind the eye’s retina. The implant features an array of fractal electrodes designed to stimulate retinal neurons. The results were published in the journal Scientific Reports.

Fractal objects have repeating patterns at many scales and are seen in nature in such things as tree branches, rivers, snowflakes, blood vessels and neurons.

The idea behind Taylor’s implant is to exploit electrodes that have the same fractal shape as the neurons with which they will interact. Currently used retinal implants feature electrode shapes based on traditional Euclidean geometry such as squares.

In human clinical trials with Euclidean-based devices, visual acuity has only achieved 20/1260 for implants placed in front of the retina. Only one patient achieved 20/546 with a device placed behind the retina; 86 percent of cases resulted in no restored acuity, the researchers noted in their paper.

In their computer simulations — done under a grant from the W.M. Keck Foundation – the UO researchers compared the ability of fractal and Euclidean electrodes to stimulate neurons in the retina. The fractal version stimulated 90 percent more neurons while using less voltage.

“Operating under identical conditions in our simulations, we’ve shown that a single fractal electrode stimulates all of the target neurons, while the Euclidean electrode connects with only 10 percent of them,” Watterson said.

Fractal implants, which act much like a pixel array at the back of a camera, can efficiently utilize more pixels within the confined space at the back of the eye, providing electrically-restored vision at a higher resolution, Watterson said. In retina-damaged eyes, the cones and rods that do such intermediate work disappear. The implants would stimulate the still-intact neurons.

There is a long way to go before achieving that reality in people, he said. The simulated results provide information that can help design miniature versions of the implants for testing in mice, where researchers hope to gain a preliminary measure of how well such devices may restore vision to humans.

“We want to make the pixel smaller but make use of fractal geometry,” he said. “In this study, we showed that by just doing a rearrangement of the top electrode into a fractal geometry then we can stimulate the neurons within the open-circuit voltage of silicon photodiodes.”

In the eyes, electrical charges come from incoming light.

Pursuit of a fractal-based retinal implant is covered under a U.S. patent, which applies to any fractal-inspired device designed for biomedical purposes. Taylor, the UO, Taylor’s research collaborator Simon Brown, and Brown’s home institution, the University of Canterbury in New Zealand, hold the patent.