Skin regeneration, either after injury or normally to replace dead skin, is difficult to observe at the cellular level. A new system–based on the Brainbow technology that labels individual neurons–genetically color-codes skin cells in zebrafish, allowing researchers to track cell populations in real time. The system, which they call Skinbow, is described March 21 inDevelopmental Cell. 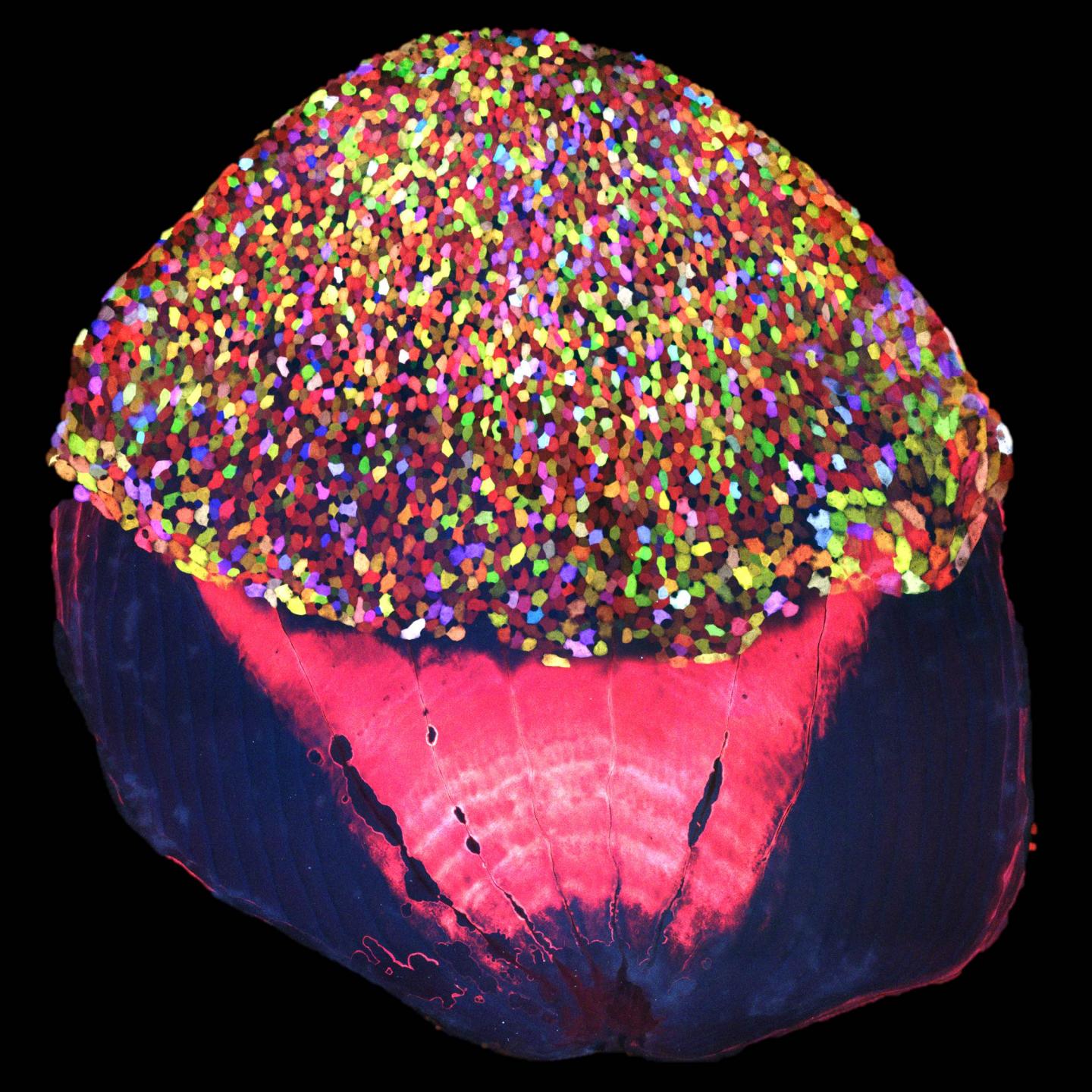 Many methods to observe the fate of individual skin cells rely on samples that are “snapshots” of cell growth and movement, which don’t tell the whole story. Live imaging of cells is possible but on a small scale. Poss and cell biologist Stefano Di Talia, also at Duke University, wanted to create a system that would allow for real-time imaging of large groups of cells.

The research team, with Duke postdoc Chen-Hui Chen and Alberto Puliafito of the Candiolo Cancer Institute, genetically engineered a line of zebrafish that expressed red, green, and blue fluorescent proteins in different combinations on the uppermost layer of skin cells–even in the epithelium covering the eye.

This skinbow line results in hundreds of potential colors for any given cell to display. At least 70-80 of these colors can be reliably distinguished from one another, says Di Talia, meaning that each cell is unlikely to share a color with its neighbors. The cellular color-coding shows up when the zebrafish are imaged with a microscope under red, green, and blue channels and the images are combined, though the animals have a reddish tint to the naked eye.

“In a very non-invasive manner, we can study single-cell dynamics over a timescale of several weeks,” says Di Talia.

The researchers examined the zebrafish under normal conditions, then subjected the study animals to a variety of injuries–ranging from mild alterations like skin exfoliation with a dry tissue to more severe injuries such as fin amputation–to watch how the cells responded. For example, after a zebrafish’s fin was amputated, the team observed the following sequence during fin regeneration: first, skin cells rapidly migrated from nearby areas to cover the injury site; second, new epithelial cells were produced to supplement the recruited cells; and third, the cells expanded in size to cover more space at the wound.

“We didn’t expect any of this, but with this type of imaging, you don’t need to have pre-set ideas or hypotheses,” says Poss. “You just need to be able to image and track cells and quantify the data.”

The Skinbow system could also be used to study skin cell behavior in different disease models or after drug treatments. “What we have developed in this study is a way to think about, and tools for analyzing, the behavior of individual cells,” says Di Talia.