Known as the RoBoSculpt, researcher Jordan Bos from Eindhoven University Technology built a prototype robot to help with cranial surgery, according to Phys Org. Every year more than 100,000 patients have minimal invasive procedures for infections and tumors in the brain. This procedure can take hours, as surgeons must proceed with caution for fear of striking nerves or major arteries.

The new drilling robot is equipped with a surgical drill and can move with precision along seven axes. The robot is guided by precise instructions from the surgeon, who specifies the drill site from CT images of the patient’s skull. Before surgery, the patient is correctly positioned, and an advanced arm is then in charge of holding the surgical drilling tool steady. 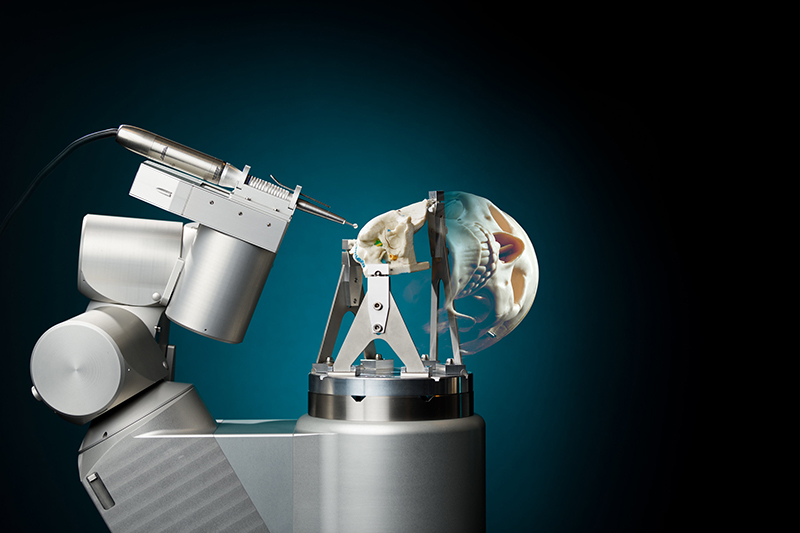 The skull bone surgery robot RoBoSculpt, developed by Jordan Bos of Eindhoven University of Technology. On the right there is a phantom piece of skull base; the remainder of the skull was added in virtually to show where this piece of bone is located. Credit: Bart van Overbeeke/Eindhoven University of Technology Read more at: https://phys.org/news/2018-04-robot-skull-base-surgery-alleviates.html#jCp

RoBoSculpt is able to work faster than a surgeon, which could drastically decrease the duration of operation times. The hope is this robot will provide more accuracy, shorten recovery times and result in fewer complications.

The ‘bot’ is actually a computer-controlled milling machine (CNC) due to the seven axes of motion. The high number of axes allows the robot to confront the problem from multiple angles, be extremely accurate and have a high level of stiffness with low weight and compact exterior. Most importantly, the robot can be covered with a sterile cover during operations.

Pre-clinical tests with the robot will begin this year at Radboud UMC, but actual surgery assisted with RoBoSculpt may take place in two to three years.

“This is an important step towards the operating room of the future,” says skull base surgeon at Radboud University Medical Center Dirk Kunst, who acted as co-supervisor for Bos, according to New Atlas. “RoBoSculpt is an optimal collaboration between the surgeon and the machine; they really complement each other to achieve the best results for the patient.”