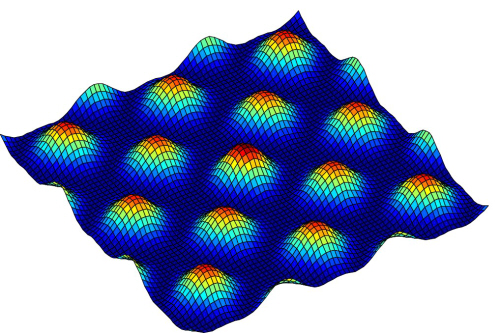 In a new study published today in Nature Communications, an interdisciplinary team from Bristol’s departments of chemistry, physics and engineering, have shown a non-contact method to pattern chemically encoded aqueous droplets into a two-dimensional array under water.

The method uses ultrasonic forces combined with droplet technology to spontaneously create a highly uniform pattern of low surface tension functional water-based droplets. The arrays can be thought of as a new type of highly parallel platform for performing high-throughput analyses in water for drug discovery, clinical diagnostics and protein crystallization. The ability to perform thousands of microscale experiments simultaneously will lead to more efficient lab-on-a-chip technologies.

Current patterning technologies require oil and water mixtures or exposure on a dry surface to achieve arrays of high surface tension droplets. This means that many water-based biochemical reactions are hard to perform. The new method circumvents these problems by patterning the water-based droplets in a water-filled chamber subjected to an acoustic standing wave.

By controlling the composition of the droplets and engineering the acoustic field, the researchers have produced highly uniform arrays of droplets or droplet aggregates arranged in square lattices. The droplet size, spacing and surface-attachment properties could be dynamically controlled and were reversible.  The droplets can also be loaded with proteins, enzymes, DNA, polysaccharides, nucleotides, nanoparticles or microparticles, and used in small-scale chemical reactions.

Bruce Drinkwater, Professor of Ultrasonics and Head of the Ultrasonics and Non-Destructive Testing (UNDT) research group, said: “As the coavervate droplets are formed they are gripped by the ultrasonic forces and patterned. The uniformity of the droplets is amazing. I’m convinced this technology will have many applications in the next generation of lab-on-a-chip applications.”

Professor Stephen Mann, from Bristol Centre for Protolife Research, added: “The acoustic patterning method significantly extends the scope of the current micro-array technologies. We should now be able to develop devices capable of sustaining chemical signals between the droplets as well as enabling spatial and temporal responses to changing conditions in the external environment. This will allow us to exploit the acoustically trapped liquid droplets as a 2D community of spatially organized membrane-free protocells.”