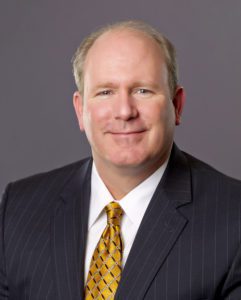 Jeffery McCaulley came to Smiths Medical with the job of turning a flagging medical device franchise around after years of negative growth. Getting rid of the wood paneling was another story.

McCaulley, a 25-year veteran of the medical device business, held executive level positions at Zimmer Holdings and Medtronic. However, there was nothing that taught him more about culture than his time at GE Healthcare.  Like so many of his colleagues in the industry, McCaulley started his career at the now Boston, Mass.-based corporate juggernaut, and serving under now GE CEO Jeff Immelt.

In this interview, we sat down with McCaulley to talk about corporate culture, why he thinks it’s so important, what he did to change the culture at Smiths Medical and his down-to-the-studs rebuild of the company’s Minnesota headquarters, where he replaced the wood-paneled executive offices of the past with a new, open flow, design that is built to foster innovation.

Brian Johnson: There’s a saying that ‘culture eats strategy for breakfast?’ Is that true?

Jeff McCaulley: Well, I certainly think it rings true. I think we’ve all seen great strategies fail, and I think, often times, it comes down to the culture. Because let’s face it, we’re all typically very excited about our strategies and believe in our strategies, but often times we’re less than enamored with the outcome. I think that rings true of most surveys that you see that most executives today feel that execution is one of the hardest things to drive. My sense is that really comes down to the culture.

Jeff:     I came to Smiths about 2 years ago, and through the recruiting process I was given 2 mandates: to re-engage people and to reignite growth. The company had been flat or declining for just about five years, so I knew that focusing on people and understanding why growth had stalled in a company that really has great brands and a solid portfolio.

There were a couple of approaches to buy the business, so I think there was a lot of disruption that had gone on within the culture. I knew coming in that in order to re-engage people we’d need to focus a lot on the culture.

I didn’t necessarily have a specific vision. So, I really spent my first 3 months just engaging people and listening. I was fortunate that when I came in we had just completed an employee engagement survey, so I had a lot of rich data in which to engage the organization around. Then we just held a lot of town halls, and really heard clear messages about why people were frustrated, what they thought was working, and not working. A lot of it had to do with leadership visibility, access, and communication. A lot of it had to do with empowerment. A lot of it had to do with priorities, or the lack of clear priorities, and so we really set out to tackle those things in helping the culture to thrive, and helping people to feel like they could be successful and execute according to the strategic plan or the operating plan.

Brian : I take it there’s a lot more than just taking a survey, and then maybe putting in a new coffee machine, right?

Jeff:     There’s a lot of ways that people can react to these employee engagement surveys. We wanted to take it very seriously, and we were very direct with employees that we took it seriously, and that we were listening, and that they were going to see us take specific action. We created a list of the things that employees told us were most challenging in the culture, and we created very specific responses to those things that we began address over time. We did it in the context of a broader initiative that we called ‘Building Our Future,’ which was really about building the company that everyone dreamed Smiths Medical could be.

Brian : You come out of a culture. You started your career at GE as many medical device CEOs have, under Jeff Immelt. What was it about that culture that created so many, I would say, incredibly high performing professionals who went on to head companies?

Jeff:     When I see a number of those (former GE employees) that you’re referencing we talk about it a lot. It was just a really special time. I think it was a neat time within the industry. I think it was a special time within GE. The leadership was really strong. There were great role models, and great mentors to learn business, and leadership, and how to operationalize the business. There was incredible alignment at the top, which I think was one of the most impressive aspects of GE. There was just an incredible commitment to developing people, but I think the most important thing was there was just this winning spirit about GE.

You hear people talk about culture as this idea of the beliefs and mindsets that really drive people’s behaviors. There was just a belief within GE that anything was possible, that the organization could accomplish great things, and ultimately would accomplish great things, and even wherever you were in the company you owned your little piece of the enterprise depending on where you were. When I started I had a very little piece of the enterprise, but you believed it was yours, and you had the ability to do great things with it. If you did you’d get more, and you’d get a chance to grow. I think that was just so pervasive within the culture.

Brian : I know one of the things that you’re really proud of is that you revamped the entire corporate headquarters at Smiths Medical. From that you’ve told me it seems like it was a pretty ambitious undertaking. How do you reflect some of these values in how you build a new headquarters?

Jeff:     I think this is probably the most visible example of changing the culture and becoming a new company. The facility very old. There was clear separation between the executives and everyone else. It was a hard place to collaborate because of the design and we really wanted to move to a culture where it was much more engaging, where there were a lot more interactions throughout the day, where there was more collaboration, more empowerment, and just more of a winning spirit within the building.

We really set out to create a new facility that I like to say is more like high tech than med tech. Traditionally more like what you would see at Google, and AT&T. In fact, we actually spent a lot of time with AT&T and their ‘Workspace of the Future’ initiative. They’ve spent a lot of time studying how technology teams work best together, so we learned a lot from what they had done over the years, and implemented a lot of that in our new facility. It’s a huge difference.

We got rid of most offices. There are many, many fewer offices. All offices are very small, 10 by 12, 10 by 14. The building is predominantly collaboration space and meeting space of all different varieties so that you give people different meeting venues, and extensive use of technology. It really feels like a different company when you walk in the door today, and there’s just a different buzz within in the culture, so it has had a dramatic impact on the business.

Brian : What was the downgrade from the old Chief Executive office to the new one in terms of square footage?

Brian : Did the old one have wood paneling on it? Just thinking of this very old-fashioned, midwestern bank feel.

Jeff:     It did. It was actually an old, I think, pharma building at one point, so it had some very old designs and some legacy aspects to it.