A nanofiber hydrogel infused with snake venom may be the best material to stop bleeding quickly, according to Rice University scientists.

The hydrogel called SB50 incorporates batroxobin, a venom produced by two species of South American pit viper. It can be injected as a liquid and quickly turns into a gel that conforms to the site of a wound, keeping it closed, and promotes clotting within seconds.

Rice chemist Jeffrey Hartgerink, lead author Vivek Kumar and their colleagues reported their discovery in the American Chemical Society journal ACS Biomaterials Science and Engineering. The hydrogel may be most useful for surgeries, particularly for patients who take anti-coagulant drugs to thin their blood.

“It’s interesting that you can take something so deadly and turn it into something that has the potential to save lives,” Hartgerink said. 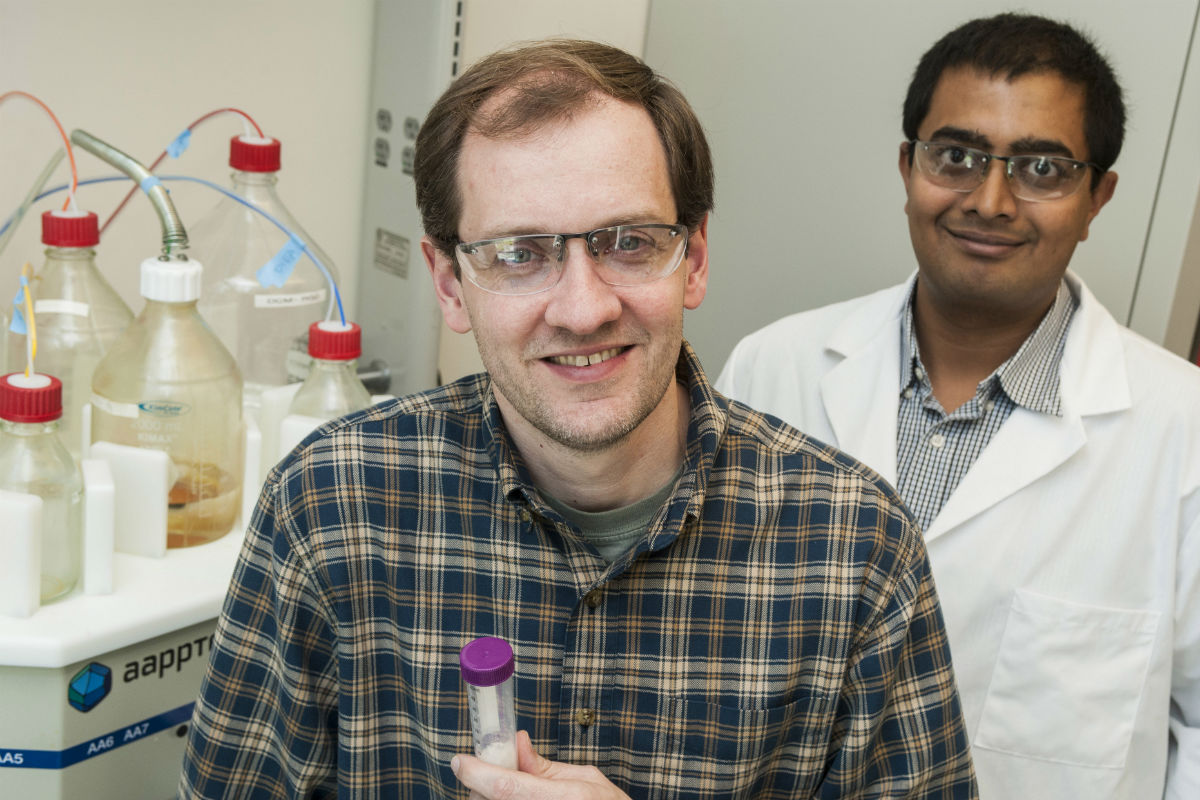 Batroxobin was recognized for its properties as a coagulant – a substance that encourages blood to clot – in 1936. It has been used in various therapies as a way to remove excess fibrin proteins from the blood to treat thrombosis and as a topical hemostat. It has also been used as a diagnostic tool to determine blood-clotting time in the presence of heparin, an anti-coagulant drug.

“From a clinical perspective, that’s far and away the most important issue here,” Hartgerink said. “There’s a lot of different things that can trigger blood coagulation, but when you’re on heparin, most of them don’t work, or they work slowly or poorly. That obviously causes problems if you’re bleeding.

“Heparin blocks the function of thrombin, an enzyme that begins a cascade of reactions that lead to the clotting of blood,” he said. “Batroxobin is also an enzyme with similar function to thrombin, but its function is not blocked by heparin. This is important because surgical bleeding in patients taking heparin can be a serious problem. The use of batroxobin allows us to get around this problem because it can immediately start the clotting process, regardless of whether heparin is there or not.”

The batroxobin combined with the Rice lab’s hydrogels isn’t taken directly from snakes, Hartgerink said. The substance used for medicine is produced by genetically modified bacteria and then purified, avoiding the risk of other contaminant toxins. 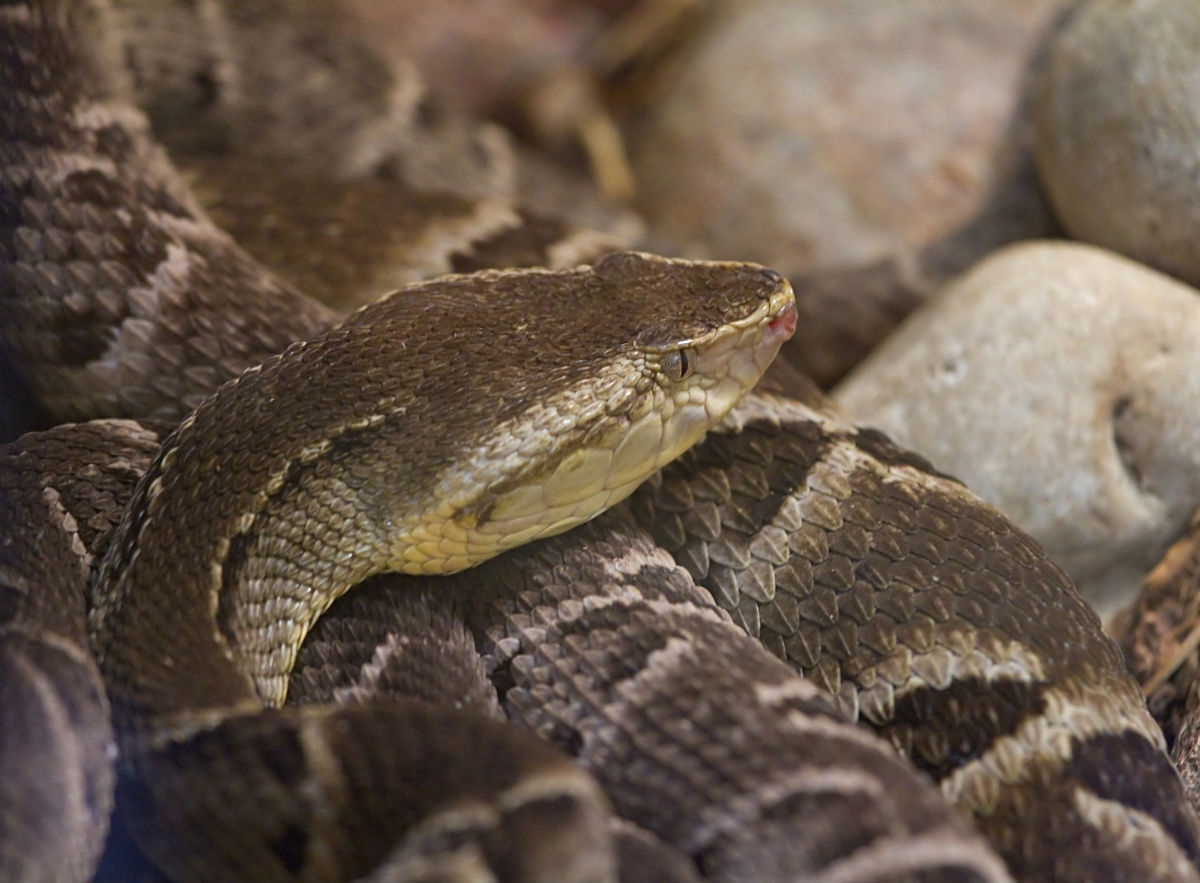 The Brazilian lancehead is one of several South American pit vipers that produce venom that has proven to be a powerful blood coagulant. Scientists at Rice University have combined a derivative of the venom with their injectable hydrogels to create a material that can quickly stop bleeding and protect wounds, even in patients who take anti-coagulant medications. (Credit: Greg Hume via Wikipedia)

The Rice researchers combined batroxobin with their synthetic, self-assembling nanofibers, which can be loaded into a syringe and injected at the site of a wound, where they reassemble themselves into a gel.

Tests showed the new material stopped a wound from bleeding in as little as six seconds, and further prodding of the wound minutes later did not reopen it. The researchers also tested several other options: the hydrogel without batroxobin, the batroxobin without the hydrogel, a current clinical hemostat known as GelFoam and an alternative self-assembling hemostat known as Puramatrix and found that none were as effective, especially in the presence of anti-coagulants.

The new work builds upon the Rice lab’s extensive development of injectable hydrogel scaffolds that help wounds heal and grow natural tissue. The synthetic scaffolds are built from the peptide sequences to mimic natural processes.

“To be clear, we did not discover nor do any of the initial investigations of batroxobin,” Hartgerink said. “Its properties have been well-known for many decades. What we did was combine it with the hydrogel we’ve been working on for a long time.

“We think SB50 has great potential to stop surgical bleeding, particularly in difficult cases in which the patient is taking heparin or other anti-coagulants,” he said. “SB50 takes the powerful clotting ability of this snake venom and makes it far more effective by delivering it in an easily localized hydrogel that prevents possible unwanted systemic effects from using batroxobin alone.”

SB50 will require FDA approval before clinical use, Hartgerink said. While batroxobin is already approved, the Rice lab’s hydrogel has not yet won approval, a process he expects will take several more years of testing.