Last year, Harvard’s soft exosuit team provided first proof-of-concept results showing that its wearable robot could lower energy expenditure in healthy people walking with a load on their back. Made of functional textiles, cable-based actuation and a biologically-inspired control system, the exosuit targets specific leg joints – instead of the full leg – and delivers assistance that is synchronized with the wearer’s walking mechanics in individuals ranging from people that carry heavy loads to people that are disabled by stroke or other health complications.

But the question still remained. What is the effect of increasing assistance levels on the overall energy savings to wearers? These savings are the result of the energy spared due to the assistive force provided to the ankle motions, and this must be balanced with the additional energy expended by the wearer when carrying the exosuit’s mass. 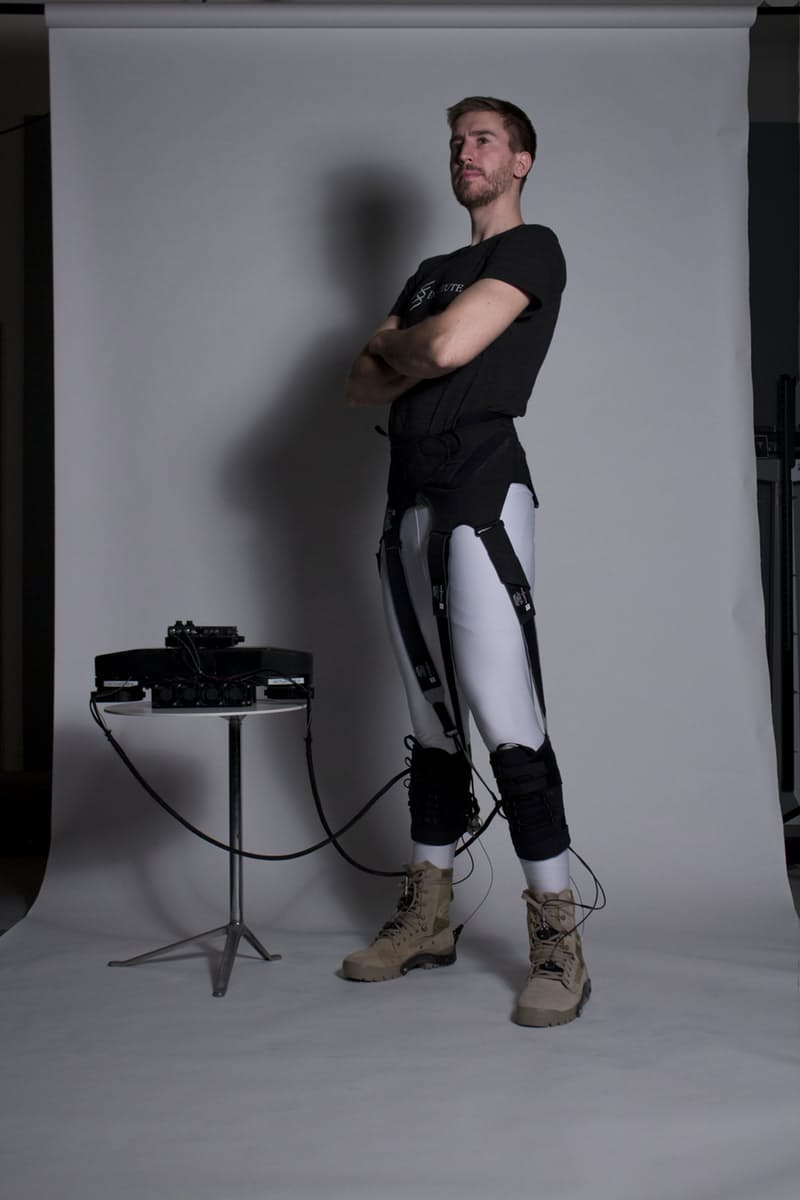 The Harvard team’s exosuit is a wearable robot that directly targets the ankle joints and is made of functional textiles, cable-based actuation and a biologically-inspired control system. In this version, actuation, electronics and battery units (shown on the left) have been off-boarded to better allow the researchers to quantify the exosuit’s energy-saving potential in healthy wearers. (Credit: Wyss Institute at Harvard University)

Now, in a new study published as the cover article in Science Robotics, Walsh’s multidisciplinary team of roboticists, engineers, biomechanics experts and apparel designers isolated the beneficial effects of the exosuit. By removing the actuation, electronics and battery units, leaving only the exosuit’s light wearable textiles and pulling cables, the researchers were able to calculate the impact on the wearers’ joints. The study is selected as the cover article of the issue.

“In a test group of seven healthy wearers, we clearly saw that the more assistance provided to the ankle joints, the more energy the wearers could save with a maximum reduction of almost 23 percent compared to walking with the exosuit powered-off,” says Walsh. “To our knowledge, this is the highest relative reduction in energy expenditure observed to date with a tethered exoskeleton or exosuit.”

Interestingly, the team found that wearers significantly adapted their gait with increasing levels of assistance. The changes were most significant at the ankle joint but also at the hip as the exosuit included straps coupling the assistance from the back of the lower legs to the front of the hip in a beneficial manner.

“Other studies had reported that there can be an energy transfer between the ankle and other joints. However, by having a textile couple the ankle and hip with our soft exosuit, may have amplified this effect, contributing to the considerable energy savings we found,” says Brendan Quinlivan, a graduate student working with Walsh and one of the two first-authors on the study.

The authors acknowledge that future studies are now required to compare the effects of fully body-worn versions of the exosuit, with the weight of the actuation and battery carried by the wearer, to walking with normal clothes to better quantify the true impact of the technology.

The exosuit’s soft textiles strategically position the actuating cables that assist with the ankle motion at the back of the lower legs and, through additional straps, transfer energy produced at the ankle to the front of the hip to also assist with the gait’s hip motion. (Credit: Wyss Institute at Harvard University)

“The results from this study will help us find a sweet spot between the added system weight and the amount of force applied to achieve maximum benefits in energy expenditure in wearers. Defining these interdependencies in healthy people will ultimately also help us design versions suitable for people with gait abnormalities,” says Sangjun Lee, who also is a graduate student in Walsh’s team and a co-first author of the study.

“This study represents another major step forward along a path that will bring this new type of ‘wearable robot’ into the marketplace where it will help soldiers and workers, as well as patients with disabilities,” says Wyss Institute Founding Director Donald Ingber, M.D., Ph.D., who is also the Judah Folkman Professor of Vascular Biology at Harvard Medical School and Professor of Bioengineering at Harvard SEAS.