Microfluidic devices hold potential to rapidly analyze cells for applications in medicine and basic research. Researchers have devised systems that can distinguish cells based on their size, deformability, and electrical properties, among other characteristics.

A team of MIT researchers has now developed a new way to sort cells, based on their acoustic properties — that is, how they are affected by sound waves, which depends on how dense and compressible the cells are.

These acoustic properties rely on cell content and structure, and are independent of the cells’ size, so this method can be used to separate cell types of similar size. Another advantage to this approach is that it does not require altering the cells in any way with chemical labels. 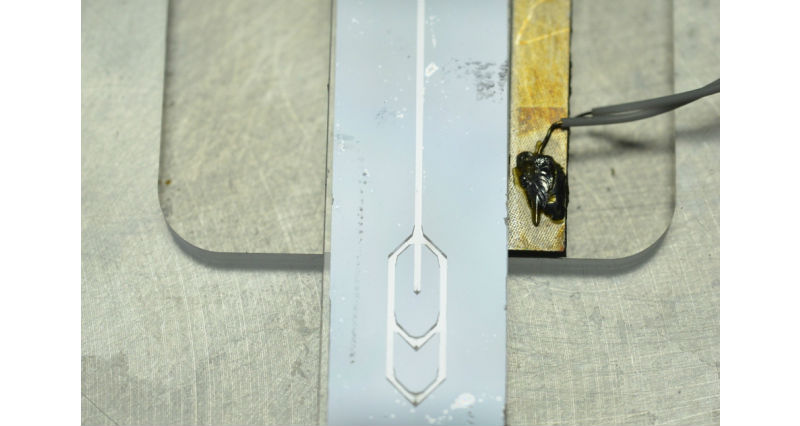 A new cell-sorting device consists of a microfluidic channel that vibrates at a very low frequency. As cells flow through the channel, they are pushed to a certain position depending on how they interact with the acoustic forces generated by the vibration. Pictured is an example of the device. (Courtesy of the researchers)

This technique could potentially be used to develop a handheld device that would make it easier and faster to do a test known as a complete blood count (CBC). This test, which currently requires blood samples to be sent to a lab for analysis, is often done to determine how many red blood cells and different types of white blood cells are present in a patient’s bloodstream.

“You could do a complete blood count that doesn’t require any labeling of the cells,” says Joel Voldman, an MIT professor of electrical engineering and computer science.

Voldman is the senior author of a paper describing this method in the May 16 issue of Nature Communications. The paper’s lead author is former MIT postdoc Per Augustsson, who is now a professor at Lund University in Sweden.

The new device consists of a microfluidic channel that vibrates at a very low frequency. As cells flow through the channel, they are pushed to a certain position depending on how they interact with the acoustic forces generated by the vibration.

Usually, this kind of gradient would eventually collapse because the denser liquid in the middle would spread outward. However, the researchers found that acoustic forces generated by tiny vibrations of the channel prevent that from happening. This density gradient forces cells to move sideways as they flow along the channel until they reach the correct zone.

“If we make the liquid super-dense in the middle and less dense at the edges, then the particles or cells will move until their acoustic properties match whatever the local environment is,” Voldman says.

Using this approach, the researchers found that they could distinguish three different types of white blood cells — monocytes, lymphocytes, and neutrophils — even though monocytes and neutrophils are very similar in size.

In addition to analyzing red and white blood cells, this technology could also be used for isolating tumor cells from a patient’s blood sample, perhaps to monitor the progression of cancer. The researchers also showed in this study that they can distinguish different types of tumor cells based on their acoustic properties.