Brian Patchett, a research assistant and instructor within the Department of Physics at Utah Valley University, will describe the group’s method, which uses sound waves to manipulate and probe cells, during the Acoustical Society of America’s Fall 2015 Meeting, held Nov. 2-6, in Jacksonville, Fla. 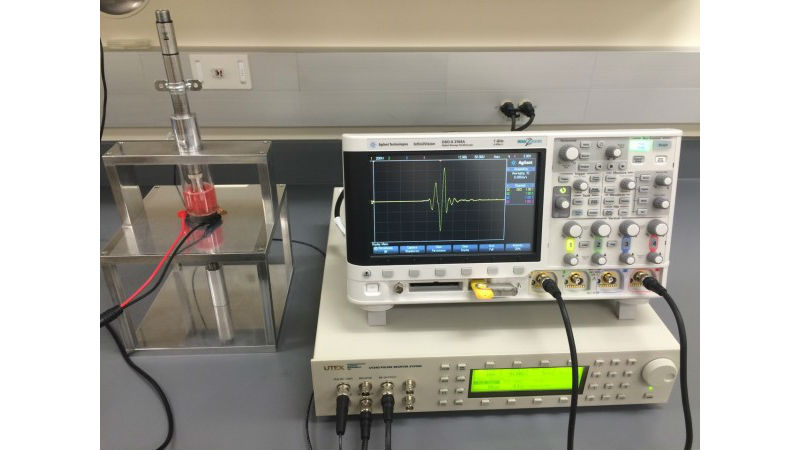 University Basic setup of the group’s acoustic levitation device during normal use with an ultrahigh-frequency pulser taking readings of the monolayer. (Credit: Brian Patchett/Utah Valley)

“An acoustic wave is a pressure wave so it travels as a wave of high and low pressure. By trapping a sound wave between a transducer — such as a speaker — and a reflective surface, we can create a ‘standing wave’ in the space between,” explained Patchett. “This standing wave has stationary layers of high and low pressure, a.k.a. ‘anti-nodes,’ and areas, ‘the nodes’ where the pressure remains the same.”

This standing wave allowed the group to acoustically levitate the cells and isolate them in manner similar to their natural state — as they would be within human tissue or the bloodstream. Previous work in this realm relied on “growing the cell cultures in a Petri dish, which tends to deform the structure, as well as create all sorts of interference,” Patchett said.

The significance of the group’s work is that it focuses on an unexplored method of measuring the properties of cells and how they change during the process of cancer and disease development. “The stiffness of the cell is the primary change detected with our high-frequency ultrasound; it reveals detailed information about the internal structure of the cell and how it changes in certain diseases,” Patchett said.

The group’s method can also help distinguish between different types of cancer — such as aggressive breast cancer vs. less aggressive forms. “By isolating the cells in a monolayer of fluid via acoustic levitation, we’re providing a better method for the detection of cell stiffness,” Patchett said. “This method can be used to explore the aspect of cells that changes during Alzheimer’s disease, the metastasis of cancer, or during the onset of autoimmune responses to better understand these conditions and provide insight into possible treatment methods.” 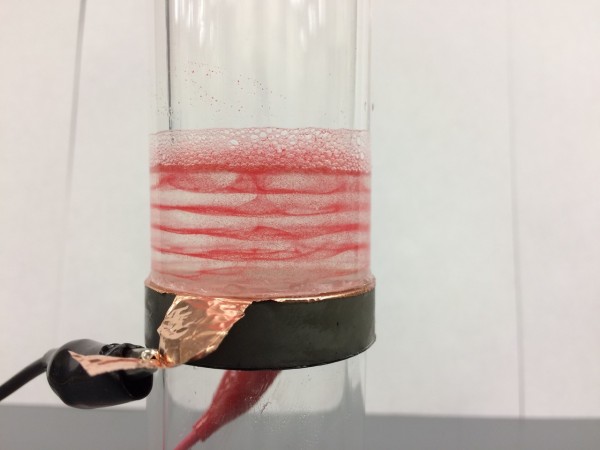 One of the group’s key findings is that “by manipulating the shape of the wave that we use for levitation in specific ways, we’re able to create more precise, sharply defined layers,” Patchett said. “And, borrowing from previous cell culture work done by our group, our high-frequency ultrasound method detects changes within the stiffness of cells with high accuracy. By isolating the cells in a levitated monolayer, we hope to see these changes more clearly so that we can gain a better understanding of what’s happening within the cell and why.”

What kinds of applications might this method find? “It’s a really fantastic research method for exploring autoimmune disorders,” pointed out Timothy Doyle, lead scientist on the project and an assistant professor of physics at Utah Valley University.

As far as other applications, the group’s method may find use in clinics, hospitals, and surgical centers as a way to immediately detect and characterize cancer or other diseases.

“Our method identifies aggressive types of breast cancer, for example, while in the operating room,” Patchett noted. “Faster than current pathology methods, it will enable doctors to ensure speedier assessments and more effective treatment plans for patients — personalized to their specific needs, which, in turn, will end up being more cost effective in the long term.”

In the near future, the group plans to apply their method to a wide range of biological materials, including white blood cells undergoing activation, which is part of the immune response to an illness.

“We’re collaborating with the Huntsman Cancer Institute — part of the University of Utah healthcare system — to explore various types of breast tissues under levitation to refine our pathology detection methods,” Patchett said. “Our goal is to provide potentially life-saving, personalized medical treatments based on our ability to quickly and effectively detect cancers and diseases in patients.”