Southern California in recent years provided the highest level of employment to medtech, according to U.S. Dept. of Commerce data compiled by OCTANe. 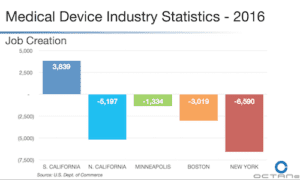 Bill Carpou, OCTANe’s president and CEO, presented the statistics during his welcome address at the Medical Technology Innovation Forum (MTIF) earlier this week. The area including Los Angeles, Orange County, and San Diego employed 33,820 people, outpacing other medtech hotbeds such as New York, Northern California, Minneapolis, and Boston by double. Here is the breakdown:

In addition to existing jobs, the region also saw positive job creation. The region created 3,839 jobs. By contrast, the other regions actually lost jobs. New York dropped over 6,000 jobs, Northern California lost more than 5,000, Boston lost around 3,000, and Minneapolis lost about 1,000. (See the table for details.)

For Carpou, these stats indicate a healthy and robust region that can accommodate new business ventures. For further proof, OCTANe found that the region filed 365 patents, only slightly outpaced by Northern California which saw 437 patent filings. He also pointed out that wages for Southern California are comparable to Boston and Minneapolis at around $80,000 per year, and not inflated to $119,000 as in Northern California.

OCTANe has further plans to spur economic growth in the region. In February, the accelerator released an impact report that details how it will aid that goal. For example, OCTANe announced its commitment to long-term job creation in Orange County and has pledged to help create a total of 22,000 jobs by 2025. It also plans to fund 506 companies, participate in 39 liquidity events, and infuse $3.6 billion in capital into regional medtech companies.