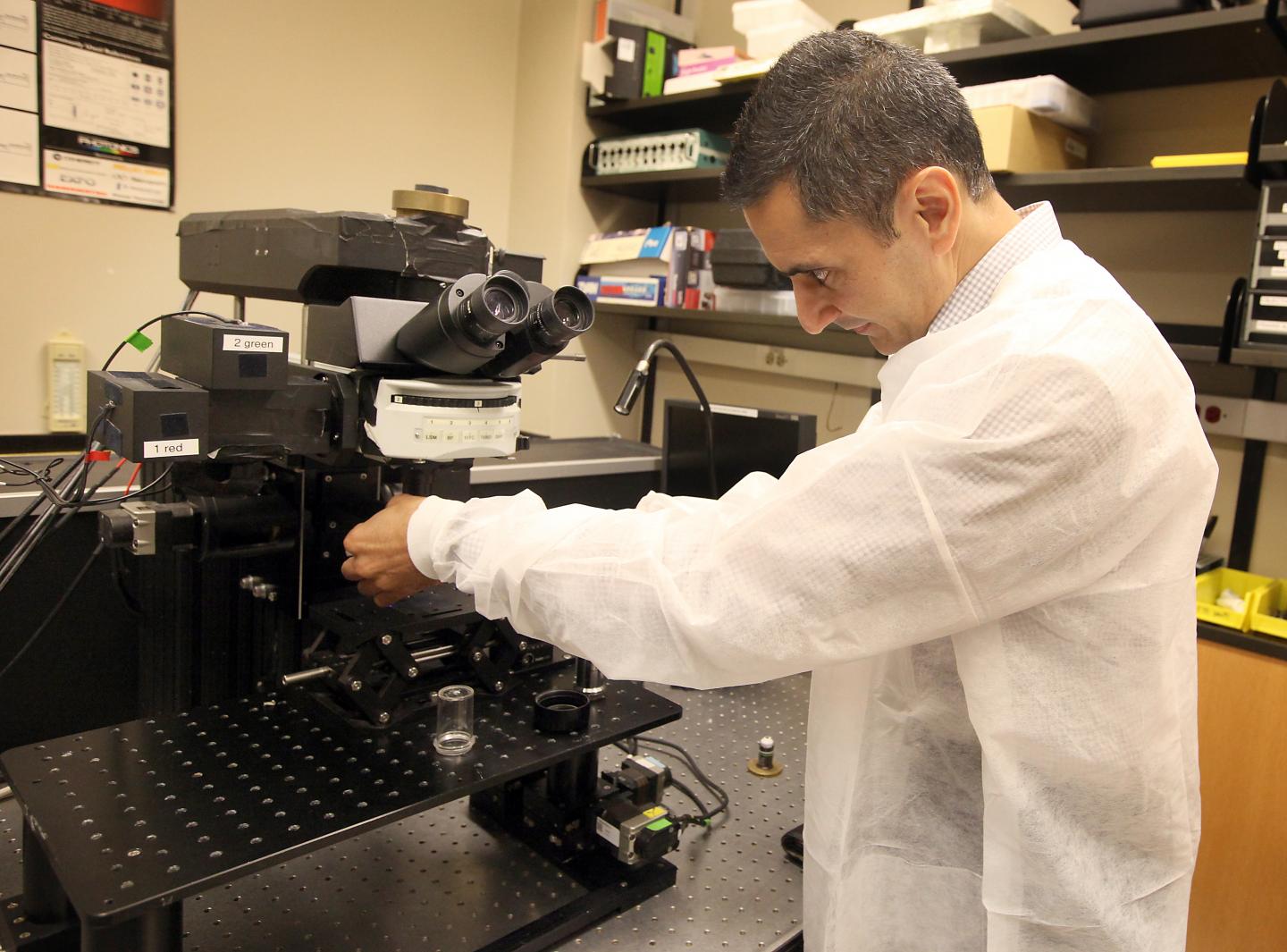 Optical technologies previously used to look at the stars in the sky will be miniaturized to look inside the brain, and could lead to new treatments for neurological diseases.

The technologies once used to make corrections to space telescopes, along with new lasers, will help answer a fundamental question, according to Prakash Kara, Ph.D., a researcher at the Medical University of South Carolina: “Is there a universal microcircuit that is repeated everywhere in the brain with regard to how neurons communicate with blood vessels?”

Kara is part of a team at MUSC that was awarded a $4 million grant from the National Science Foundation through its Experimental Program to Stimulate Competitive Research (EPSCoR). The grant will fund collaborative research between MUSC and the University of Alabama at Birmingham to map changes in blood flow when specific neurons in the brain fire.

Basic science research funded by the NSF often leads to discoveries that improve health care, Kara said. For example, this grant focuses on developing tools to determine the precise mechanisms by which neurons normally communicate with blood vessels in the brain. This neurovascular communication breaks down in many neurological diseases, so learning more about the mechanisms could lead to new avenues for treating those diseases.

The research comes at a time when scientists’ ability to image ongoing brain activity at a cellular and molecular level has finally come of age, according to the chairman of the MUSC Department of Neuroscience, Peter Kalivas, Ph.D. He’s working with Kara on the NSF-funded project.

“We will have a long-sought window on how the brain creates thoughts and behavior, as well as how the brain loses functions in diseases ranging from Alzheimer’s to schizophrenia,” Kalivas said. “Having answers at the cellular and molecular level allows us to develop pharmacological molecules to treat these diseases, and this new funding allows neuroscientists from MUSC and UAB to develop the latest imaging equipment techniques and recruit the top minds from across the nation.”

Kara said a lot of physics and optical physics technologies are now finding their way into neurosciences. All optical neuroscience will become mainstream in the next 10 years, he said, and MUSC and UAB will now have the chance to be at the forefront of that revolution.

“As you dream, talk or make decisions, for example, neurons in different parts of the brain become active,” Kara said. “Because there isn’t enough blood to send everywhere in the brain at the same time with the optimal levels of oxygen and glucose, the brain has a mechanism for increasing blood flow only to regions with increased activity. This increase in blood flow generates signals that can be measured using fMRI.”

What fMRI, or functional Magnetic Resonance Imaging, can’t tell researchers is exactly how many neurons are firing at any given time, and which neurons are triggering the changes in blood flow. Kara said part of the NSF grant will fund the purchase of new, high-speed laser imaging equipment, which could help his team get a lot more detailed information. “Our current technology doesn’t allow us to image very deep into the brain,” Kara said.

The laser in the new imaging system will pulse 80 million times per second at a wavelength of 1.3 micrometers, Kara said. “These properties allow the light beam to shoot deep into the brain at very precise locations without causing damage.”

That will allow his team to image faster and deeper, capturing larger volumes of the brain. “We can get more complete maps of neural and vascular circuits in action,” Kara said.

The award will fund more than equipment and lab work. The project includes an educational component that will be led by Furman University, teaching high school teachers and students about the importance and future of optical neuroscience. The project also opens the door to more employment opportunities at MUSC and collaborations among states, Kara said, which is an important part of the NSF mission.

The MUSC grant is part of $42 million dollars worth of funding from the NSF to eight teams of research groups across the country. The head of the EPSCoR program said the awards will enhance scientists’ ability to make new discoveries and increase learning opportunities for people in science, technology, engineering and math, also known as STEM fields. Only three of the awards were for brain research, including the award to MUSC.

Kara said the grant will not only set up new infrastructure for examining signaling between neurons and blood vessels but also initiate more specialized projects in health and disease that can benefit from high spatial and temporal resolution imaging.

“If we develop the best brain imaging technology, we will be more competitive for additional awards from the BRAIN Initiative, which hopes to revolutionize our understanding of the human mind and uncover new ways to treat, prevent and cure brain disorders like Alzheimer’s, schizophrenia, autism, epilepsy and traumatic brain injury,” Kara said.