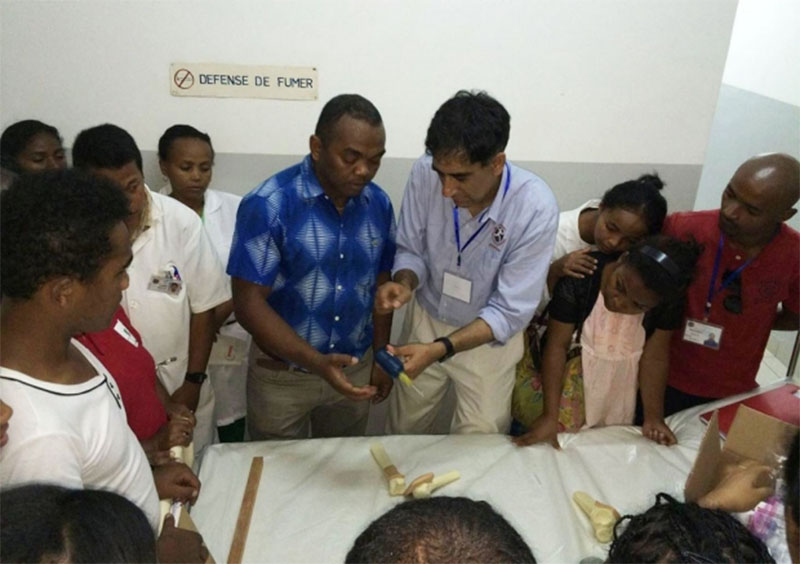 S.V. Mahadevan (center, right) teaches health-care Madagascar workers how to use a type of needle that penetrates bone to gain access to the circulatory system. Photo: PIVOT Madagascar

S.V. Mahadevan, MD, had no idea when he visited Madagascar two months ago that he would help save the life of an ailing newborn.

Associate professor and chair of emergency medicine at the School of Medicine, Mahadevan traveled to the island country in April to teach some medical procedures to health-care workers there, using simple equipment he had brought. Those same health-care workers put that training into practice in July to rescue a 2-month-old with a life-threatening infection.

“The best part is that while I was thousands of miles away, in some small way I had a chance to impact a baby’s life, which is fantastic,” Mahadevan said. “That is why we do global health. It’s a way of sharing the expertise we’ve gained over the years with our partners in other countries.”

Mahadevan visited Madagascar, one of the poorest countries in the world, at the invitation of economist and disease ecologist Matthew Bonds, PhD, a visiting professor of Earth systems science at Stanford who co-founded the nonprofit group PIVOT, which provides health care to the country’s rural poor. The two had met through Michele Barry, MD, director of Stanford’s Center for Innovation in Global Health.

Mahadevan spent a week in a remote area of southeastern Madagascar, teaching basic principles and demonstrating simple, life-saving procedures to health professionals at the government-run Ifanadiana District Hospital, which is supported by PIVOT. One technique involved the insertion of a needle into bone to gain access to the circulatory system. These needles are typically used to deliver fluids, antibiotics and other medications when a patient’s veins are inaccessible because of dehydration or other factors.

Mahadevan had brought a needle with him, as well as the instrument to insert the needle and a fake bone, for the health workers to practice on. He left the equipment behind when he returned to Stanford.

On July 8, he received an exuberant email from a physician there describing the rescue of a child using the intraosseous device. A chubby baby had been suffering from advanced meningitis and was so dehydrated that there was no way to access her veins. Relying on Mahadevan’s training, a Malagasy clinician, Tahiry Raveloson, MD, successfully inserted the intraosseous needle into the baby’s shin and was able to give the ailing newborn fluids and antibiotics. The caregivers were also able to feed her breast milk via a tube threaded through her nose to her stomach.

After a week, the baby began to recover, becoming conscious and alert, reported Charles Mead, MD, a PIVOT physician who mentors the Malagasy clinicians.

“This is a case where they didn’t have an alternative. Without the IV, she wouldn’t have had the fluids to survive,” Bonds said. In a thank-you email to Mahadevan, he said, “I am always dazzled by the ripple effects of that kind of generosity. It saves lives. It empowers our staff.”

These kinds of experiences give health-care providers in the developing world the confidence and ability to carry on in the face of many challenges, said Mahadevan, who founded Stanford Emergency Medicine International and has provided training and care in India, Cambodia, Mongolia and Myanmar, among other countries.

‘That sense of hope’

“When you are a health-care provider in a setting like that, there’s a lot of helplessness,” Mahadevan said. “You see someone come in, and there is nothing you can do, so the next time you just give up. So having something where you can intervene is not only incredible for the patient but also for the health-care provider. It gives them that sense of hope that they can make a difference and a desire to learn more of these interventions that are simple and easy to deploy and inexpensive and can really save a life. That stays with an institution long after someone has done a training.”

Bonds said the visit was a “big morale boost” for the staff, who receive training on standard protocols but don’t have a lot of access to high-quality training from experts like Mahadevan. Moreover, they operate in a country where per capita spending on health care is just $14 and child mortality is high. The area of island where Mahadevan taught the procedures has a population of 30,000 children younger than 5. He said 5,000 would likely die in the next five years from preventable illnesses, such as diarrheal disease, malaria and respiratory infections. But with PIVOT’s help, he hopes to see that number reduced by half.

He said the nonprofit could benefit from additional equipment and is looking for funding to help purchase more intraosseous needles, which cost about $200 apiece. He estimated that six patients every month — both adults and children — could be saved through use of the simple device.