A new system has been developed to make it possible to run fast EEG tests at accident scenes or in ambulances. Potential head traumas can be assessed and action taken at an early stage.

Two footballers clash heads and one of them is left lying on the pitch. How badly is the player hurt? Will he be able to carry on playing?

The medical team rushes from the sidelines and carefully places a helmet on the player’s head. Shortly afterwards he is carried off the pitch. A concussion has been established and he must be kept absolutely still.

“Highly-paid players are under pressure to carry on playing”, says Frode Strisland at SINTEF. “But a concussion must be taken very seriously. A player must take the time necessary to convalesce if he wants to be ready to play again as quickly as possible”, he says.

EEG at the Scene
The Norwegian company Smartbrain, which works with EEG-based diagnoses, came up with the idea to develop a portable system that could detect concussion at an early stage so that the right treatment could be given as soon as possible. With a patented idea for a new method of running EEGs, the company launched an EU-funded project which has just been completed.

“Our system, called EmerEEG, is special because it offers the opportunity to run EEGs really quickly”, says Haldor Sjåheim at Smartbrain. “The diagnostics and outcomes for many patient groups in the field of emergency medicine will be improved, especially in cases of head trauma and strokes”, he says. “Currently, we can’t be sure of a patient’s status before some time has passed – when he or she has arrived at the hospital. This can result in delayed injury and prolonged periods of convalescence”, he says.

Students at Oslo Architecture and Design College have been working on the ergonomic aspects of the helmet and how it can be adapted for use in ambulances and emergency situations. Ambulance personnel at the Accident and Emergency clinic in Oslo who took part in the project were positive to this innovation and said that it would help them with many of the challenges they face. 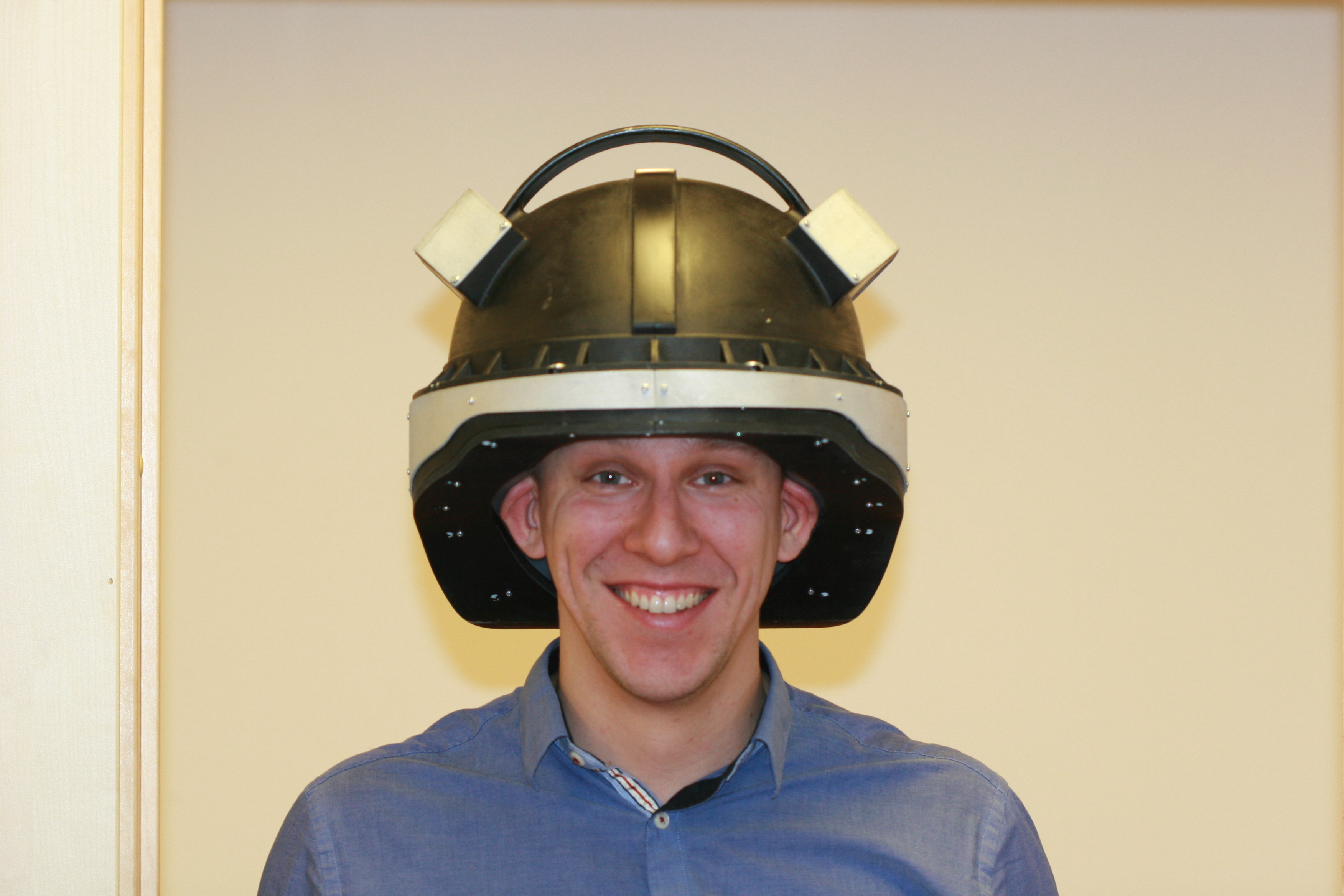 The prototype of the helmet is large – weighing in at 4.5 kilos – and reminds of something out of Star Wars. (Credit: SINTEF)

Stimulation System
Professors Andrea Aantal and Walter Paulus from Gøttingen University Hospital are also taking part in this EU project. Both are world leaders in research into Transcranial Electrical Stimulation, which is a new approach to neurostimulation being used to treat a variety of clinical conditions and regulate brain activity.

Weak electrical stimulation using 32 electrodes makes it possible to stimulate or suppress brain activity, and this may be of help in treating conditions such as depression, tinnitus, migraine and speech dysfunction following strokes.

Big Scale
Frode Strisland shows me the prototype developed during the project. The helmet is large – weighing in at 4.5 kilos – and reminds me of something out of Star Wars. However, this is typical of what we would expect of an initial prototype.

“In the development and testing phase we have to work on a bigger scale and with more materials”, says Strisland. “But experience tells us that it will be possible to make the system light and portable”, he says.

Some years ago, SINTEF researchers assisted Smartbrain with a requirement specification for what a system of this type would consist of. In the EU project they have been responsible for the instrumentation system and all the helmet’s electronics.

Fast and Completely Automatic
An EEG (electroencephalogram) test involves placing electrodes around the patient’s head in order to measure electrical signals emitted by the brain. Traditionally, such tests are time-consuming and require a lot of preparation to ensure that the signals recorded are adequate. A cap fitted with, for example, 19 electrodes is first placed on the patient’s head. A conducting gel is then injected at each of the electrode points in order to achieve a good electrical contact. After a test has been completed the gel has to be cleaned from all the electrode contacts to prevent corrosion and help extend their lifetimes. Interpretation of the signals is also a demanding process, and can usually only be carried out by a hospital doctor who specializes in EEGs and their interpretation.

In the new system developed during this project, Smartbrain has focused on developing a device that makes assembly fast and recording completely automatic. An elastic membrane is fitted inside the helmet which ensures that the same pressure is applied to all parts of the scalp. If a negative pressure is then applied within the helmet, the membrane will inflate to enable the helmet to be placed on the patient’s head. A conducting gel is then released to establish electrical contact and signal recording can begin after about a minute.

Comparisons with a Database
In order to determine if a patient has been injured, the results are compared with a database of signals typically emitted by people known to have head injuries. Based on this comparison, the system assigns a “score” indicating the likelihood of the patient having suffered a head injury. Since the system is completely automatic it will be possible for ambulance personnel to use the system unassisted. The EEG will be transferred via a telenetwork to a hospital so that EEG specialists can assess the patient and, if necessary, take decisions about treatment.

“The EmerEEG system we have developed is all-inclusive”, says Frode Strisland. “Simply getting 19 electrodes automatically to establish contact with a wide variety of head shapes is a challenge in itself”, he says. “For use in ambulances and at accident scenes the helmet has to be robust and able to withstand rough treatment. It must also function under all kinds of weather conditions. The EEG signals we record are measured in microvolts. They must be interpreted accurately if the patient and health personnel are to be confident that the right conclusions are arrived at”, says Strisland.

The Way Ahead
A consortium has now been granted the rights to the project results which it intends to exploit as part of further work. These corporate partners are now considering working together to advance development of the helmet, but they also want to exploit the know-how and results as a means of improving their own products and services in the fields of industrial design, manufacture and distribution.

Haldor Sjåheim tells that since the technology is universal, Smartbrain is currently working in several fields of application. “We want to make advances on the medical front, but we also see opportunities in the games market and in brain-computer interface systems”, he says. We’re also looking into opportunities to identify the right investors and are working on applications for new EU project funding as part of the Horizon 2020 program.

When I asked if he intends the helmet to be a standard fixture in ambulances, Sjåheim responded by saying that the project’s German partner Meytec, which is a pioneer in the development of future ambulance telemedicine systems and equipment, wants to include the EmerEEG technology as the standard EEG system in its ambulance concept.