Brain-machine interfaces provide one way to connect with the brain and nervous system, but because electronic devices are often stiff, planar, and rigid, they can cause injury to the brain’s soft tissue. It’s been extremely challenging to develop a material and fabrication method that is flexible enough to meld with the brain, but adhesive enough to stay in one place – until now.

Chris Bettinger, Associate Professor of Materials Science and Engineering and Biomedical Engineering at Carnegie Mellon University, and his group have created a hydrogel material and fabrication process for electrodes that stick to the brain, matching its soft, squishy makeup, and making them less likely to cause brain injuries while stimulating or recording the nervous system.

Rigid electrodes will detect when neurons are firing and records the voltages associated with those firing neurons, but over time, the body interprets this material as an injury or a foreign body that needs to be attacked, degraded, isolated, and removed. Inflammatory cells then surround the probe, disrupting the signal strength of the neurons in that area.

“Imagine you have a bowl of Jell-O, and you insert a rigid plastic fork into the bowl and move it around,” says Bettinger. “It’s going to damage the Jell-O, producing defects and irreversible structural changes. That situation is analogous to inserting a rigid electronic probe into soft tissue such as someone’s brain. It’s a combination of what we call micro-motion and mechanics, which work together to not only damage the brain, but also compromise the function of the implanted sensor.” 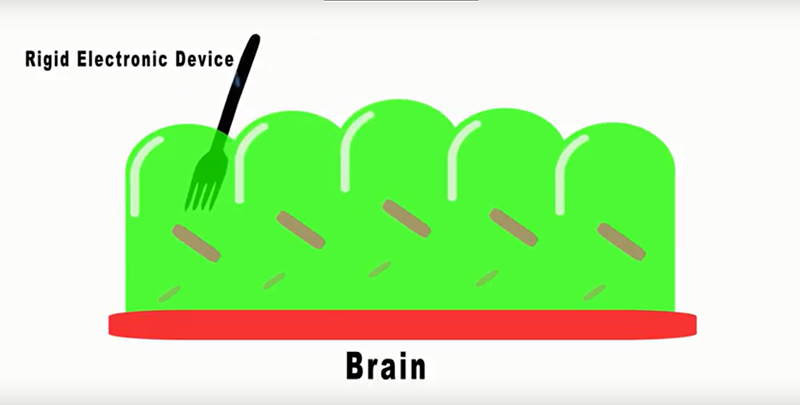 “If we could fabricate electronic devices that have mechanical properties closer to Jell-O rather than wood or plastic, then we can surreptitiously interface neural probes with the brain in a more benign manner,” says Bettinger. “New materials can bring new solutions to meld synthetic devices with the human body seamlessly and transform our understanding of diseases and scientific methodologies to ultimately extend human life.”