Doctors at Ronald Reagan UCLA Medical Center have implanted a spinal stimulator that is showing early promise in returning hand strength and movement to a California man who broke his neck in a dirt-biking accident five years ago.

Brian Gomez, 28, became one of the world’s first patients to undergo surgery for the experimental device in June 2016.

UCLA scientists positioned the 32-electrode stimulator below the site of Gomez’s spinal-cord injury, near the C-5 vertebrae in the middle of his neck. That’s the area most commonly associated with quadriplegia, or loss of function and feeling in all four limbs.

“The spinal cord contains alternate pathways that it can use to bypass the injury and get messages from the brain to the limbs,” says Daniel Lu, MD, PhD, an associate professor of neurosurgery and director of UCLA’s neuroplasticity and repair laboratory and the neuromotor recovery and rehabilitation center. “Electrical stimulation trains the spinal cord to find and use these pathways.”

While other devices have shown promise recently in treating paralysis, these approaches involved animals or relied on robotic arms. This approach is unique because the device is implanted in the spine instead of the brain, and is designed to boost patients’ abilities to move their own hands.

Lu likens the approach to a commute on a busy freeway. “If there is an accident on the freeway, traffic comes to a standstill, but there are any number of side streets you can use to detour the accident and get where you are going,” he says. “It’s the same with the spinal cord.” 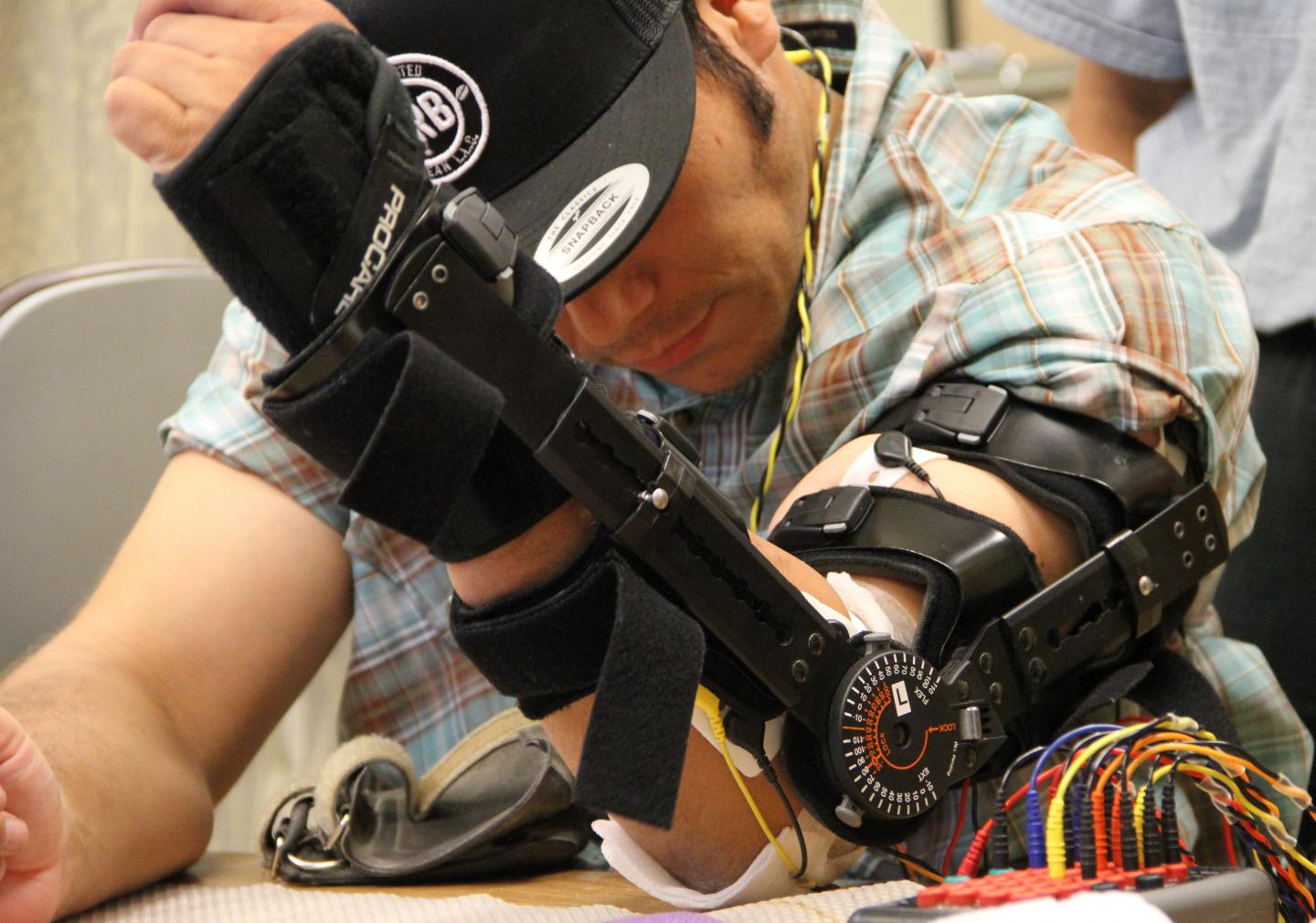 In addition to the stimulator, doctors implant a small battery pack and processing unit under the skin of the patient’s lower back. Small enough to fit in the palm of your hand, the implant is paired with a remote control that patients and doctors use to regulate the frequency and intensity of the stimulation.

“We can dial up or dial down different parameters and program in the stimulator certain algorithms to activate specific electrodes,” says Lu. “It is an ongoing process that retrains the spinal cord and, over time, allows patients to strengthen their grip and regain mobility in their hands.”

The UCLA team performed the world’s first implant surgeries of this kind on two cervical spinal-cord injury patients prior to Gomez. Lu and his colleagues saw an increase in finger mobility and grip strength of up to 300 percent.

The current study is funded by the National Institute of Biomedical Imaging and Bioengineering, part of the National Institutes of Health. Lu is working with UCLA neuroscientist Reggie Edgerton, PhD, to build upon the success of their previous findings in patients with lumbar spinal-cord injuries.

“We’d used electrical stimulation to recover paraplegic patients’ abilities to stand and move their legs on their own following injury to the lower spine,” says Edgerton, a distinguished professor of integrative biology/physiology and neurosurgery at UCLA’s David Geffen School of Medicine and College of Letters and Science. “There was considerable skepticism in the field that we could use a similar approach to regain hand function in quadriplegic patients with injury to the upper spine. Brian’s strong response to the implant has been very exciting.”

“It’s making a huge difference for me,” says Gomez, who owns a coffee-roasting business in his hometown of San Dimas, California.

“I use an industrial roaster that heats up to 450 degrees and just a few months ago, I reached up to pull a lever to empty a batch of beans after they’d finished roasting,” says Gomez. “But because I didn’t have the arm or core strength, I burned myself,” he said pointing to a scar on his forearm. “That doesn’t happen anymore because of the strength and dexterity I’ve developed.”

Gomez’s improvements are especially encouraging given the five years that passed between his injury and surgery. People who suffer spinal-cord injuries usually have a window of only a few months to get the rehabilitation they need in order to maintain at least partial use of their hands. Meaningful improvement is rare more than a year after injury.

“Even though he was injured in 2011, in many ways Brian is a perfect candidate for this experimental treatment. He still has head-to-toe sensation, so he can give us feedback as we fine-tune the stimulator. And he is such a positive and motivated young man,” says Lu.

Several times a week, Gomez returns to a laboratory at UCLA, where a team of scientists put him through rehabilitation exercises and continue to fine-tune the stimulator. “It takes a lot of time and commitment to do this, but I’m determined,” says Gomez. “Things are about to change for the better, so I’m excited about what’s to come.”

The UCLA team’s goal is not to fully restore hand function, but to improve it enough to allow patients to perform everyday tasks — still a remarkable achievement considering the length of time since their injuries. As the technology develops, patients might be able to expect further improvements.

Researchers evaluate hand strength by measuring a unit known as a newton of force.

“A normal hand is able to impart about 100 to 200 newtons of force, but after an accident, that often drops to only 1 or 2 newtons of force,” says Lu. “Our goal is to get these patients back to the 20 to 30 range. That will allow them to do everyday tasks and will make a huge difference in the quality of their lives.”

Tasks like tying their shoes and brushing their teeth. Or, in Brian Gomez’s case, holding and sipping a cup of coffee that he roasted and brewed himself.