Making football safer may not only be about the equipment players wear; it could have just as much to do with the turf under their cleats. This systemic approach to improving safety in football was highlighted last week when GE, the National Football League and Under Armour announced the three final winners of Head Health Challenge II. In an open competition, the University of Washington, Viconic Sporting and the Army Research Laboratory bested four other finalists to find innovative approaches for preventing brain injury and tracking head impacts in real time. 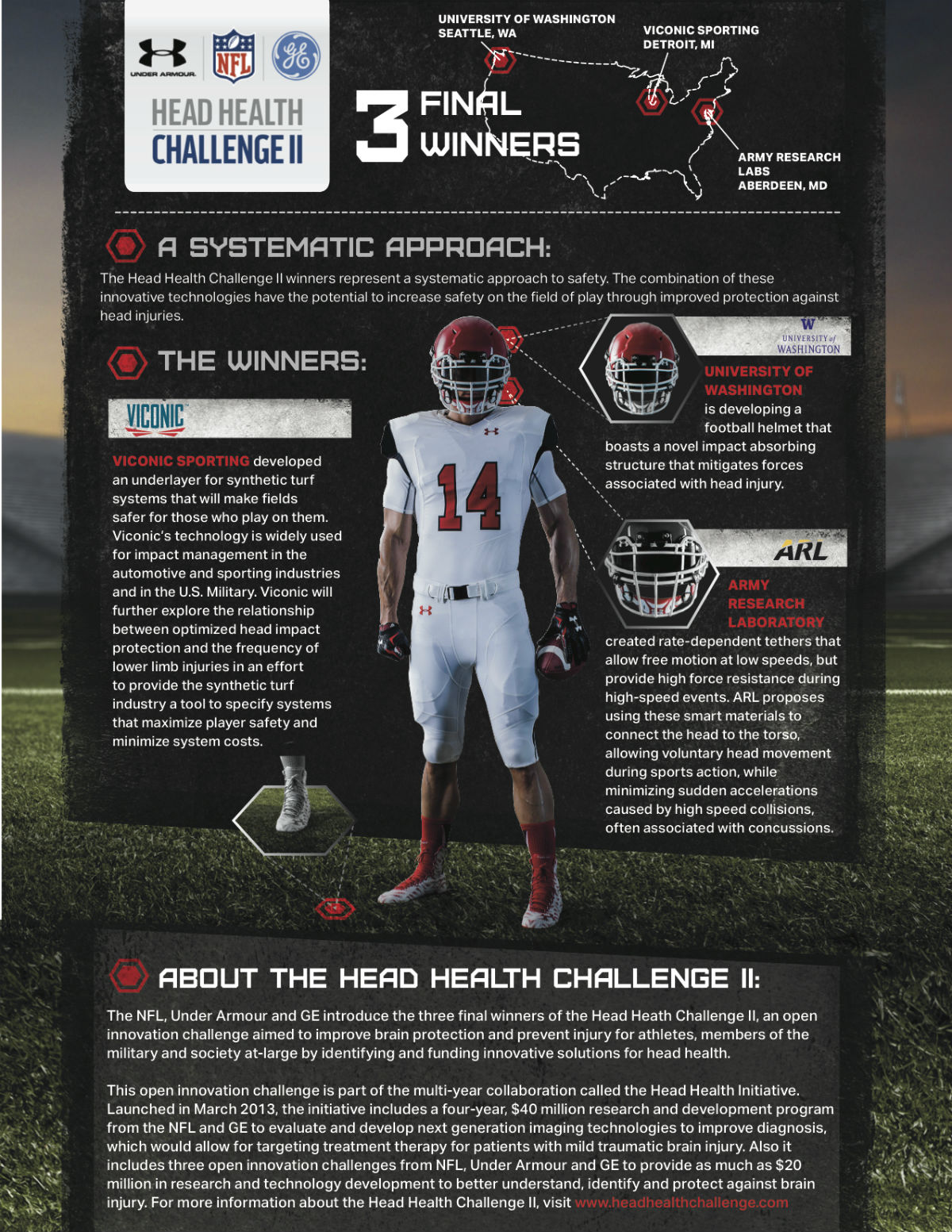 At Detroit’s Viconic Sporting, researchers are developing a layer meant to be installed under synthetic turf to make fields safer for players. The company’s engineers have developed a “shockpad” that can be used under turf and playgrounds to reduce the risk of injury for all players, from youth to professional athletes. The material is studded with small hollow cones that can crush down to 10 percent of their original height to absorb force. It’s already widely used in the automotive industry and in military applications to better protect today’s soldiers.

“Viconic’s underlayer acts like a spring underneath the artificial turf surfaces, absorbing the energy of an impact and reducing the risk of injury,” says Joel Cormier, the company’s director of development engineering. “We have engineered our system to ensure we don’t change the playability of the surface, so players can continue to focus on their performance.”

Viconic will use the award money to develop the material further and optimize head-impact protection while minimizing the chances of lower-limb injuries.

University of Washington and allied private sector researchers, meanwhile, are developing a new impact-absorbing helmet designed to mitigate the type of forces most likely to cause skull fractures and traumatic brain injuries. They are testing industrial design elements created specifically to slow the head’s acceleration after an impact. The intention is to build gear for elite pros, then extend the product line down to high school and youth players.

“The next innovation in football-helmet technology is long overdue,” says Dave Marver, CEO of Seattle’s VICIS, which is developing the technology. “Our helmet features a novel impact-absorbing structure that performs very differently than today’s helmets, but offers the style, performance and overall experience players desire.”

Engineers and scientists at the Army Research Laboratory in Aberdeen, Md., round out this challenge’s winners. They propose using smart materials to make tethers that connect a player’s helmet to the torso. The material is built to stretch when pulled at slow or moderate speeds, such as during normal sports action. But when pulled quickly, as when a player’s head snaps back during a backwards fall, the material offers enough resistance to prevent the back of the head from a hard, injury-causing head-to-ground impact.

The team’s conceptual prototype uses a close-fitting body harness and a snap-in helmet insert to connect the tethers between the helmet and the body. Eric Wetzel, who works for the Army developing materials to protect soldiers, realizes that an entirely new piece of equipment might not be viewed favorably by football players. “Athletes could certainly run faster and jump higher if they wore no helmet, if they wore no pads, but they’ve learned to live with certain compromises to protect their well-being,” he says. “This has the potential to be the next generation of protective devices.”

The next step for the winners is to carry through with the challenge’s intent: prepare for market. All three Head Health Challenge II-winning teams still have work to do before the new helmet, turf underlayer or protective head tethers see any time on the playing field. Still, they open the door to a new era of safer football.