Rice University students have created a prototype of a device to monitor the pulse and oxygen levels of a fetus undergoing endoscopic fetal surgery in a mother’s womb.

The WombOx team of senior engineering students worked in close collaboration with the Texas Children’s Fetal Center to create their device, which miniaturizes the components found in a pulse oximeter commonly clipped to a patient’s finger in a doctor’s office.

Pulse oximeters “see” oxygen levels in the blood by comparing light from a source to the light that reaches a detector on the other side of the finger. The instrument can calculate oxygen saturation by how much light it senses is absorbed by the tissue.

That kind of information hasn’t been available to doctors working to help fetuses suffering from congenital defects such as spina bifida, the incomplete closure of the backbone around the spinal cord.

Texas Children’s Hospital is pioneering efforts to treat such conditions through the endoscopic procedure known as fetoscopic surgery. During surgery, doctors are able to monitor the health of a fetus through ultrasound, but that only gives them a basic heartbeat. Knowing oxygen levels in the blood is critical when doctors need to act quickly to help a fetus in distress, and the WombOx device shows potential for providing such data in real time. 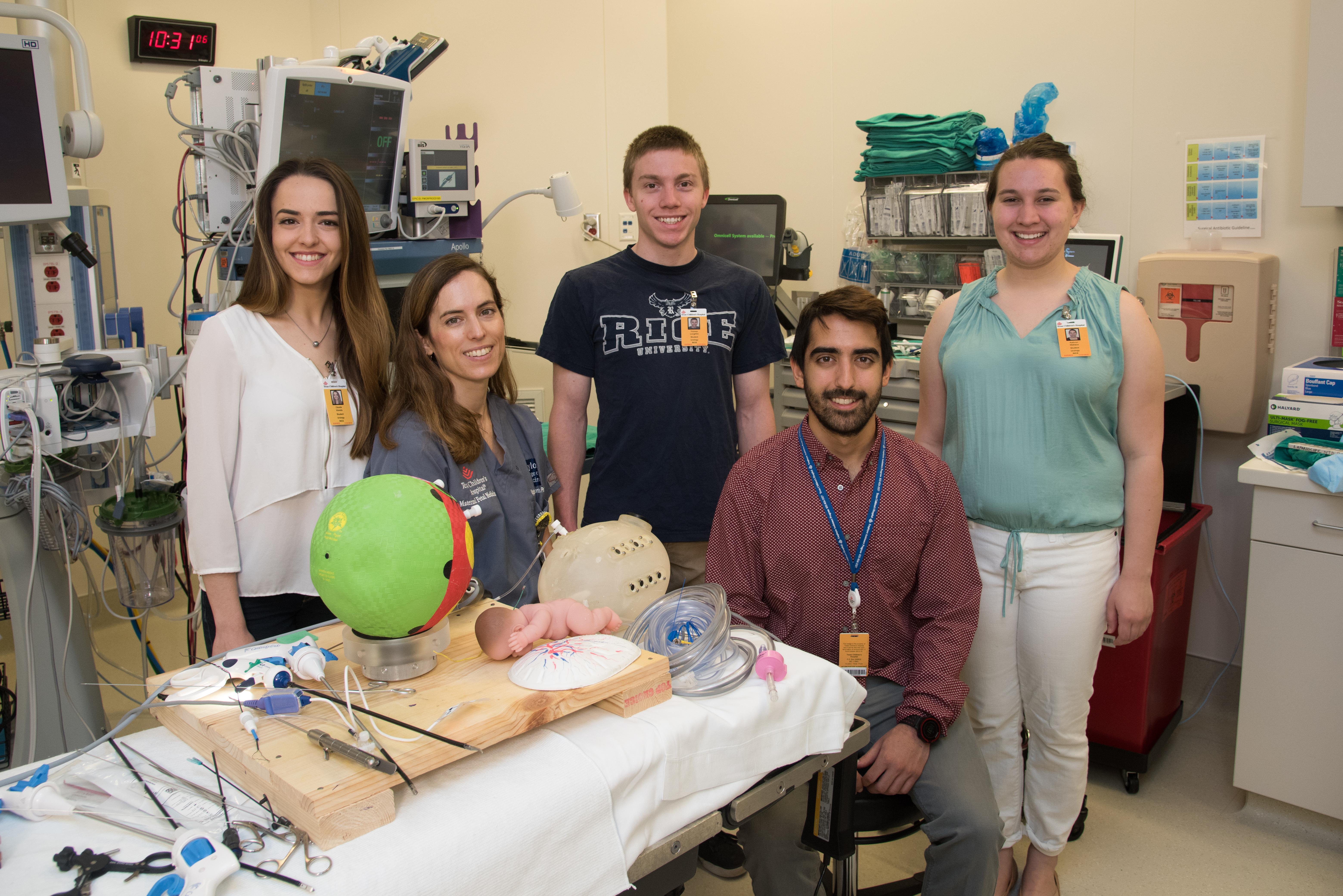 To build the prototype, the bioengineering students, Claudia Iriondo, Thomas Loughlin, Samir Saidi and Kathryn Wallace, worked closely with Dr. Magdalena Sanz Cortes, an associate professor of obstetrics and gynecology at Baylor College of Medicine and a clinician at the Texas Children’s Pavilion for Women, as well as their Rice faculty adviser, engineering lecturer Eric Richardson. It is the product of their capstone design project, required of most senior engineering students at Rice.

A few weeks after winning the top Willy Revolution Award, a $5,000 prize presented at Rice’s annual Engineering Design Showcase for innovation in design, and days before commencement, the team spent a morning in a device-testing suite at the Pavilion for Women to watch their prototype in action. 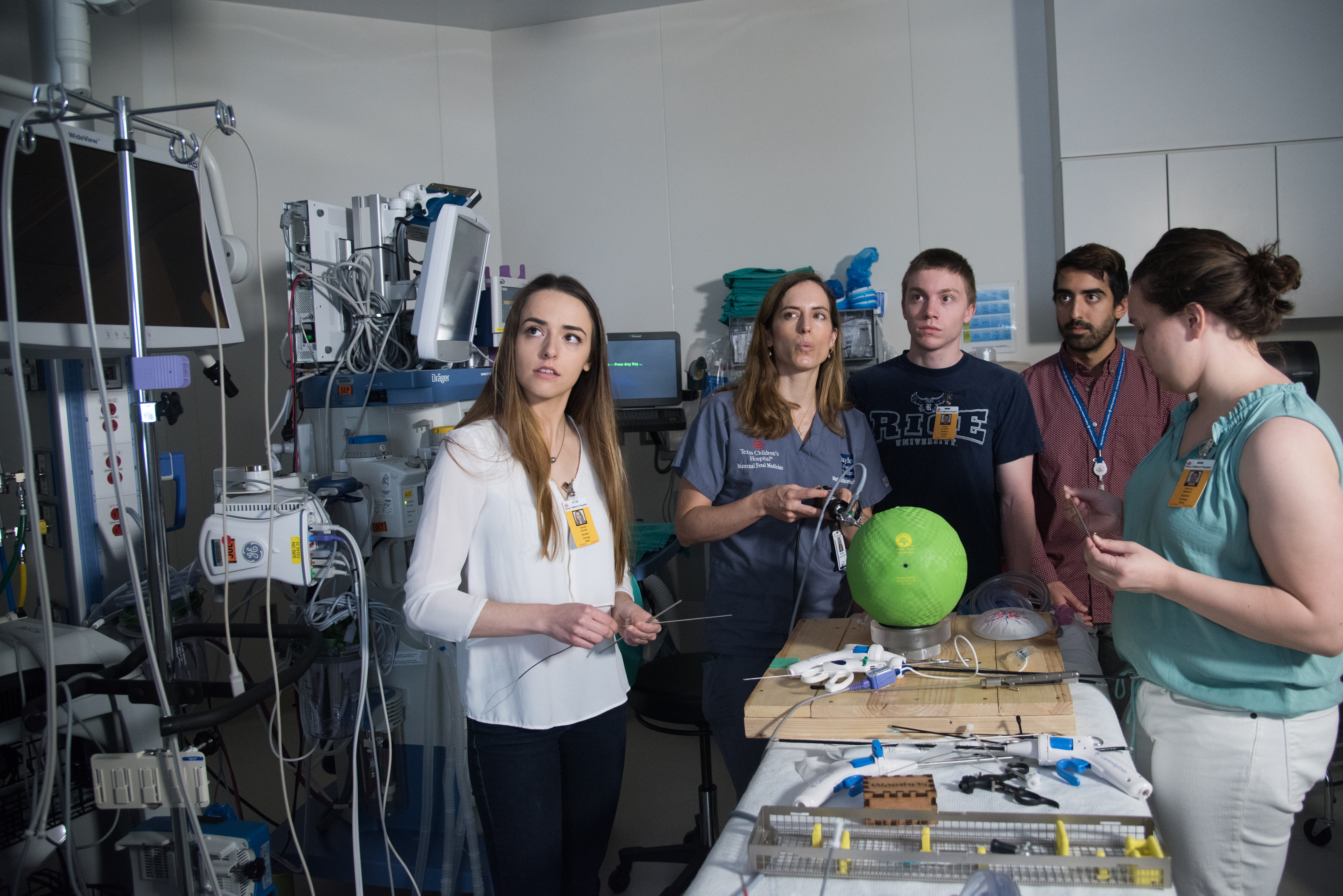 “The other challenging part was the mechanics, how to design something that is safe enough for the baby and can be compatible with our surgeries. It’s not a trivial matter, and they did a great job,” she said.

At first glance, the device is a loop of wire on a hollow stick. But a closer look reveals that the wire is a special hybrid that expands to a predetermined shape at the correct temperature. It carries LEDs and a photodetector on miniature circuit boards that illuminate and sense the flow of blood through the tissue underneath.

The loop is packaged in a retractable sheath that fits through the small incision made in fetoscopic surgeries. The WombOx device is used like all other endoscopic tools, with a miniature camera. The idea is to insert the tube into the mother’s womb and extend the loop. Once it expands, doctors use the video feed to guide the loop around a limb and gently tighten it, putting the sensors in place to monitor the fetus throughout the surgical procedure. 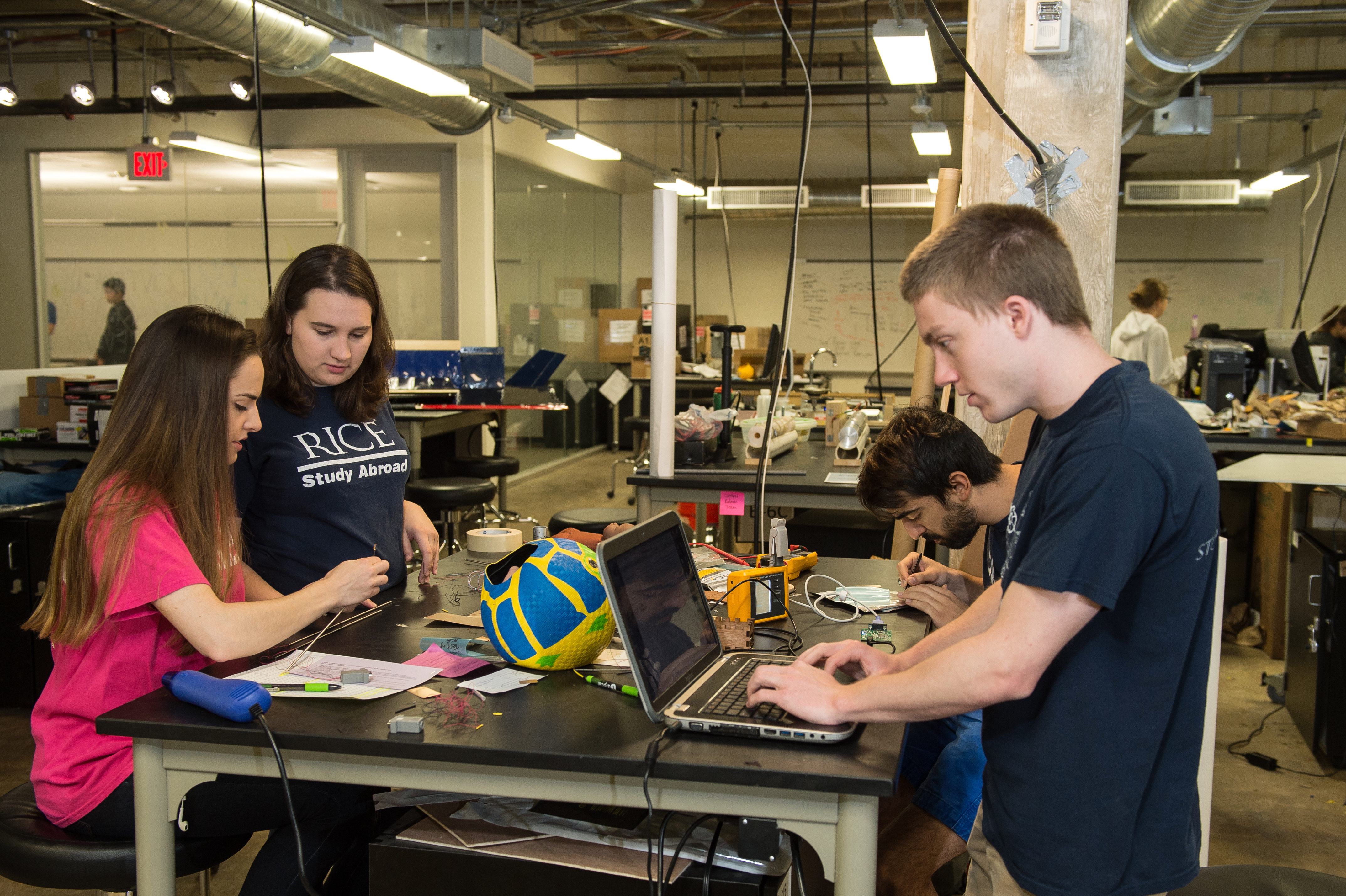 Rice University bioengineering students work at the Oshman Engineering Design Kitchen on their prototype of a pulse oximeter intended to monitor the vital signs of fetuses during endoscopic surgery. From left: Claudia Iriondo, Kathryn Wallace, Samir Saidi and Thomas Loughlin.

“Our design, like other endoscopic tools, is intended for single use,” Iriondo explained. ‘The device is durable enough to withstand unsheathing, expansion in the womb, attachment to the fetus and resheathing during removal.”

“We took the same components found in the finger clip and basically mounted them onto flexible circuit boards we printed here,” Loughlin said. “There are two LEDs, a red and an infrared, mounted on one side, and on the other side there’s a photodetector that will detect how much light is passing through, which is related to the absorbance properties of the blood. That’s related to how oxygenated the blood is.

“We turn the signal from the photodetector into a voltage that can be read, processed and turned into a number for oxygen saturation of the blood,” he said.

At the Oshman Engineering Design Kitchen, the team tested their device on a baby doll in a ball, modeled after a similar unit in the Texas Children’s facility. The hospital’s more sophisticated version allowed them to insert a rudimentary WombOx through a port that models an incision and successfully loop it around the arm of the doll within, following their progress on a monitor. 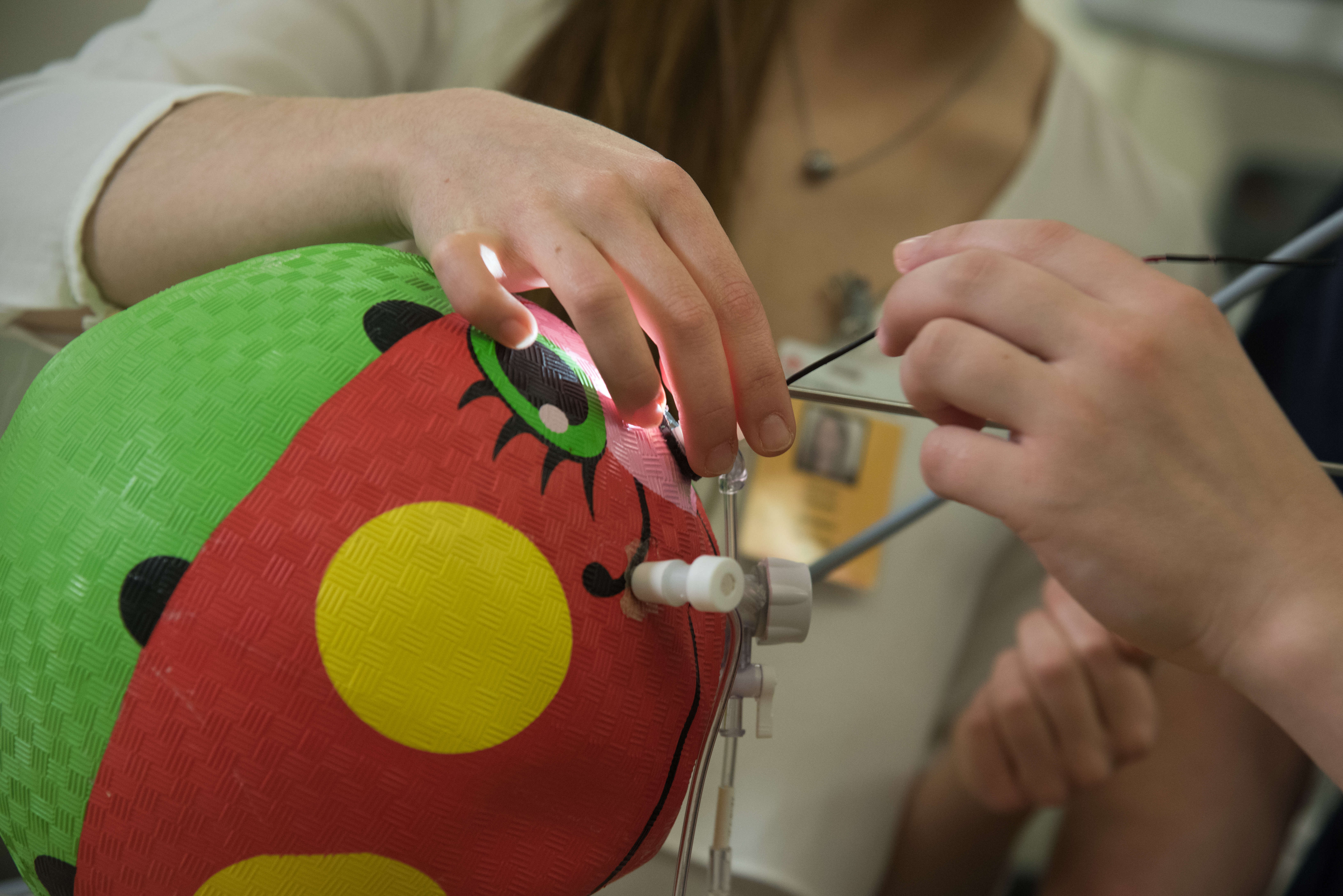 The WombOx prototype built by engineering students at Rice University miniaturizes the electronics of a pulse oximeter device to enable monitoring the vital signs of a fetus during endoscopic surgery. Techniques for these surgeries are being developed by Texas Children’s Hospital.

The focus of their project was to get the electronics right, miniaturizing the components of a pulse oximeter to fit inside a tube only a few millimeters wide. What made it possible was having a loop made of nitinol, a flexible wire of nickel and titanium that can be formed into a specific shape. It collapses within the tube and returns to its intended shape when exposed to body temperature.

The team designed a sine wave-like section into the loop to give surgeons a visual reference. If the sine disappears, the loop is too tight.

The device will now go to engineers at Texas Children’s for further refinement and validation, Wallace said.

“A lot of doctors have encouraged us and said, ‘This is amazing, I’m glad you guys are doing this.’ No one is taking it up because there’s not a huge return on investment, but this will be amazing if it can actually monitor a fetus’s vital signs and intervene if something goes wrong,” she said.