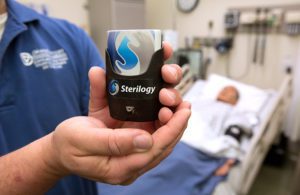 A group of college students has developed a series of devices for a Michigan-based company that addresses a common problem for healthcare workers: keeping hands sanitized and clean.

The students from Grand Valley State University’s applied Medical Device Institute (aMDI) worked with Sterilogy (Bloomfield Hills, Mich.) to develop the hand hygiene compliance system with a goal to reduce hospital infections. The three-device system was designed for nurses, doctors and other healthcare workers who come in direct contact with patients.

“Every day, about 250 people across the country die from hospital infections, and over half of infections are caused by direct contact,” said Sterilogy president Hal Zaima in a prepared statement. “It results in more than $30 billion in unnecessary costs to hospitals.”

The students based their system on an idea from Sterilogy co-founder Bradley Ahlgren, an orthopedic surgeon who found wall-mounted sanitizers inconvenient and often empty. Ahlgren started carrying around canisters of sanitizers in his scrubs.

Zaima enlisted the help of aMDI in spring 2017 to design, build and test a series of prototypes for the hand hygiene system, which includes three separate devices. The personal sanitizer unit (PSU) is a body-worn device that dispenses the foam sanitizer; the zone alert emitter unit is attached to a patient’s bed and communicates with the PSU to remind healthcare workers to sanitize; and the base station unit is placed at a central location, like a nurse’s station, and uploads data from PSUs when they are in close range.

Jonathon Vinsko, a computer engineering graduate assistant, said it was a valuable experience to be able to take Sterilogy’s concept and build it from the ground up.

“All three devices work together to ensure that healthcare workers are complying with health standards,” Vinsko said. “When a nurse or doctor walks up to a new patient or away from a patient, they are required to sterilize their hands. Sometimes people forget, so this system serves as a quick reminder.”

“If there are multiple patients in a room, it’s more convenient to have a portable sanitizing unit at the ‘point of care,’ rather than having to run back and forth to one mounted on a wall or to a sink,” he said.

Zaima said several hospitals in the Detroit area are interested in beta testing the new system, which has five patents granted and one patent pending. He said Sterilogy will continue to work with aMDI to fine-tune the current design in preparation for beta testing and mass production.