Bioelectronics, sometimes called the next medical frontier, is a research field that combines electronics and biology to develop miniaturized implantable devices capable of altering and controlling electrical signals in the human body. Large corporations are increasingly interested: a joint venture in the field has recently been announced by Alphabet, Google’s parent company, and pharmaceutical giant GlaxoSmithKline (GSK).

One of the challenges that scientists face in developing bioelectronic devices is identifying and finding ways to use materials that conduct not only electrons but also ions, as most communication and other processes in the human organism use ionic biosignals (e.g., neurotransmitters). In addition, the materials must be biocompatible.

Resolving this challenge is one of the motivations for researchers at São Paulo State University’s School of Sciences (FC-UNESP) at Bauru in Brazil. They have succeeded in developing a novel route to more rapidly synthesize and to enable the use of melanin, a polymeric compound that pigments the skin, eyes and hair of mammals and is considered one of the most promising materials for use in miniaturized implantable devices such as biosensors. 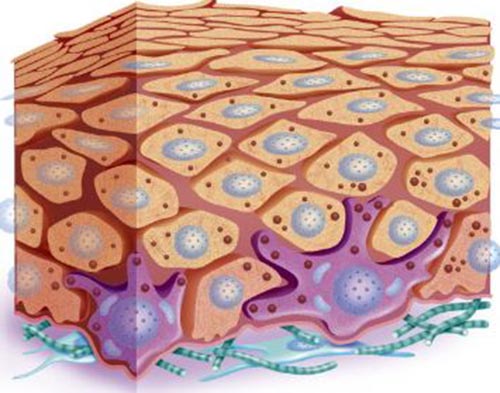 “All the materials that have been tested to date for applications in bioelectronics are entirely synthetic,” said Carlos Frederico de Oliveira Graeff, a professor at UNESP Bauru and principal investigator for the project.

“One of the great advantages of melanin is that it’s a totally natural compound and biocompatible with the human body: hence its potential use in electronic devices that interface with brain neurons, for example.”

According to Graeff, the challenges of using melanin as a material for the development of bioelectronic devices include the fact that like other carbon-based materials, such as graphene, melanin is not easily dispersible in an aqueous medium, a characteristic that hinders its application in thin-film production.

Furthermore, the conventional process for synthesizing melanin is complex: several steps are hard to control, it can last up to 56 days, and it can result in disorderly structures.

In a series of studies performed in recent years at the Center for Research and Development of Functional Materials (CDFM), where Graeff is a leading researcher and which is one of the Research, Innovation and Dissemination Centers (RIDCs) funded by FAPESP, he and his collaborators managed to obtain biosynthetic melanin with good dispersion in water and a strong resemblance to natural melanin using a novel synthesis route.

The process developed by the group at CDMF takes only a few hours and is based on changes in parameters such as temperature and the application of oxygen pressure to promote oxidation of the material.

By applying oxygen pressure, the researchers were able to increase the density of carboxyl groups, which are organic functional groups consisting of a carbon atom double bonded to an oxygen atom and single bonded to a hydroxyl group (oxygen + hydrogen). This enhances solubility and facilitates the suspension of biosynthetic melanin in water.

“The production of thin films of melanin with high homogeneity and quality is made far easier by these characteristics,” Graeff said.

By increasing the density of carboxyl groups, the researchers were also able to make biosynthetic melanin more similar to the biological compound.

In living organisms, an enzyme that participates in the synthesis of melanin facilitates the production of carboxylic acids. The new melanin synthesis route enabled the researchers to mimic the role of this enzyme chemically while increasing carboxyl group density.

“We’ve succeeded in obtaining a material that’s very close to biological melanin by chemical synthesis and in producing high-quality film for use in bioelectronic devices,” Graeff said.

Through collaboration with colleagues at research institutions in Canada, the Brazilian researchers have begun using the material in a series of applications, including electrical contacts, pH sensors and photovoltaic cells.

More recently, they have embarked on an attempt to develop a transistor, a semiconductor device used to amplify or switch electronic signals and electrical power.

“Above all, we aim to produce transistors precisely in order to enhance this coupling of electronics with biological systems,” Graeff said.