A Yale scientist collaborated with researchers at Duke University and surgeons in Poland and the United States to create bioengineered blood vessels for kidney-disease patients on dialysis. The man-made vessels appeared to be both safe and more durable than commonly used synthetic versions, said the investigators.

Their study findings — which set the stage for further investigation in randomized controlled trials — were published May 12 in The Lancet. 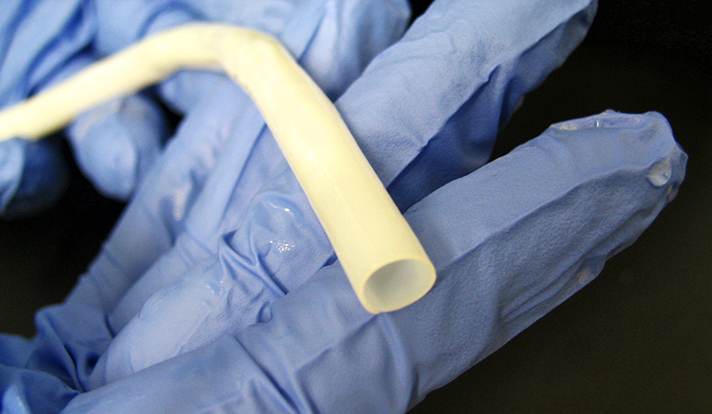 Bioengineered blood vessels may prove to be safer and last longer than synthetic vessels for patients on dialysis. (Courtesy of Humacyte)

Individuals with kidney failure require dialysis, which is often administered through a synthetic graft implanted in the arm. However, those grafts are prone to infection, clotting, and other complications. Studies of alternative grafts — derived from the patient, a donor, or animal tissue — have found they perform no better than synthetics.

Laura Niklason, M.D., the Nicholas Greene Professor of Anesthesiology and of biomedical engineering at Yale, and her co-authors created novel bioengineered vessels to provide dialysis access to 60 patients at six research sites. Known as human acellular vessels (HAVs), they were produced by Humacyte, Inc., a company that Niklason co-founded.

To create the vessels, the researchers first isolated vascular cells from human donors and grew them in tissue culture. They then placed the cells on a degradable scaffold shaped like a blood vessel. As the tissue grew, it was bathed in nutrients and stretched to acquire the physical properties of real blood vessels.

“After that process, which takes eight weeks, the scaffold degrades and what we have left is engineered tissue that we have grown from scratch,” said Niklason.

The final step was to wash away the cellular components with a special solution, leaving behind a protein structure that the cells made during culture. This protein structure is mostly collagen, along with other non-living components. This “decellularized” tissue retains the structure of the vessel but none of the components that would cause tissue rejection.

“The bioengineered blood vessel represents a critical step in tissue engineering,” said Jeffrey Lawson, M.D., professor of surgery and pathology at Duke, chief medical officer of Humacyte, and a long-time collaborator with Niklason. “Because these vessels contain no living cells, patients have access to off-the-shelf engineered vessels that can be used without any waiting period associated with tailor-made products.”

One year after implantation, the bioengineered vessels appeared to be both safe and functional. “They are safe and maintain their mechanical integrity,” said Niklason. They also showed no sign of rejection.

While there were cases of adverse events such as clotting, the rates of those events were comparable to alternatives. Notably, the durability of the bioengineered vessels at one year was 90% compared to the historically observed 60% rate of synthetic grafts.

Additionally, the researchers noted that after implantation, the bioengineered vessels had been repopulated with the patient’s own cells. “We’re taking a nonliving tissue, and it becomes living over time,” said Niklason. “This is regenerative medicine in the truest sense.”

Because many vessels could be developed from a single donor, the findings, if confirmed, could transform care for patients with kidney failure and other diseases, said Niklason. “The fact that acellular tissue becomes human tissue has implications for regenerative medicine more broadly.”