Patients with pancreatic cancer that hadn’t spread lived substantially longer on a four-drug combo than on a single standard cancer drug, a rare advance for a tough-to-treat disease, researchers reported Monday.

The results indicate the powerful chemotherapy treatment known as folfirinox will likely become standard of care for the minority of patients whose pancreatic cancer is diagnosed early enough to be removed by surgery, experts not involved in the study said.

After an average three years of follow-up, almost 40 percent of the folfirinox patients were disease-free compared with about 20 percent who had the standard drug, Gemzar. Overall, almost two-thirds of folfirinox patients were still alive compared with almost half of Gemzar patients, unexpectedly good results, said Dr. Thierry Conroy, the lead author and a cancer specialist at the Cancer Institute of Lorraine in Vandoeuvre-les-Nancy, France.

Results were presented Monday at an American Society of Clinical Oncology conference in Chicago. 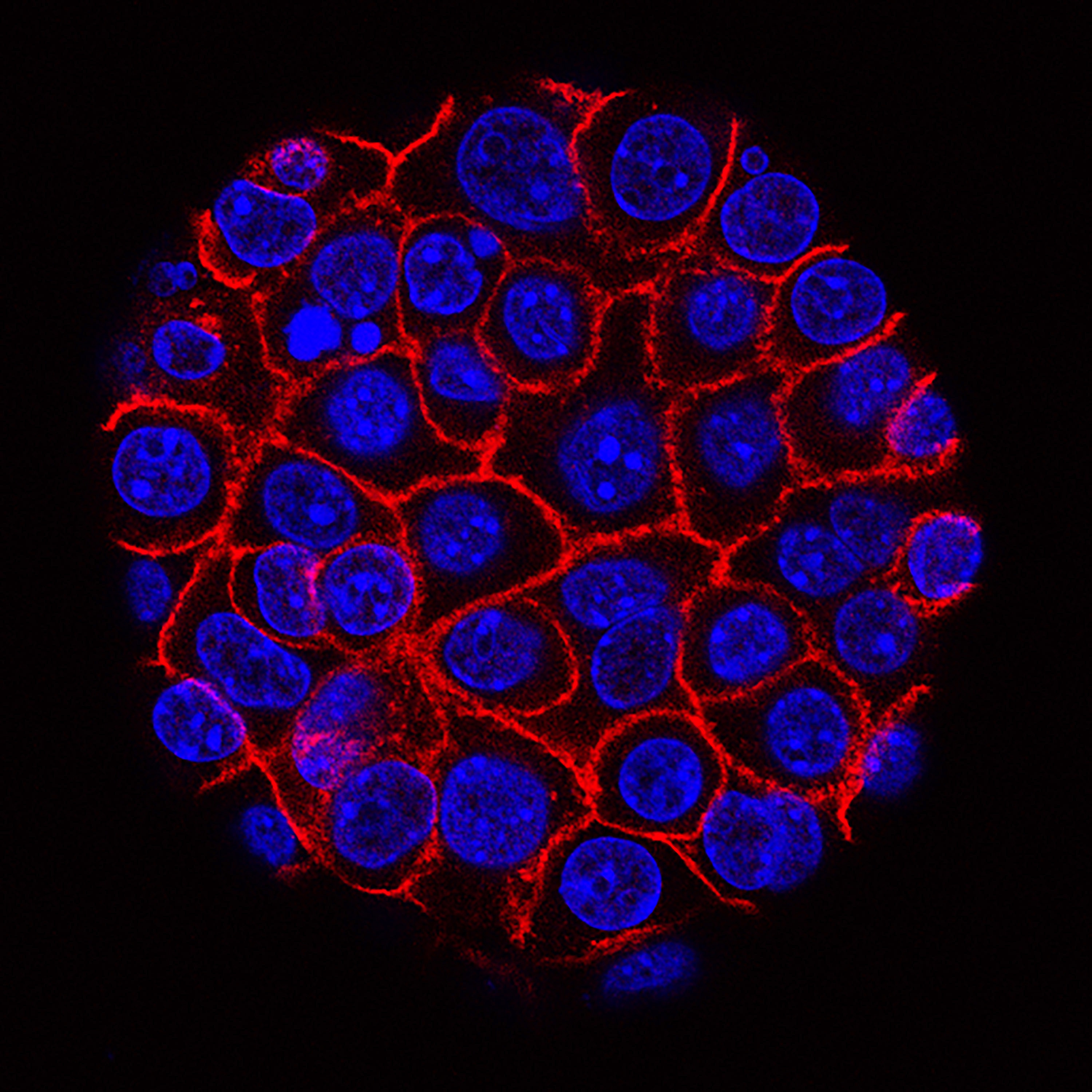 This undated microscope image from USC via the NIH shows pancreatic cancer cells, nuclei in blue, growing as a sphere encased in membranes, red. In a rare triumph for tough-to-beat pancreatic cancer, patients who had surgery lived substantially longer on a four-drug combo than on a standard cancer drug, according to research released on Monday, June 4, 2018. (Min Yu/Eli and Edythe Broad Center for Regenerative Medicine and Stem Cell Research at USC, USC Norris Comprehensive Cancer Center)

Folfirinox is already standard treatment for patients whose pancreatic cancer has spread.

The outlook has been bleak for patients with pancreatic cancer , an uncommon disease for which there is no screening. Symptoms including fatigue, weight loss and abdomen pain often don’t occur until late, after the disease has spread.

About 330,000 cases are diagnosed each year worldwide, including about 55,000 in the United States. About half are diagnosed after the disease has spread; most die within a year of diagnosis and only about 6 percent survive for five years.

About 15 percent of patients are candidates for surgery; generally their disease was detected early and has not spread widely beyond the pancreas.

The new results are “reassuring for a disease where unfortunately on average people only live several months rather than several years. This is a new standard of care for this illness,” said Dr. Andrew Epstein, an expert at Memorial Sloan Kettering Cancer Center in New York.

Nearly 500 patients at 77 centers in France and Canada were enrolled in the study from spring 2012 through fall 2016. They either received the four-drug combo through an IV every two weeks for about six months or Gemzar three times a month for six months. The study was funded by philanthropic groups in France and Canada.

Participants had early ductal tumors, the most common kind of pancreatic cancer.

Side effects are common for both drugs including low blood counts, fatigue and diarrhea, and they occurred more often in folfirinox patients. There was one death in the study in the Gemzar group.

Folfirinox and Gemzar are available as generics. Schilsky said both treatments are “pretty inexpensive” since the drugs are available as generics. Insurance typically covers both for metastatic cancer and gemcitabine for operable cancer, and it’s likely it would cover folfirinox for operable cancer if guidelines are revised and it becomes standard of care, which several experts say is expected.