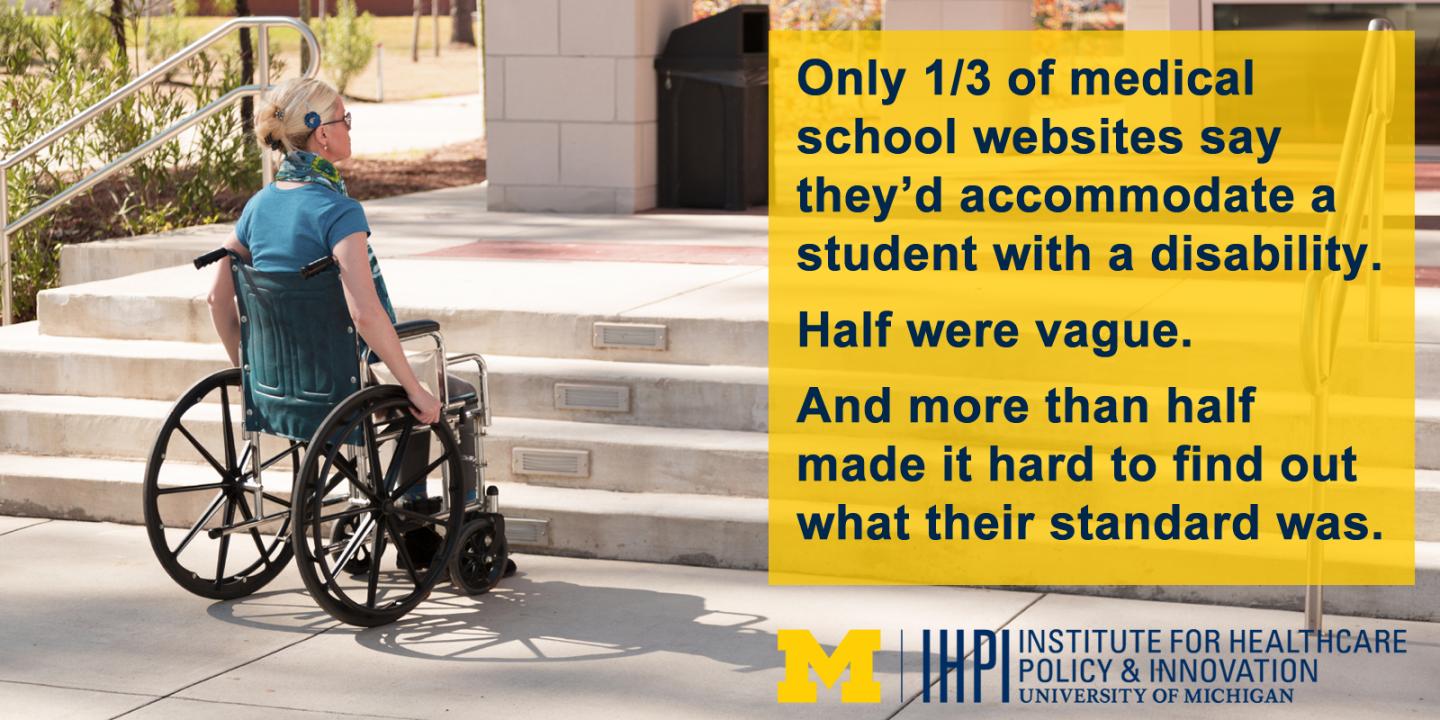 They may dream of becoming doctors, and helping people like themselves. But for young people with disabilities, that dream may die when they check the admissions standards of most medical schools, according to a new study. Even if the schools would actually consider their application, and offer them assistance as required by the Americans with Disabilities Act, they wouldn’t know that from looking at many schools’ websites, the researchers find.

Only a third of schools said outright that they would accommodate a student with a disability who otherwise qualified to attend. Another half had vague information about who they would accept. And finding information for prospective students with disabilities was hard on 42 percent of medical school websites, and impossible on 16 percent of sites. Even when the researchers posed as prospective students and asked for information, 12 schools did not respond.

Medical schools that offer a doctor of osteopathy (D.O.) degree fared better than those offering a medical doctor (M.D.) degree. But even D.O. schools had issues.

In general, the authors write, the findings suggest a “concerning state of affairs as we celebrate the ADA’s 25th anniversary.” They call on schools and professional societies to reexamine how prospective medical students with disabilities are treated.

Zazove, who is deaf and uses a cochlear implant, mentors U-M medical students and residents who have disabilities. He notes that national leaders and other researchers in academic medicine have supported the concept of including people with disabilities in the pool of those training to become physicians.

The first-of-its-kind study suggests that most medical schools need to post, update or clarify what are known as technical standards, or TSs. Required under the ADA, TSs spell out what a school will do to accommodate a student with a disability. This can include allowing them to use technologies that help them overcome limitations created by their disability. For instance, schools might allow an amplified stethoscope for someone with a hearing limitation, or a motorized scooter or wheelchair for a student who can’t walk easily or at all.

Each school writes its own TSs, and typically makes it available on its website. But no study had ever looked at how easy they are to find, and how the details square with the ADA and the current state of assistive technology. Under the ADA and the Rehabilitation Act, medical schools are barred from discriminating against people with disabilities, if they are otherwise qualified for admission. If they accept federal funds, for instance for research, schools must make reasonable efforts to accommodate qualified disabled applicants.

Says Michael D. Fetters, M.D., MPH, M.A., senior author of the study and a professor of family medicine, “This study shows there’s explicit language in the written policies on medical school websites that is not in compliance with the ADA.

“In this day and age when public institutions are expected to conform with the law, this is almost unimaginable,” Fetters adds. “If you’re an applicant who’s online, and it says you’re not welcome, you’re going to accept that and never get out of the gate. Even if the school would be willing to accommodate you if you apply and qualify, the explicit language is at least a serious deterrent.”

The researchers found that 53 schools — one-third of those studied — had TSs that specifically supported accommodating students with disabilities. But 79 did not clearly state policies on this matter, siz were unsupportive, and 23 provided no information. More than 60 percent of the schools did not specify whether the school or the student would be responsible for providing technologies or other accommodations. Just over a quarter said the school would provide these.

About 40 percent of schools said they would allow auxiliary aids, such as motorized scooters. But less than 10 percent allowed students to use intermediaries, such as sign language interpreters.

In addition to Zazove, the U-M Medical School has another department chair and other faculty with disabilities, and several current medical students have disabilities and are being accommodated. However, says Joseph Kolars, M.D., senior associate dean for education and global initiatives, the school is always looking to do more, and is currently revising its TSs. “We welcome the attention our colleagues have brought to an important issue that deserves more attention,” he says. “Like most medical schools, we recognize opportunities for ours to do even better in regard to better articulating our values and making sure all of our communications are in alignment. This will make a good school even better and hopefully others will recognize similar opportunities as well.”