Researchers at Children’s Hospital Los Angeles (CHLA) have conducted the first study of its kind, using proton magnetic resonance spectroscopy (MRS) to look at brain regions in both adults and children who stutter.

Consistent with past functional MRI studies, their findings demonstrate neuro-metabolite alterations across the brain – linking stuttering to changes in brain circuits that control speech production and circuits that support attention and emotion. The study in now published online in the Journal of the American Medical Association (JAMA).

The research was led by Bradley S. Peterson, MD, Director of the Institute for the Developing Mind at CHLA, and Professor and Director of the Division of Child and Adolescent Psychiatry at the Keck School of Medicine of the University of Southern California. 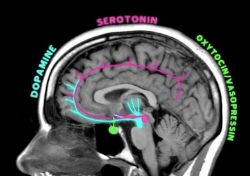 Developmental stuttering is a neuropsychiatric condition; its origins in the brain are only partly known. In order to measure an index of neural density related to stuttering in circuits and brain regions suspected to be affected, the scientists performed proton shift imaging of the brain in 47 children and 47 adults. The study included subjects both with and without stuttering.

The research team found that affected brain regions included major nodes of the so-called Bohland speech-production network (associated with the regulation of motor activity); the default-mode network, (involved in the regulation of attention); and the emotional-memory network (responsible for regulating emotion.)

“That stuttering is related to speech and language-based brain circuits seems clear,” says Peterson. “Attention-regulating portions of the brain are related to control circuits that are important in governing behavior. People with changes here are more likely to stutter and have more severe stuttering. And emotions like anxiety and stress also tend to make stuttering worse, likely because this network interacts with language and attention control circuits.”