A new ultra-high resolution “nanoscope” is capable of taking 3-D images of an entire cell and its cellular constituents in unprecedented detail, an advance that could reveal biological phenomena never before seen and bring new medical insights.The work was carried out by researchers at Yale University, Purdue University, the University of Cambridge, the Jackson Laboratory, Howard Hughes Medical Institute and the University of Oxford. 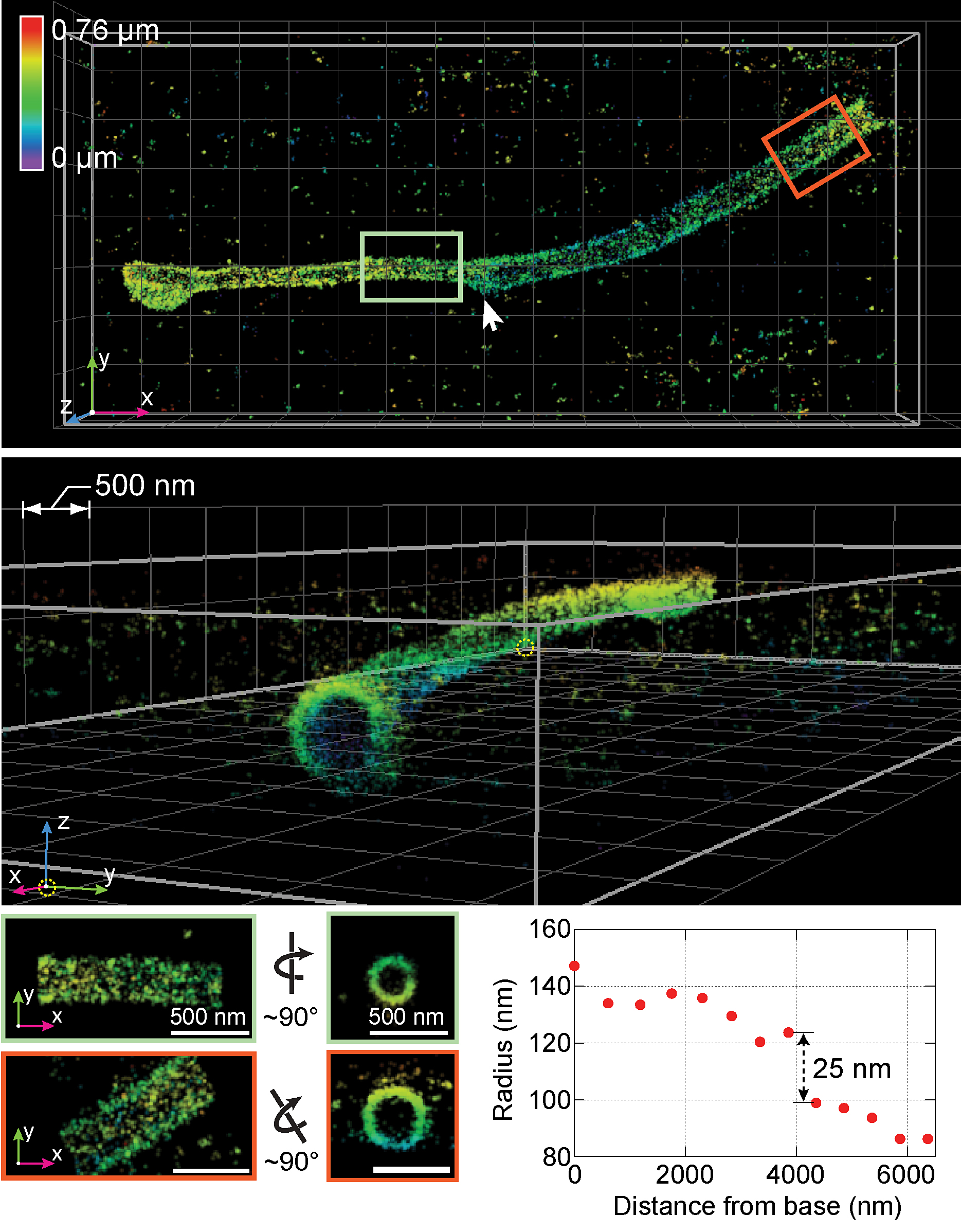 Using a new 3-D super-resolution instrument, researchers captured this visualization of a “primary cilium,” the antenna of the cell. (Photo courtesy of Huang et al./Cell)

Super-resolution fluorescence microscopy earned its developers the 2014 Nobel Prize in chemistry and has become an important tool in cell biology research. Its use, however, has been limited because of challenges in resolving features deep below the surface of samples. Researchers have now solved that problem with the development of the new system, called whole-cell 4Pi single-molecule switching nanoscopy (W-4PiSMSN), said Fang Huang, an assistant professor of biomedical engineering at Purdue.

Findings are detailed in a research paper appearing Thursday (Aug. 11) in the journal Cell. The paper’s co-lead authors are Huang and Yale postdoctoral research associate George Sirinakis. The corresponding author is Joerg Bewersdorf, a Yale associate professor of cell biology and biomedical engineering.

The technology was demonstrated by imaging cellular components, including synaptonemal complexes, which link chromosomes together; mitochondria and the endoplasmic reticulum, which are critical for cellular functions; the cilia, which protrude from cells like tiny antennas; and bacteriophages, which are viruses about 50 nanometers in diameter that infect bacteria.

The new system advances the original super-resolution fluorescence microscopy by incorporating the deformable mirrors into a microscope using two objectives, one above and one below the sample, and introducing a set of new algorithms to pinpoint molecular positions of proteins deep inside cells. The system allows researchers to resolve details far smaller than the wavelength of light, representing a powerful and versatile new laboratory tool, Huang said. “The wave nature of light restricts the resolution of conventional light microscopy to about 200 nanometers, making details of subcellular structures and protein assemblies unresolvable,” Huang said.

The new system, however, allows imaging of cellular constituents in 3-D at 10- to 20-nanometer resolution throughout entire mammalian cells, powerful enough to reconstruct the fine features of viruses. Until now, resolving such fine details was only possible using electron microscopy, which requires samples to be treated, killing the cells. “One goal is to further push the envelope in the direction of live-cell and tissue imaging, two major roadblocks of modern super-resolution techniques,” Huang said, “and therefore allow visualization of cellular functions live in their physiological conditions at the nanoscale.”

Molecules inside cells and in structures called organelles can be tagged with either “photo-switchable” fluorescent proteins or organic dyes that are able to glow when exposed to a small amount of ultraviolet light. “These special fluorescent tags (fluorophores) have two states, on and off,” Huang said. “And you can control the on and off states by shining light on these molecules. The concept of single molecule switching nanoscopy is to stochastically switch molecules on and off at different time frames, pinpoint the exact locations of single molecules and reconstruct the cellular constituents at super resolution.”

The super-resolved images are reconstructed from the positions of thousands to millions of single molecules. “We are interested in using our developments to study the cytokinetic apparatus, a core machinery during cell division,” Huang Said.