Stratasys (Nasdaq: SSYS), a global leader in additive technology solutions, today announced that surgeons at Guy’s and St Thomas’ NHS Foundation Trust, London, are using 3D printing technology to improve the success rates of life-saving, complex organ transplantation in young children. This is exemplified in the case of two-year-old Dexter Clark, who recently received a larger-than-average kidney from his father, Brendan Clark. 3D printing played an important role in the operation, according to Mr. Pankaj Chandak, Transplant Registrar at Guy’s and St Thomas’ NHS Foundation Trust.

Guy’s and St Thomas’ NHS Foundation Trust is one of the largest NHS trusts in the U.K., treating more than 2.4 million patients in acute and specialist hospital services and community services every year. Surgeons across the Trust are using Stratasys multi-material 3D printing for planning the most intricate of operations, with the transplant department a pioneer in the use of the technology. Most notably, it is the first Trust in the world to use 3D printed models to pre-plan the successful transplantation of an adult kidney into a small child with anatomical complexities.

In the case of Dexter, it was clear that he would require a kidney transplant before he was even born, with his father as the likely donor. Due to the complications of his illness, Dexter was able to eat only through a feeding tube and unable to enjoy a simple meal time with his parents and three brothers. In order to perform the required transplant, this case presented two distinct challenges for the surgical team. Firstly, Dexter weighed less than 10 kg, significantly increasing the risk. Secondly, his father’s kidney was much larger than that of the average adult male – raising questions as to the potential feasibility and safety of implanting the donor kidney into Dexter’s abdomen.

Typically, conventional medical imaging is used in the pre-surgical planning process for surgeries such as this one, however these often have limitations. As such, the surgeons used a precision, multi-material Stratasys 3D printer, purchased from U.K. Partner, Tri Tech 3D, to produce two intricate, patient-specific models for pre-surgical preparations.

“Using our 3D printer, we worked in collaboration with Nick Byrne and his team – clinical scientists from our medical physics department who specialize in medical imaging. They converted patient CT scans into anatomically accurate, multi-material 3D models. These helped us appreciate aspects such as depth perception and space within the baby’s abdomen, which can often be difficult to ascertain when looking at conventional imaging,” explains Mr. Chandak. “The ability to print a 3D model of the patient’s anatomy in varying textures, with the intricacies of the blood vessels clearly visible within it, enables us to differentiate critical anatomical relations between structures. The flexible materials also allowed us to better mimic the flexibility of organs within the abdomen for simulation of the surgical environment.” 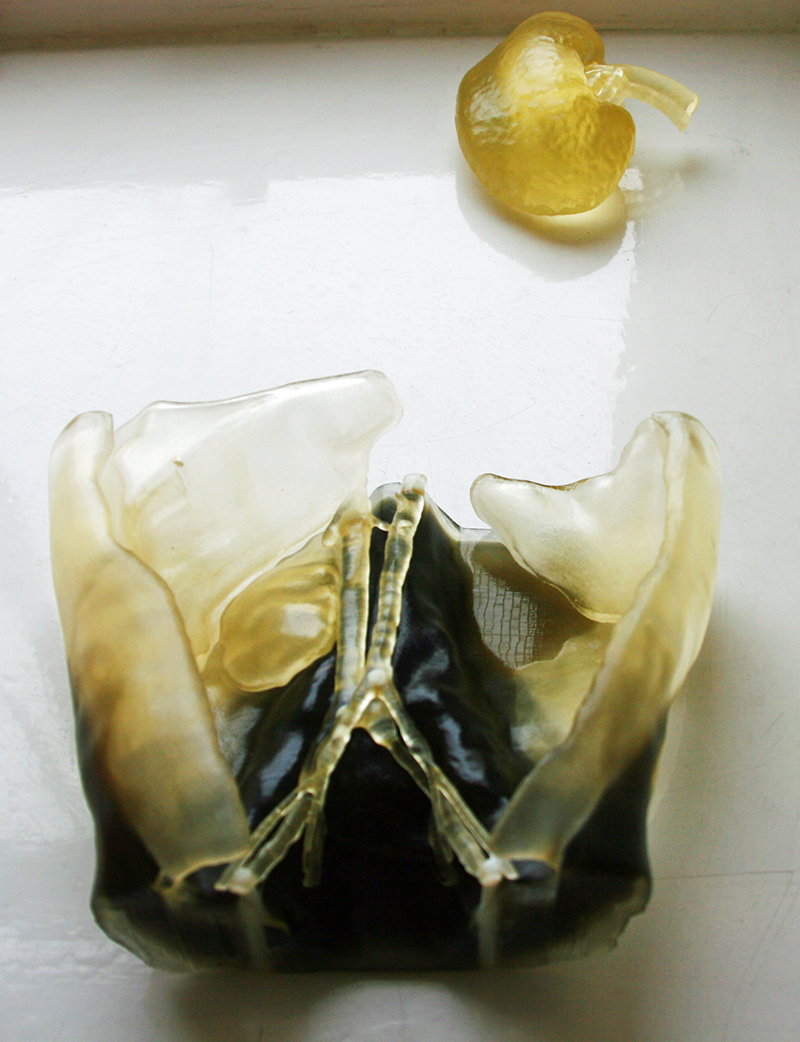 3D printed model of Dexter’s abdomen next to a 3D model of his father’s kidney, enabling surgeons to determine the feasibility of a transplant. Credit: Business Wire

Ordinarily, to reach a decision whether such complex transplants in children are viable, patients such as Dexter would normally have been placed under anaesthesia and the surgeon in some cases required to conduct an invasive surgical exploration to determine feasibility. With 3D printed models of the patient, the need for surgical exploration can be reduced, as the team can safely determine the optimal surgical approach in the pre-planning stages before the patient is on the operating table.

In Dexter’s case, the 3D printed models were also taken into the operating theatre on the day of the transplant and reviewed by Mr. Nicos Kessaris (Consultant Transplant Surgeon at Guy’s and St Thomas’ NHS Foundation Trust). Mr. Kessaris was able to use the models during the operation to assess the best way in which the donor kidney would lie and fit into Dexter’s abdomen.

“This technology has the potential to really enhance and aid our decision-making process both during pre-surgical planning and in the operating room, and therefore can help in the safety of what is a very complex operation and improve our patient care,” says Mr. Chandak.

Emily Clark, Dexter’s mother, comments, “Since the transplant, Dexter is a changed boy, eating solid food for the very first time. We always knew the operation would be complicated but knowing that the surgeons had planned the surgery with 3D models that matched the exact anatomy of my husband’s kidney and son’s abdomen, was extremely reassuring. We hope that Dexter’s case will offer other suffering families similar reassurance that cutting-edge technology, such as 3D printing, can help surgeons better treat their loved ones.”

Michael Gaisford, Stratasys’ Director of Marketing for Stratasys Healthcare Solutions, concludes: “Guy’s and St Thomas’ NHS Foundation Trust is pushing the boundaries of what can be achieved with multi-material 3D printing within healthcare. It is a clear demonstration of the ability for 3D printing to enable physicians to better plan, practice and determine the optimal surgical approach. We are delighted to see Dexter has fully recovered and hope many other children can benefit from such forward-thinking applications of our technology.”