In most people’s eyes, Grace Kabelenga was not born in a state of grace. Since birth, she suffered from almost unimaginable facial deformities that affected nearly every aspect of her young life.But, Grace, now eight years old, was born at a good time; a time when highly skilled surgeons are teaming with medical and 3D technology companies to do what was impossible just a few years ago. Thanks to this confluence of skills and technologies, Grace is on the cusp of normalcy. 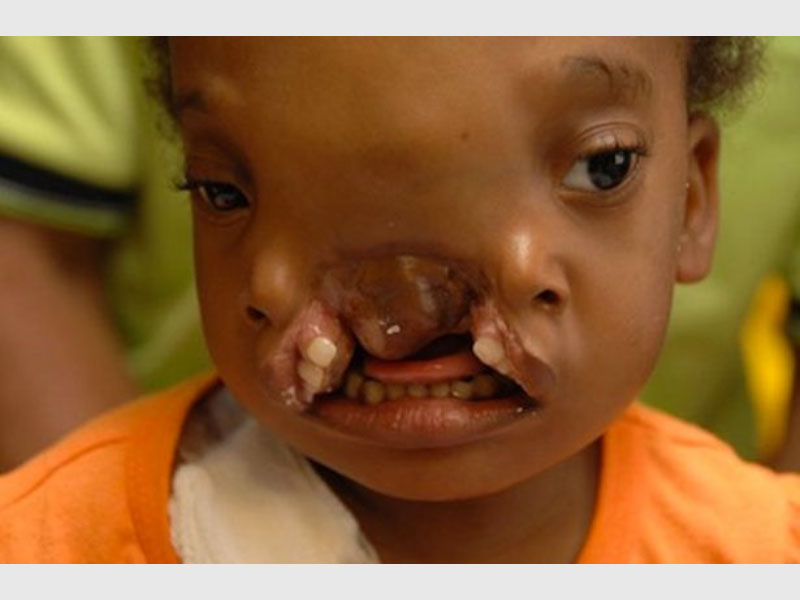 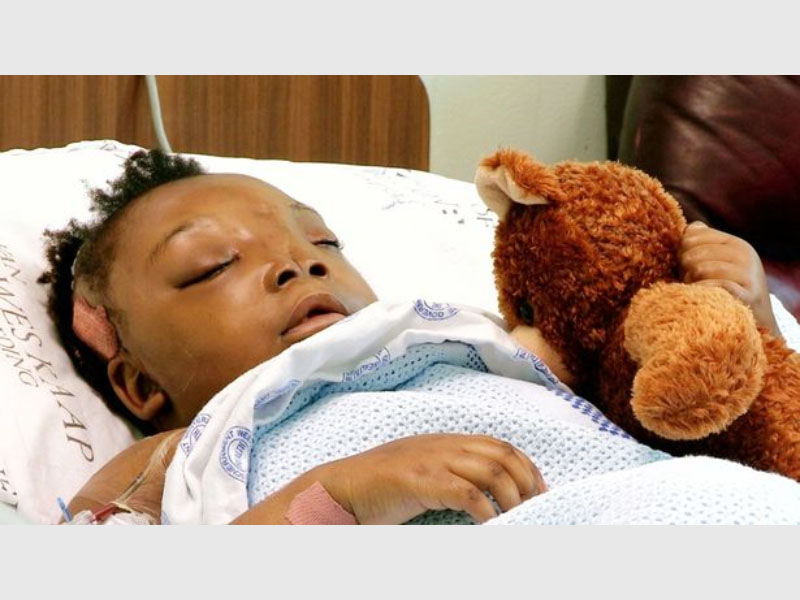 Grace was born in Ndola, Zambia. Her eyes were extremely wide apart, she had severe facial cleft deformities, and there was no bone separating her brain from her oral cavity. She had difficulty swallowing, resulting in her being undernourished and anemic.

She came to the attention of the World Craniofacial Foundation (WCF) and its founder and chair Dr. Kenneth Salyer, a world-renowned leader in craniofacial surgery, in late 2008. The World Craniofacial Foundation provides help, hope and healing for children with craniofacial abnormalities and their families.“Grace’s case was one of the most difficult ones in 40 years of extensive experience in treating and correcting craniofacial deformities in children and young adults,” says Dr. Salyer. Dr. Salyer deemed that Grace was too young for immediate surgery; her bones needed to grow stronger.

A surgery scheduled for November 2011 was postponed after determining that Grace was too malnourished. She underwent intravenous feeding and constant medical attention to improve her health.

Turning to a familiar ally

3D Systems provided the doctors with Virtual Surgical Planning (VSP®), a service in which engineers extract 3D anatomical information from a patient’s CT scans and develop a complete 3D simulation of the impending surgery. “The information that was provided by 3D Systems enabled virtual planning over the Internet by participants in various locations around the world,” says Dr. Salyer.

The 3D Systems VSP team also used 3D printing to produce models, guides and templates based on Grace’s unique anatomy. The 3D printed tools would be used during the operation to help with cutting and positioning her bones to match the virtual plan. 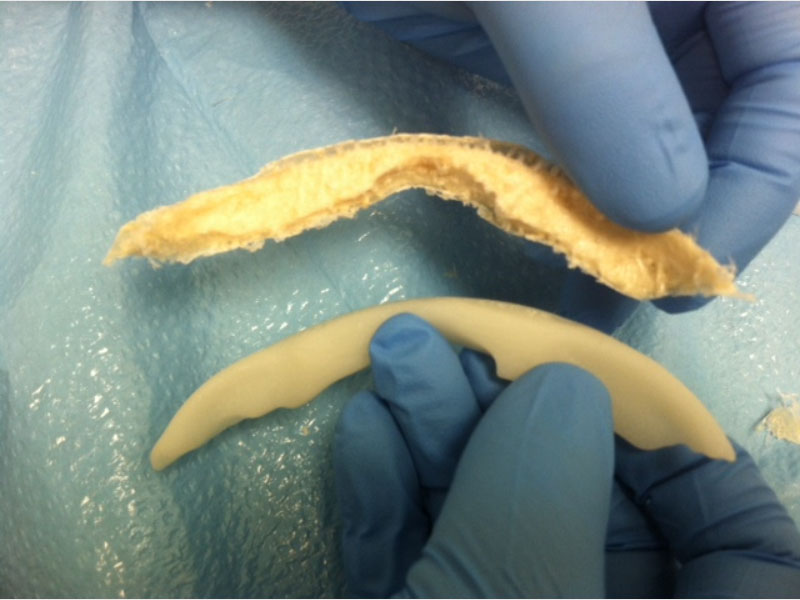 The VSP team uses 3D Systems ProX 800 and ProJet 7000 stereolithography (SLA) printers. The ProX 800 is known for its wide range of FDA-approved materials and outstanding surface smoothness, feature resolution, edge definition, and tolerances. The ProJet 7000 HD is ideal for dental applications, offering materials with tensile and impact strength that are resistant to high temperatures.

In the Mexico City operation, the mass of brain at the back of Grace’s mouth was completely dissected and placed back into a newly created cranial vault at the base of her skull. Her eyes were also moved closer together.“We were able to move the pieces of the entire anatomical puzzle into precise position only because of the guides created by 3D Systems from the 3D models,” says Dr. Salyer. “Without them, the precision required would be impossible.”

But there was still considerable work to be done: Grace had lost a large section of bone in her forehead and the tops of her eye sockets. Without that bone in place, there was just soft tissue covering her brain. If not corrected, she would need to wear a protective helmet for the rest of her life.

3D Systems worked with Dr. Salyer to identify and create the contour for Grace’s new forehead. 3D Systems Geomagic Freeform Plus, 3D sculpting software that works with a 3D Systems Touch X, a 3D haptic (force-feedback) device, was used to create the complex, organic curves for the forehead reconstruction. The intuitive software and haptic interface allowed the 3D Systems design team to make real-time changes to the design according to Dr. Salyer’s direction and without the need to produce physical parts or prototypes.

When the final contour was complete, digital files were sent to KLS Martin, which created a one-of-a-kind implant that would be absorbed into the body over time and provide the framework for a custom-fitted bone graft by Bacterin.

“Planning the surgery for Grace was particularly demanding,” says Shawn Burke, director of product development for KLS Martin North America. “Unlike many cases, Grace was missing a large volume of bone, making it a challenge to create a reconstruction that is strong enough but goes away and allows for the patient’s own bone to grow. The other challenge was the six teams from three continents that had to be able to see and interact with the 3D simulations in real-time. This was truly a multinational effort and solution coordinated by 3D Systems.”

When design of the implant was complete, 3D Systems provided Bacterin with 3D-printed molds for a custom-fitted “bandeau”—a piece of bone that defines the superior orbital rims above the eyes. A bone allograft (transplant) made of Bacterin’s 3Demin® material was shaped to Dr. Salyer’s custom specifications for Grace’s bandeau. Bacterin also provided 3Demin sheets, OsteoSponge® and OsteoWrap® allografts for use in the reconstruction. 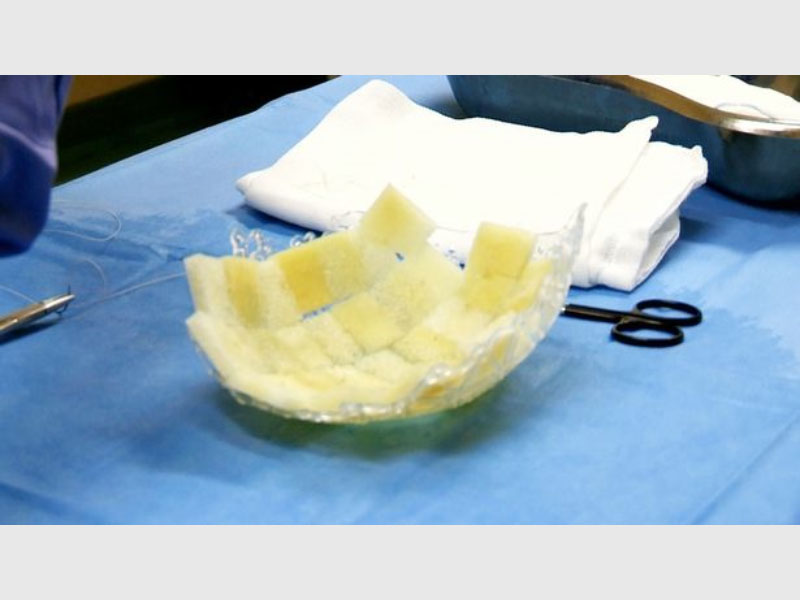 The implant used in Grace’s second operation was designed and produced by KLS Martin and Bacterin inconjunction with 3D Systems. The personalized implantis restoring a normal bone structure to Grace’s forehead. Image courtesy of 3D Systems.

“The manufacturing process for the customized 3Demin allografts required that the molds be sterilizable and specific to the processing requirements for Bacterin’s 3Demin Fiber Technology,” says Mike Rensberger, who heads up 3D Systems’ VSP Reconstruction services.

“Using the same SLA technology and resin that we used to produce the models and templates for Dr. Salyer’s reference, we were able to produce these highly precise, case-specific, custom-made parts much more rapidly than could be achieved using traditional techniques such as machining or injection molding.”

The state of Grace

Grace’s second surgery was considered a success by all involved. Her skull is calcifying with her own bone and her palate and mouth are closing normally. Her eating, speaking and breathing are normal for her age. Grace’s next and final surgery is scheduled for April 2016. It will center on soft-tissue construction of her nose and nasal passages, upper lip, and areas surrounding her eyes. 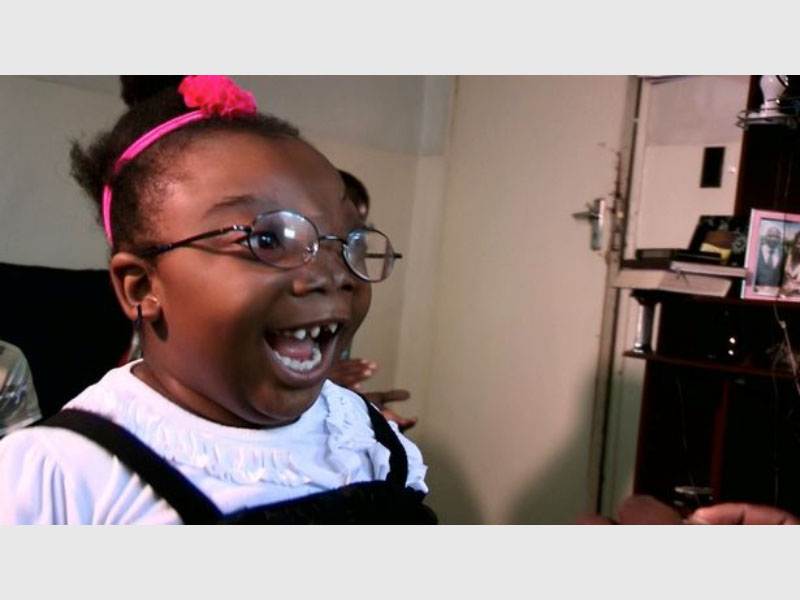 In his autobiography, A Life that Matters, Dr. Salyer says: “Early in my life, I found my calling and committed myself to a life that would matter—to spending the years allotted to me giving children faces that would allow them to shape lives of their own that would matter as well.” The same commitment can be found from all those who contributed to Grace’s surgery and recovery. Thanks to them, her life will not be a mere footnote, but a fully formed, long-running story.