The technology was developed out of the Aston Lab in Purdue’s College of Science, headed by Graham Cooks, the Henry B. Hass distinguished professor of analytical chemistry. Valentina Pirro, a research scientist in Purdue’s Department of Chemistry, was also instrumental in the technology’s development.

The team’s morphologically-friendly mass spectrometry imaging technique could determine if microscopic cancerous tissue is still present in a sample and thus provide more information to influence a surgeon’s decisions regarding further tissue removal.

“Mass spectrometry can identify and measure molecules within a tissue by measuring a signal that relates to the mass and structure of the molecule. It can be used in cancer diagnostics because it’s able to monitor the differential distribution of lipids or malformed metabolites that distinguish normal and cancerous tissue,” she says. “With some form of mass spectrometry imaging, the chemicals or solvents used in the process can often destroy the tissue sample. Essentially, you have one shot at getting the data and then the sample is gone.” 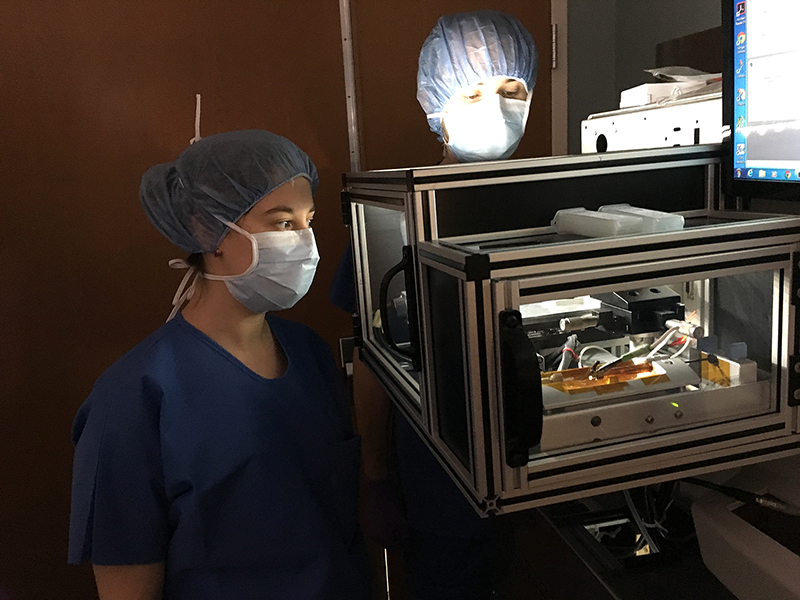 Valentina Pirro, a research scientist in Purdue’s Department of Chemistry, works in the operating room with a newly developed technology that within minutes could tell surgeons if a cancerous tumor is still present in a tissue sample and estimate the percentage of infiltration. The technology is patented through the Purdue Research Foundation Office of Technology Commercialization and is available for license. (Image credit: Valentina Pirro)

Cooks and his research team have developed a morphologically friendly method for tissue imaging that can be used to perform Desorption Electrospray Ionization Mass Spectrometry (DESI-MS).

“Our method allows researchers to choose solvent combinations that don’t affect the morphology, or form, of the tissue. This means the tissue’s native structure is preserved and after the experiment you’re able to take your tissue and stain it or use it for other experiments to retrieve complementary chemical information,” Pirro says. “The analysis is extremely simple and straightforward, because we can analyze tissue sections or smears with no sample preparation and then validate our results with standard histopathology. Essentially this solvent is used as a spray that is directed onto a small area of a sample and extracts molecules contained within. We can run an image by simply moving the spray right on top of a tissue section or smear.”

This assessment can be completed quickly while in the operating room, without interfering with the surgery, Pirro adds.

“We were able to modify a commercial DESI-MS instrument so that it sits on top of a cart as a standalone system and can be easily wheeled in the operating room when needed. Once a surgeon resects a small biopsy, we can smear it on a glass slide and analyze it as is. After a few minutes we can tell the surgeon if the tumor is still present in the tissue sample and estimate the percentage of infiltration,” she says. “By adding these objective measures, we are hoping that the surgeon will be guided in the resection and make fast decisions on whether or not to remove more tissue.”

Pirro says that preoperative MRI images are typically used to help guide surgeons; however, they are limited.

“Preoperative MRI images don’t always precisely translate to the area of surgery,” she says. “Additionally, there may be high infiltration of the tumor beyond what the MRI image is able to see. These limitations can cause difficulty in safely removing as much of the tumor as possible.”

The technical challenges for brain tumor surgery and treatment applications helped led the research team to this expanded use of the technology.

“Brain tumors are specifically complicated because they infiltrate into the brain and don’t make clear borders,” Pirro says. “In order to make sure the patient has the highest chance of survival, it’s imperative that as much cancer tissue as possible is removed while trying to minimize neurological damages.”

The technology is currently being used in preclinical settings.

“We have completed studies on a lot of tissue samples to confirm that we are able to get valuable diagnostic information. We are currently using the technique in the operating room in preclinical assessments where we perform our experiment without influencing the surgical practice itself,” Pirro says. “We have completed 18 different surgeries to show that the assessment is feasible, rapid, and robust. Additionally, we have been able to identify tissue highly-infiltrated with tumor even when the MRI images may say otherwise.”

Pirro said the next step for the technology is a clinical trial.

“Through a clinical trial the technology could influence the decision strategy. Ideally you would compare surgeries done with and without this technology and see if there is an improvement in the survival rate,” she says. “We imagine a company licensing this technology to take these next steps before eventually bringing it to market and provide this supplemental tool to surgeons everywhere.”