Humans can accurately sense the position, speed, and torque of their limbs, even with their eyes shut. This sense, known as proprioception, allows humans to precisely control their body movements.

Despite significant improvements to prosthetic devices in recent years, researchers have been unable to provide this essential sensation to people with artificial limbs, limiting their ability to accurately control their movements.

This new paradigm, known as the agonist-antagonist myoneural interface, involves a novel surgical approach to limb amputation in which dynamic muscle relationships are preserved within the amputated limb. The AMI was validated in extensive preclinical experimentation at MIT prior to its first surgical implementation in a human patient at Brigham and Women’s Faulkner Hospital. 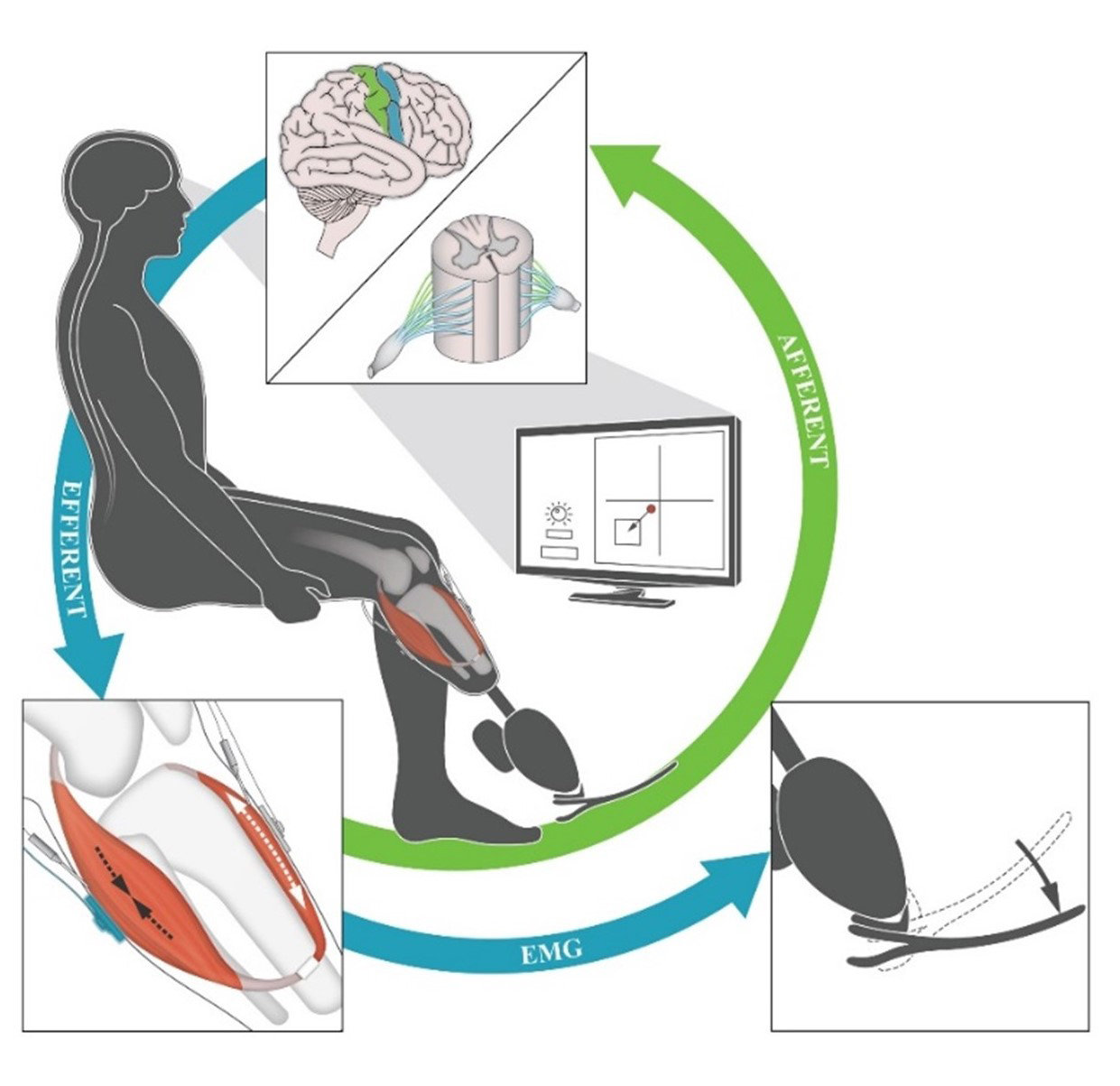 A schematic demonstrating the control mechanism of the neural interface. The subject’s leg movement is sent to the prosthesis as an EMG signal (blue arrows), and the movement of the prosthesis is communicated back to the subject’s nervous system (green arrow). Credit: T.R. Clites et al., Science Translational Medicine (2018)

In a paper published today in Science Translational Medicine, the researchers describe the first human implementation of the agonist-antagonist myoneural interface (AMI), in a person with below-knee amputation.

The paper represents the first time information on joint position, speed, and torque has been fed from a prosthetic limb into the nervous system, according to senior author and project director Hugh Herr, a professor of media arts and sciences at the MIT Media Lab.

“Our goal is to close the loop between the peripheral nervous system’s muscles and nerves, and the bionic appendage,” says Herr.

To do this, the researchers used the same biological sensors that create the body’s natural proprioceptive sensations.

The AMI consists of two opposing muscle-tendons, known as an agonist and an antagonist, which are surgically connected in series so that when one muscle contracts and shortens — upon either volitional or electrical activation — the other stretches, and vice versa.

This coupled movement enables natural biological sensors within the muscle-tendon to transmit electrical signals to the central nervous system, communicating muscle length, speed, and force information, which is interpreted by the brain as natural joint proprioception.

This is how muscle-tendon proprioception works naturally in human joints, Herr says.

“Because the muscles have a natural nerve supply, when this agonist-antagonist muscle movement occurs information is sent through the nerve to the brain, enabling the person to feel those muscles moving, both their position, speed, and load,” he says.

By connecting the AMI with electrodes, the researchers can detect electrical pulses from the muscle, or apply electricity to the muscle to cause it to contract.

“When a person is thinking about moving their phantom ankle, the AMI that maps to that bionic ankle is moving back and forth, sending signals through the nerves to the brain, enabling the person with an amputation to actually feel their bionic ankle moving throughout the whole angular range,” Herr says.