Scientists have created a flexible, bandage-like device that collects a person’s biometrics underwater.

The sweat sensor patch, which is described in the journal Science Advances, has tiny holes on the underside that sweat penetrates though; tiny channels carry the sweat to these chambers. Each chamber is its own individual, miniature test lab, where one chamber tests for fluid levels, another tests for sweat loss and chloride concentrations, and so on.

As time progresses, the excretions mix and react with chemicals in the device’s microchannels that cause the fluid to change colors. For instance, when the channels fill up, sweat mixes with the food dye in the serpentine channel and turns blue. This indicates how much sweat the user has lost. Meanwhile, another chamber changes color when electrolytes are lost, and goes from light pink to dark red.

“It’s almost like a time-dynamic skin tattoo,” said Rogers. “It becomes pretty engaging for the individual because you can watch what’s going on with your body chemistry on the device.”

The patch is waterproof and doesn’t need batteries since it draws power from radio waves from the environment around it. Data accumulated from the device is then transferred to a smartphone using near-field communications. To do this, the user would take a picture of the patch with his or her smartphone camera, and an app would analyze the information. This could indicate when the wearer has lost fluids or electrolytes and when it’s time to replenish.

The patch has been created for individuals who participate in water sports such as polo players, swimmers, triathletes, and more. Researchers said that metabolism differs between athletes, along with their sweat and its components. So monitoring components in sweat can give athletes, trainers, and doctors a better overall view on how a person’s body is performing while competing.

“A lot of the chemistry that’s happening in the body shows up in the sweat,” Rogers said. 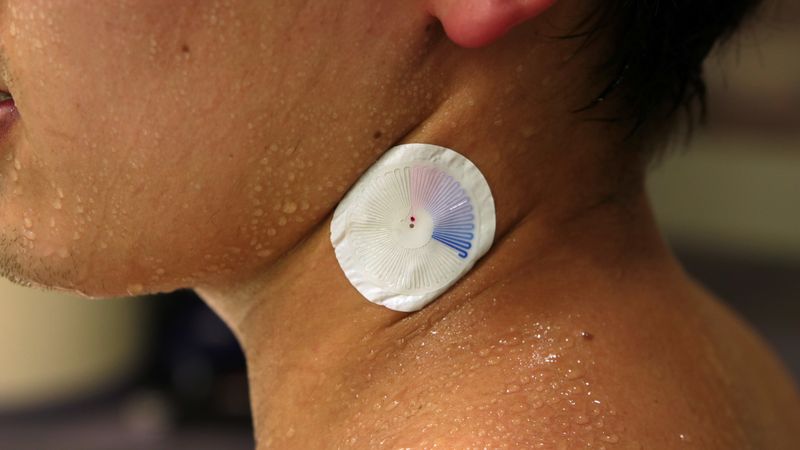 The device utilizes a strong, skin-safe adhesive to keep it watertight. The “bandage” measures 1.5 inches across. Additionally, flexibility was a key attribute of the patch since athletes are continuously moving and rely on movement to perform. The researchers said that although the patch was created for water, it can be used in other applications that do not involve water.

They researchers have tested their device on individuals engaging in real competition and reported that some of the devices held up for up to two hours of swimming. The device is not for sale, but the researchers are working with Epicore Biosystems to help get this patch on the market.

Eventually, Rogers hope that devices such as these could be used to asses body data in stroke patients, or detect kidney dysfunction by measuring creatinine and urea levels in sweat. Currently, Rogers said they’re sticking to sweat-sensing for sports and fitness.

7 digital health startups you need to watch in 2021