Surgeons at Duke University Hospital performed the first hand transplant in North Carolina, attaching the limb to a 54-year-old patient from Laredo, TX, whose hand was severed in a childhood accident.

The highly complex, 12-hour procedure was performed in late May by a team of 17 surgeons, 17 anesthesiologists, nurses, operating room staff and technicians, and was led by Linda Cendales, MD, associate professor of surgery at Duke University School of Medicine and director of Duke’s hand transplant program.

The transplant marks the inauguration of a clinical trial at Duke to determine the safety and efficacy of hand transplantation, and the efficacy of a new anti-rejection drug called belatacept. 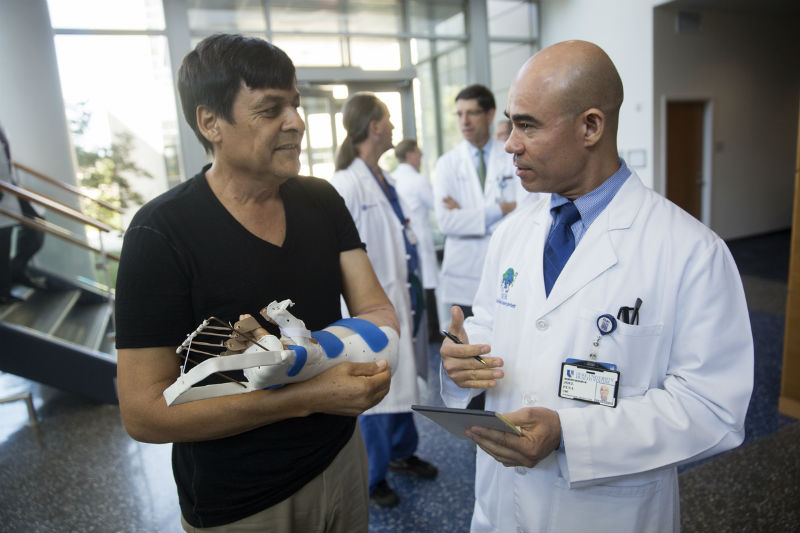 Rene Chavez, 54, of Laredo, TX, lost his hand in an accident when he was 4-years-old. Here, Chavez, wearing a custom made brace, speaks with his interpreter Joel Pena before a press conference. (Photo credits: Shawn Rocco / Duke Health, © Duke Health Photography)

“This is an exciting time for our patient, his family, and Duke,” Cendales said. “The patient is doing very well and is recovering from his surgery. He is excited about the possibilities that await him as he continues his rehabilitation.”

The patient, Rene Chavez, was flown to Duke on May 26 after a deceased donor was identified as a match (the donor remains anonymous). A construction worker and automobile dealer, Chavez became one of fewer than 90 people worldwide who have received a transplanted hand.

“I am so grateful to the family of the donor and I want them to know I will do all I can to honor their loved one,” Chavez said, adding that he feels he has already had some sensation in the new limb.

Chavez lost his dominant, left hand at the age of 4 when he reached into a meat grinder and his brother accidentally turned on the power. Through the years, he said through a translator, he learned to compensate, playing soccer and even riding motorcycles.

But he said he became determined to have a hand transplant after learning three years ago that the procedure was becoming more widely available with advances in surgical techniques and anti-rejection drugs.

Chavez said he looks forward to relearning all that he taught himself to do without his hand – a process that will take months of intensive physical therapy sessions.

“I want to take the experience so people can see that you can overcome adversity if you strive for a goal,” Chavez said.

Duke is one of only about 10 hospitals in the U.S. that has performed a hand transplant. The surgery is difficult, involving an intricate process of connecting bone, blood vessels, muscle, nerve, tendons, and skin. Matching the limb from a deceased donor is also complex, as is the control of rejection, adding to the rarity of the procedure.

Prior to Emory, Cendales trained at the Christine M. Kleinert Institute for Hand and Microsurgery in Louisville, Ky., where she helped establish the first hand transplant program in the country, and was among the team that performed the first two cases in the United States in 1999 and in 2001.