Therapy dogs can bring more than joy and comfort to hospitalized kids. They can also bring stubborn germs.

Doctors at Johns Hopkins Hospital in Baltimore were suspicious that the dogs might pose an infection risk to patients with weakened immune systems. So they conducted some tests when Pippi, Poppy, Badger and Winnie visited 45 children getting cancer treatment.

They discovered that kids who spent more time with the dogs had a 6 times greater chance of coming away with superbug bacteria than kids who spent less time with the animals. But the study also found that washing the dogs before visits and using special wipes while they’re in the hospital took away the risk of spreading that bacteria.

The results of the unpublished study were released Friday at a scientific meeting in San Francisco.

One U.S. health official said the findings add to the growing understanding that while interactions with pets and therapy animals can be beneficial, they can also carry risk.

“Whether covered in fur, feathers or scales, animals have the potential to carry germs that make people sick,” said Casey Barton Behravesh of the Centers for Disease Control and Prevention.

Pet therapy can help people recover from a range of health problems. Past studies have shown dogs or other animals can ease anxiety and sadness, lower blood pressure and even reduce the amount of medications some patients need.

But there have been episodes of the superbug MRSA riding around on healthy-looking therapy dogs. 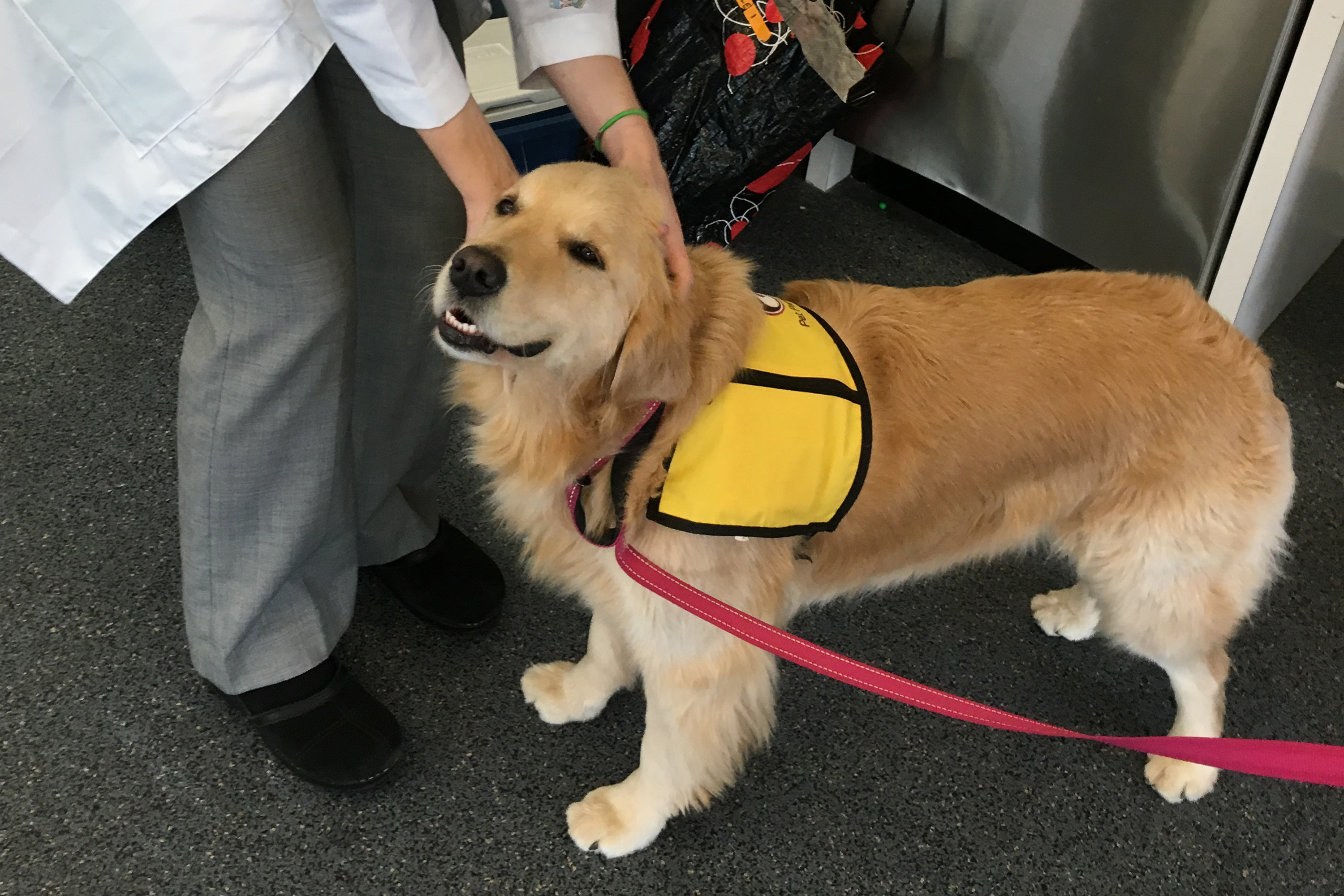 This March 2017 photo provided by Johns Hopkins University shows therapy dog Winnie at the university’s hospital in Baltimore, Md. Therapy dogs who visit hospital patients can bring joy, affection, and _ superbug bacteria _ according to a new study by Johns Hopkins released Friday, Oct. 5, 2018. Casey Barton Behravesh of the Centers for Disease Control and Prevention said it adds to the growing understanding that while interactions with pets and therapy animals can be beneficial, they can also carry risk. (Meghan Davis/Johns Hopkins University via AP)

MRSA, or methicillin-resistant Staphylococcus aureus bacteria, often live on the skin without causing symptoms. But they can become more dangerous if they enter the bloodstream, destroying heart valves or causing other damage. Health officials have tied MRSA to as many as 11,000 U.S. deaths a year.

The bacteria can spread in daycares, locker rooms and military barracks, but public health efforts have focused on hospitals and nursing homes.

The Baltimore study looked at 45 children who interacted with the four dogs — petting, hugging, feeding or playing with them — over 13 visits in 2016 and 2017.

Among kids who had no MRSA, the researchers found the superbug on about 10 percent of the samples taken from those kids after the dog visits. They also found MRSA on nearly 40 percent of the samples from the dogs. The researchers also determined that the more time someone spent with the animals, the greater the chance of ending up with the bacteria.

The researchers think the dogs were generally clean of MRSA when they first came to the hospital, but picked it up from patients or others while they were there, said one of the authors, Meghan Davis.

“Our hypothesis is it’s really person-to-person transmission, but it happened through contact with the fur,” said Davis, a Johns Hopkins public health researcher and veterinarian.

Under hospital protocols, therapy dogs must be bathed within a day of a visit and are checked for wounds or other health problems. Children who see them are supposed to use hand sanitizer “but that wasn’t strictly enforced,” said Kathryn Dalton, another one of the researchers.

Later in the study, the researchers asked the dogs’ owners to bathe the animals with a special shampoo before the visits. They also had the dogs patted down every five to 10 minutes with disinfecting wipes at the hospital.

Those steps dramatically decreased the bacteria level on the dogs, Dalton said.

She hopes further study will show that such cleanings can reduce any risk of superbug infection.

“I really had the opportunity to see how important these dogs were to the patients,” Dalton said. After the sessions with the dogs, the kids “would say how much this made their day.”