The polymerase chain reaction (PCR) is a biochemical technology in molecular diagnostics that amplifies a single copy or a few strands of DNA across several orders of magnitude, generating several hundred thousands of copies of a particular DNA sequence. The method relies on thermal cycling, consisting of cycles of repeated heating and cooling of the reaction for DNA melting and enzymatic replication of the DNA. PCR requires a high number of thermal cycle steps to create thousands of strands of DNA sequencing for analysis. This is a harsh environment for standard thermoelectric modules due to the mechanical stresses that occur during heating and cooling stage. Recent advances in thermoelectric module (TEM) technology have improved thermal cycling efficiency, reliability and operating life to lower the overall cost of ownership of PCR equipment.

Polymerase Chain Reaction
PCR-based testing is used in the diagnosis of tumors, hereditary diseases and the detection of infectious diseases. Primers (short DNA fragments) containing sequences complementary to the target region along with a DNA polymerase — after which the method is named — are key components to enable selective and repeated amplification. As PCR progresses, the DNA generated is itself used as a template for replication, setting in motion a chain reaction in which the DNA template is exponentially amplified. PCR can be extensively modified to perform a wide array of genetic manipulations.

Thermal Cycling
Typically, PCR consists of a series of 20 to 40 repeated temperature changes, called cycles, with each cycle commonly consisting of the following main temperature steps. The cycling is often preceded by a single temperature step at a high temperature (>90°C), and followed by one hold at the end for final product extension or brief storage. The temperatures used and the length of time they are applied in each cycle depends on a variety of parameters.

PCR is carried out in special molecular diagnostic device called a thermal cycler, also known as a thermocycler. In the thermocycler, precise temperature control is required during heating and cooling of each process temperature. Fast temperature ramps rates of up to 10°C per second are required to minimize the total duration of amplification. The control side consists of a cold block with machined surface to accommodate sample wells. Minimal temperature gradient is required across the cold block to minimize overshooting of temperature over an entire sample well, which can be challenging for automated PCR machines that use a larger number of wells. The heat rejection side consists of a heat sink and fan with heater cartridge. Often a secondary control loop is used here to keep the temperature of the heat rejection side stable while the control side is fluctuating across a 40°C temperature differential.

Standard TEMs
Due to the rigid structure, thermal cycling exposes TEMs to mechanical stresses, as the module contracts and expands from repeated cooling and heating cycles. These severe mechanical stresses are induced when a TEM is under a temperature differential and thermal cycled over a long period of time. The thermal contraction causes the cold side ceramic to shrink in size, while thermal expansion occurs on the hot side ceramic substrate. The semiconductor elements are mechanically attached to both sides with solder and experience a shear stress at the solder joints. This is the primary root cause of standard TEM field failures, as standard TEMs are traditionally designed for refrigeration applications only. The high-temperature diffusion of impurities and mechanical stresses over time significantly reduces the operational life of a standard TEM.

Advanced TEM Technology
However, new thermoelectric modules have been developed specifically for high reliability applications like thermal cycling, which require extended mean time between failures (MTBF). For example, Laird’s new PC Series is constructed with four solder layers that have solder joints between the ceramic substrates, cooper buss bars and semiconductor couples. To reduce the thermally induced stress, a flexible and thermally conductive “soft layer” is inserted between the cold side ceramic substrate and copper buss bars. (See Figure 1) 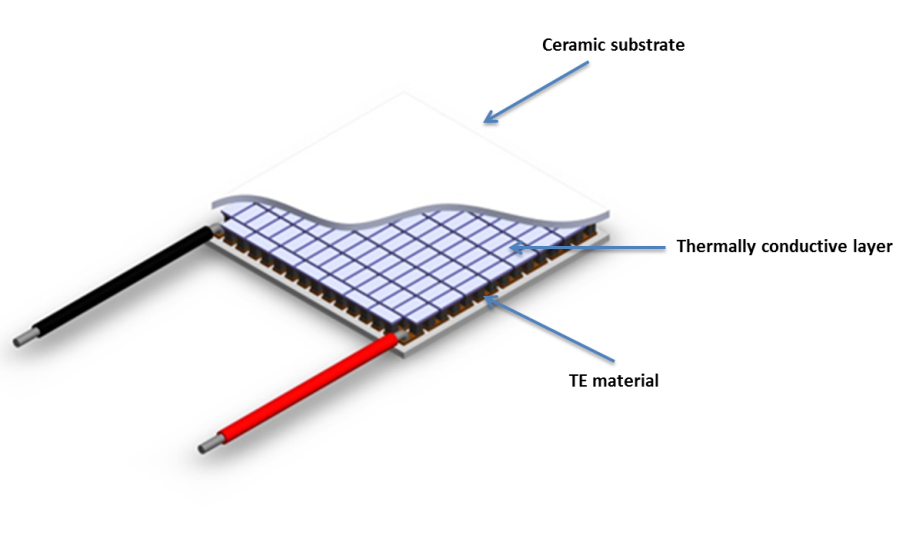 The integration of the polymer soft layer into the TEM accommodates movement from the semiconductor elements by absorbing the mechanically induced stresses caused by temperature cycling. As a result, the stress induced on the semiconductor couples and solder joints are significantly reduced, extending the overall operational life of the TEM. This effect is illustrated in Figure 2. Note that the semiconductor pellets are strained into a trapezoidal shape in a ceramic-based TEM, whereas they remain almost rectangular in the PC constructed TEM. The strains have been exaggerated to enhance visualization.

New TEMs can handle hundreds of thousands of thermal cycles with minimal degradation. This exceeds the requirements for PCR machines and provides a lower total cost of ownership, while increasing opportunity to sell more reagents.

Validation Testing
The PC Series TEMs have passed Telcordia GR-468-CORE Issue 2 reliability testing and have accumulated more than 600K reverse power cycle testing. A copy of the validation test report can be obtained upon request. Telcordia Technologies publishes and maintains a set of test specifications for optoelectronics components used in telecommunications devices, including thermoelectric modules. The test specifications include protocols for high temperature storage, temperature cycling, mechanical shock, vibration and on/off power cycling. Since the new TEM technology is designed for thermal cycling applications, the reverse power cycling test was used instead of the on/off power cycle test. All five tests were carried out on the modules.

The tests performed differed from those specifications in Telcordia GR-468-CORE Issue 2 in the following ways:

High temperature storage stress testing was performed at 100°C, which is a more common in PCR application than 80°C requirement in specification. PC TEMs passed despite exposure to higher temperature.

Temperature cycling was performed with 500 cycles, -40~85°C, hold each temperature for 30 mins, and at a faster rate of temperature change than specified, which is more common in PCR application. PC TEMs pass despite the higher severity test condition.

Reverse power cycling was conducted instead of on/off cycling, with 0.8Vmax, cycling temperature was 40~90°C , and occurred for more than 500K cycles, which took nearly seven months to complete. The PC Series TEMs passed despite the higher severity test condition.

Average results of stress tests are shown in Figure 3. The degradation of the TEMs was measured by changes in the A/C resistance. Note that the two stress tests that caused the largest resistance changes were the tests that were performed more aggressively than required by the standard specification. The A/C resistance changed was less than 1.0% after all stress tests meaning the performance changed very little after seven months of reverse power cycling, which validates that the new modules have high reliability in thermal cycling applications. 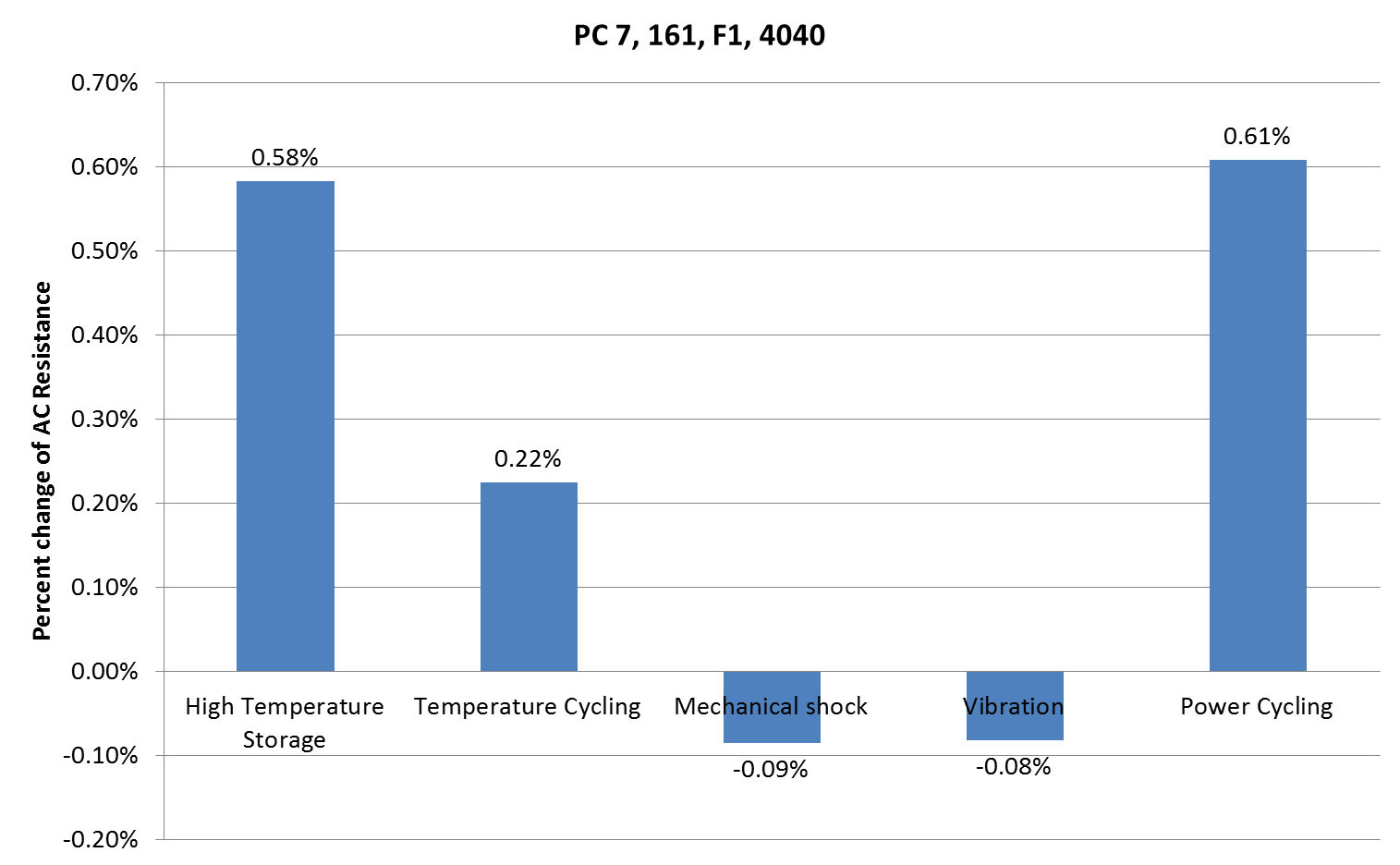 Performance
After testing the new modules under strenuous conditions, the advantages of thermal cycling capability over standard TEMs became apparent. Figure 4 shows data of more than 500K reverse power cycles comparing standard compared the new TEM technology. The A/C resistance change for the modules tested was less than 0.61%. However, for standard modules 5 of 11 pcs showed hot spots under an IR imaging system after test. The average A/C resistance change was more than 5.0%.

The performance of a TEM is measured by the maximum temperature differential, ΔTmax that can be achieved across the module and its heat pumping capacity, Qmax. These parameters are determined by the figure-of-merit, ZT of the semiconductor elements. For further information, download the Thermoelectric Handbook.

Adding a thermally conductive soft layer between the copper buss bars and ceramic substrate has minimal impact to thermal resistance. The proprietary soft layer has a thermal conductivity of 1.92 W/mK and based on data, the performance will be degraded if the thickness is greater than 0.1 mm’s. Since the thickness of the soft layer is controlled to within 0.03 mm’s, the performance of the PC Series TEMs will be similar to that of standard TEMs without the soft layer.

Conclusion
PCR is a fundamental technique to produce millions of copies of a specific DNA sequence. PCR uses thermal cyclers to heat and cool a DNA sample based on a predefined series of temperature steps to facilitate the amplification of DNA and identify biomarkers. Long term power cycling will fatigue standard TEMs by creating micro-cracks in the semiconductor elements or solder joints, which degrade the performance over time. Advances in thermoelectric technologies using a proprietary thermally conductive soft layer that absorb the mechanical stresses can extend the life of the thermoelectric module. These new thermoelectric modules are specifically designed to handle hundreds of thousands of thermal cycles with minimal degradation. This has been validated thru more than seven months of testing with 600K reverse power cycles.