Nobody wants to be told they are going to die. Yet that’s the prognosis Wayne Eskridge received from his doctors in 2010. The diagnosis was a stage-four case of cirrhosis of the liver. As he and his family despaired over the future, he received another medical opinion, saying this time that he was fine with no liver disease. He was counting his blessings, but later the emotional rollercoaster took another dive when the diagnosis reversed once more. “Over a period of four years I was told I was seriously ill and then told I was not and later I was told that I had a progressive liver disease caused by iron,” Eskridge said from his home in Boise, Idaho. “I did not know where I stood, but I gave seven liters of blood to treat the iron problem. Later that diagnosis was judged to also be wrong. I felt the information I was getting was insufficient but didn’t know where to turn. It’s a journey that drove my wife and me crazy.” 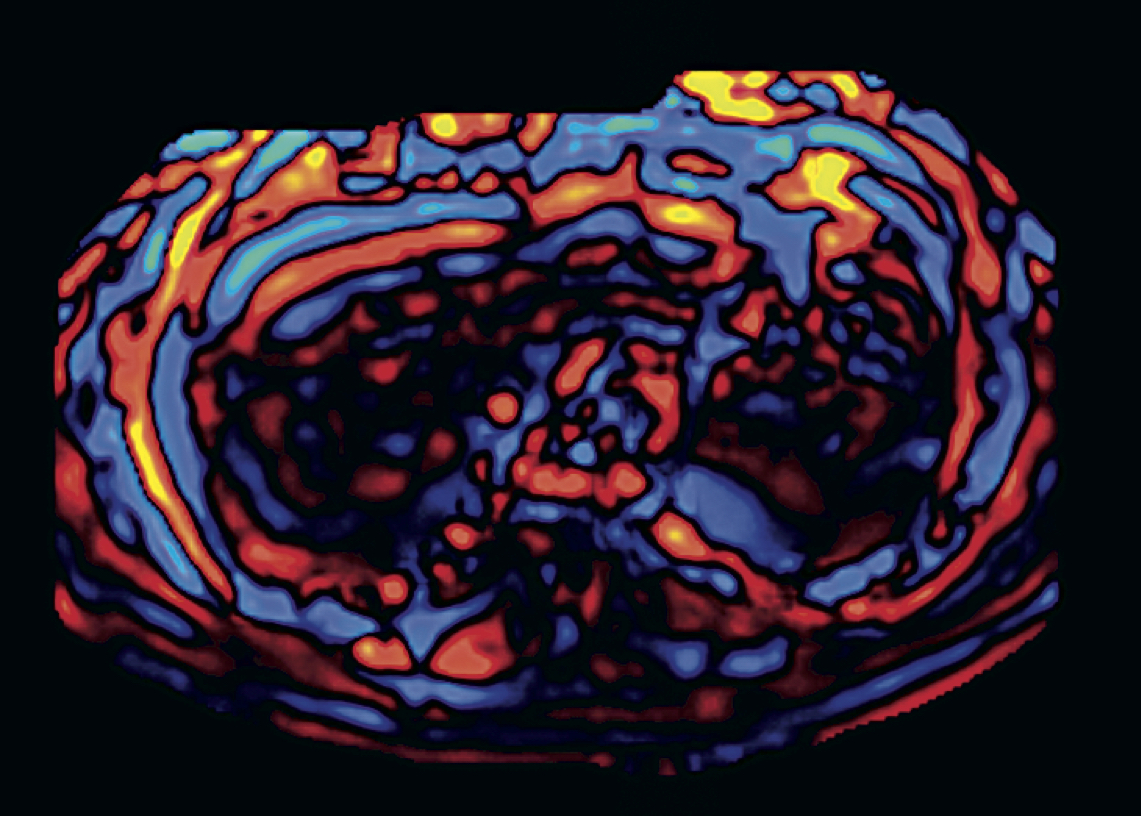 A 16 year old obese patient with elevated liver enzymes and fatty liver infiltration on ultrasound and MR. The MR elastography (MR Touch) was performed to evaluate tissue stiffness prior to a planned biopsy. (All images credit: GE Healthcare)

Eskridge’s nightmare finally ended in 2014 when a new MRI scan aided the doctors in their diagnosis of nonalcoholic steatohepatitis (NASH) – a “silent” liver disease afflicting people who drink little or no alcohol. Eskridge now knows he has stage-three/four cirrhosis — an advancing case of liver disease, but not necessarily a fatal diagnosis. He believes his prognosis would be better had he been diagnosed four years earlier.

Doctors performed an MRI scan with an imaging technique called MR-Touch. MR-Touch is a medical imaging technique that provides an elastogram – a color-coded anatomical image showing varying degrees of elasticity or stiffness in soft tissue which then aids the clinicians in their diagnosis of disease. In this case it was liver disease. GE developed MR-Touch in partnership with the Mayo Clinic. It can capture the image in just 14 seconds, a short time for most patients to hold their breath.

Eskridge’s liver trouble began in December 2010, after surgery to remove his gangrenous gallbladder. The initial diagnosis was based on obvious liver damage observed by his surgeon. A subsequent biopsy showed no liver disease, a finding that made little sense. That started Eskridge on his tortuous four-year journey of back-and-forth visits to primary care physicians, gastroenterologists and hematologists. He underwent a battery of tests, including blood draws, ultrasounds, biopsies and MRIs, and received diagnoses ranging from no liver disease to hemochromatosis — too much iron in the body resulting in stage 4 cirrhosis.

“We had several years of trying to figure out what was going on and not being successful,” he says. Frustrated, the 73-year-old engineer, who runs an online lighting business, went so far as to take a pathology course online at Tufts University to learn more about his liver. 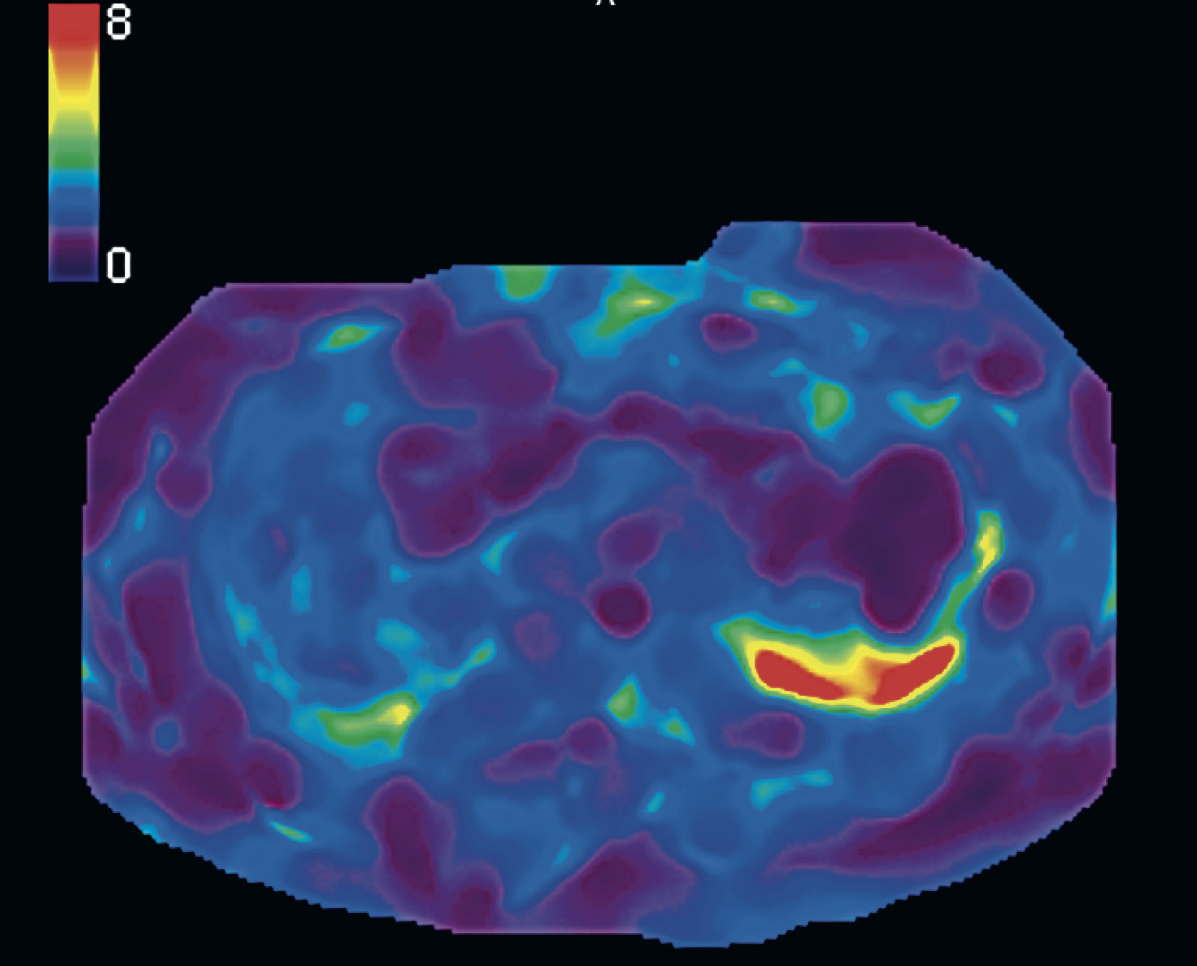 The MRE showed normal liver stiffness, indicating the presence of simple steatosis, but no fibrosis or inflammation. The biopsy was cancelled.

In 2014, Eskridge’s liver mystery was solved when he and his wife, Rosemary, met Dr. Michael Charlton of Salt Lake City, who prescribed an MR-Touch scan that assisted the clinicians in their diagnosis of NASH and visualized the extent of the liver damage. NASH is difficult to detect because most patients are asymptomatic and don’t have high risk factors.

Eskridge believes that if he had not been diagnosed by his clinician using the MR-Touch imaging technique his disease likely would have progressed to a fatal stage-four case of cirrhosis. He now has hopes — and a fighting chance — of stopping the disease.

He’s keeping himself healthy through lifestyle changes, including increased exercise, weight loss and the elimination of harmful saturated fats. He instead consumes significant amounts of unsaturated fats in extra-virgin olive oil and liver-supportive supplements as part of a restricted Mediterranean diet — things he says he would have done earlier had doctors correctly diagnosed his illness. “Had I had the same counsel after my 2010 surgery, I probably would not be at stage-three/four cirrhosis today,” he says.

At least 30 million people in the United States — one in 10 — have some form of liver disease. Medical imaging techniques like MR-Touch and new cloud-based software that precisely highlight what clinicians need to see for them to effectively treat liver disease could mean more precise care for patients and productivity for clinicians.

MR Touch assesses the stiffness of a patient’s liver and is especially valuable in evaluating and assisting the clinician in their treatment plan for fatty liver disease.

“Absent better diagnostic tools, my doctors did all that I could ask of them. My story is not unique as many people have silent liver disease. It’s a problem that may become more common as my generation, with our industrialized diet and poor habits, gets older,” Eskridge says.

Already the MR-Touch imaging technique and GE software called FlightPlan for Liver are helping doctors treat liver cancer. Previously, liver cancer was particularly difficult to deal with because the liver’s complex vascular structure made it hard for doctors to find which blood vessels fed a tumor. Using MR-Touch and the software, surgeons now have more detailed imaging to help them prepare for an embolization to surgically block blood vessels feeding a tumor.