Rice University bioengineers have developed a tool to standardize data obtained through flow cytometry, one of the most widely used instruments to analyze living cells.

The Rice lab of Jeffrey Tabor has released FlowCal, an open-source software package that improves the ability of researchers to quantitatively compare flow-cytometry data.

The software is detailed in the American Chemical Society journal ACS Synthetic Biology.

“This is a much-needed software tool to help standardize data in synthetic biology,” Tabor said. “Specifically, it will allow biologists in different laboratories and across different publications to compare their measurements to one another. It should help advance synthetic biology from an ad hoc to a mature engineering discipline.”

Labs use cytometry to gather information about biological processes within cells as they flow through the instrument. “It can measure fluorescent signals from tens of thousands of cells in a couple of minutes,” said Sebastián Castillo-Hair, who led the project with John Sexton. Both are graduate students in the Tabor lab. “This is useful because fluorescent signals represent a lot of things in cells. In synthetic biology, for example, fluorescence represents the output of a genetic circuit.”

The lab programs genetic circuits in cells – the biological equivalent of electronic circuits – to sense, compute and respond to their environments. Fluorescent reporter proteins are placed into the circuitry because they are easy to detect and allow researchers to measure and debug the circuit’s performance.

“We can get a lot of information from flow cytometry,” Castillo-Hair said. “We can not only get the average fluorescence of many cells; we actually obtain the fluorescence of each individual cell. This gives us a nice fluorescence distribution across the whole cell population. And there’s a ton of biological information that can be extracted from that.”

The problem for bioengineers has been that results from different labs – or even from different instruments in the same lab – are impossible to compare quantitatively.

Flow cytometers produce data in what researchers call “arbitrary units” that are subject to variables like the instrument brand and its settings and calibration. By using commercially available calibration particles to establish a baseline, these units can be converted to more standardized “molecules of equivalent fluorophore” that allow for comparison. But because no convenient, nonproprietary tool existed to perform the calibration, arbitrary units have been impossible to match up. 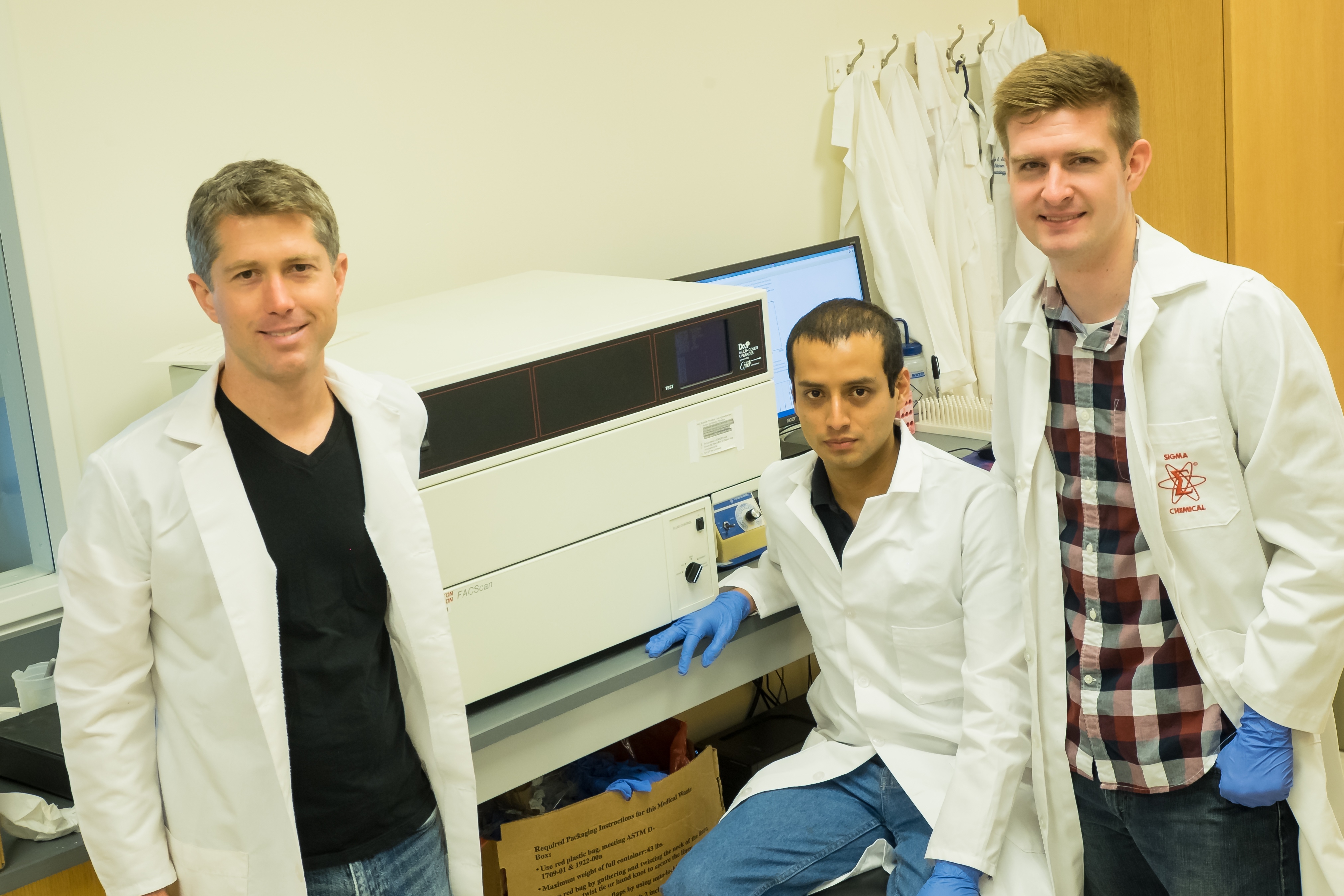 So the project was born out of frustration. “We both have backgrounds in more traditional engineering disciplines,” Castillo-Hair said. “I’m from mechanical engineering; John is from electrical engineering. We’re familiar with having numbers that actually mean something.”

“We’re engineers at heart, and we need to characterize the things we build,” Sexton added. “To date, in this field, we’ve largely been playing in our own sandboxes, which is very frustrating for somebody who’s trying to take things that other people have made and use them in your own research. It was clear to us that we needed to use the same yardstick everywhere.”

“This software is a big step,” Castillo-Hair said. “It allows you to refer gene expression units to a common number that you can very easily compare to what other people have measured in your lab, even when completely different instrument settings have been used. With a few additional steps, data from different instruments and labs can become comparable as well.”

To make it accessible to the largest number of researchers, the program has been designed to work with Microsoft Excel, for which the Rice team has designed templates. Once a simple Excel file is prepared, FlowCal reads and processes data from calibration particles. This information is then used to convert cell fluorescence to calibrated units. Finally, the program generates an Excel file with cell fluorescence statistics and a set of plots of calibration particles and cell samples.

Sexton said FlowCal has become a standard tool in the Tabor lab. “This is easy enough to use that even people without any programming knowledge can pick it up really quickly,” he said.

The researchers programmed FlowCal in the common Python language and encourage others to add on or modify it to suit their own needs. “We’ve made it pretty easy to collaborate, if other people want to add to it,” Sexton said. “We’re open to feedback.”