Tiny electronic sensors and devices that can be implanted in the body and then dissolve almost without a trace are getting closer to reality. Scientists have tested several biodegradable materials, including DNA, proteins and metals, for making transient electronics. Now one team, reporting in the journal ACS Applied Materials & Interfaces, has taken another step toward this goal. They created a dissolvable device component out of egg proteins, magnesium and tungsten. 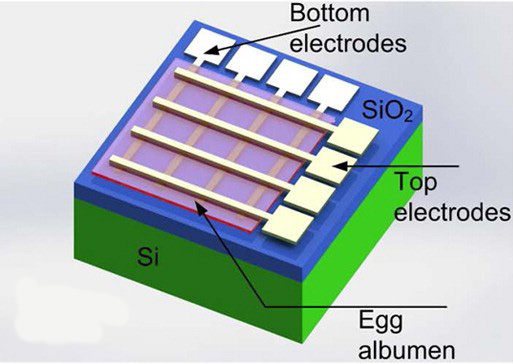 Transient electronics have many potential applications from localized drug delivery to pollution monitoring. To explore these possibilities, scientists have been working with an array of natural materials to test how well they perform in electronic devices and whether they might cause side effects or damage when implanted. Unlike conventional electronics that contribute to a growing amount of harmful waste, dissolvable devices are designed to be compatible with the environment. Jikui Luo, Xiaozhi Wang and colleagues wanted to build on this work and develop a transient memory resistor with dissolvable components. This electronic component, also called a memristor, is a new type of resistor that regulates the flow of electric current and also can “remember” charges.

The researchers rapidly spun diluted egg albumin, the white part of an egg, on a silicon wafer to turn it into an ultra-thin film. Then they incorporated electrodes made out of magnesium and tungsten. Testing showed that the device’s performance matched that of non-degradable memristors. Under dry conditions in the lab, the components worked reliably for more than three months. In water, the electrodes and albumin dissolved in two to 10 hours in the lab. The rest of the chip took about three days to break down, leaving minimal residues behind.