A team with funding from the National Institutes of Health has created a new simulator that allows clinicians who perform a complicated ultrasound technique to gain practice on a mannequin before trying it on patients. This is the first simulator for duplex ultrasound scanning, a type of ultrasound used to assess the health of blood vessels.

The simulator consists of a mannequin and mock ultrasound transducer hooked up to a computer that displays images taken from real patients. Trainees are given the details of a case and then told to scan the mannequin as they would a patient with those symptoms.

“The simulator will measure where the trainee put the probe on the mannequin, how it was positioned, which way it was pointing, and what control settings were used,” said Florence Sheehan, M.D., director of the Cardiovascular Research and Training Center at the University of Washington in Seattle.

The trainee practices measuring a simulated patient’s blood flow velocity and coming up with a diagnosis and treatment plan.

“It’s going to encompass everything, not just acquiring the image,” Sheehan said.

Duplex ultrasound scanning goes beyond the black-and-white, two-dimensional images associated with typical ultrasound. It reveals the direction and velocity of blood flow, to classify problems such as narrowing blood vessels and blockages. However, training simulators for this type of imaging haven’t previously existed. Once trainees pass a computerized test, they have been expected to use duplex ultrasound in the clinic—possibly increasing risk and discomfort for patients. 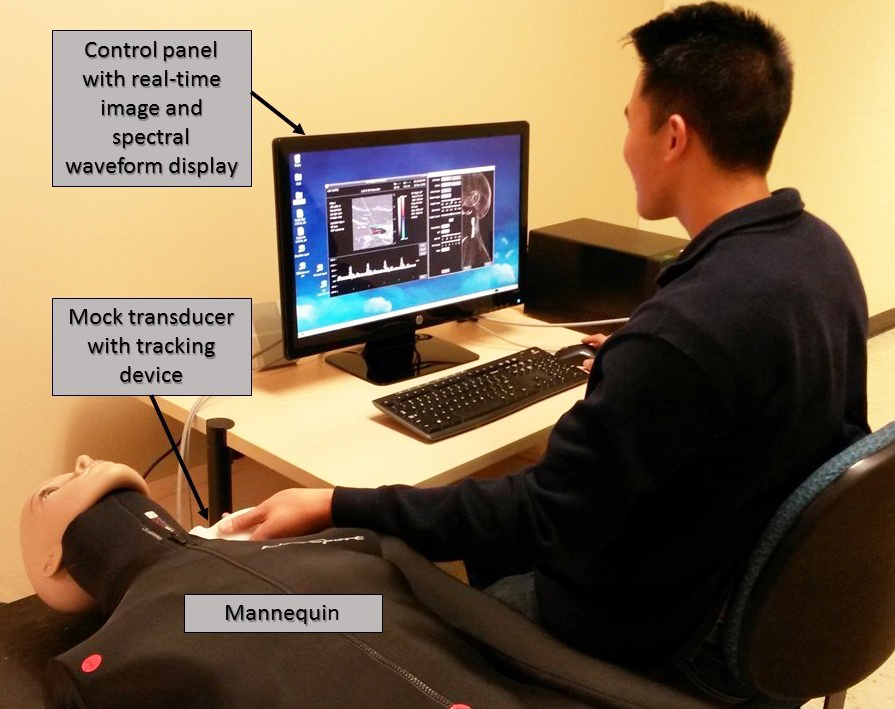 An operator is familiarized with the computer display of the duplex ultrasound training simulator while manipulating the ultrasound transducer on a manequin’s neck. (Credit: Florence Sheehan, University of Washington)

“It is difficult to determine if someone has the technical skill to put a hand on the transducer, put the transducer on the right place on the patient, and get a good image,” Sheehan said.

Working with researchers from the University of Washington departments of surgery, mechanical engineering, and medicine, and the University’s Applied Physics Laboratory, Sheehan set out to engineer a simulator for trainees to gain practice with duplex ultrasound. The project was supported in part by the National Institute of Biomedical Imaging and Bioengineering (NIBIB).

Expert examiners validated the simulator’s accuracy on two cases. Next, the University of Washington team plans to add more cases so that trainees experience a wide range of both common and rare vascular problems before they even get to the clinic.