An FDA-approved clinical trial is underway at Massachusetts Eye and Ear and Massachusetts General Hospital for Children to evaluate the use of a hypoglossal nerve stimulator — a technology currently available to adults with severe obstructive sleep apnea (OSA) that stimulates the upper airway to facilitate breathing during sleep — in a select group of adolescent patients with Down syndrome and OSA. A case report on the first patient in the trial — whose implantation on April 8th, 2015, represented the first time the technology has been used in a pediatric patient in the United States — has been published in the May issue of Pediatrics. The clinical trial will now be expanded to include four additional sites in the U.S.

“While we have a long way to go in demonstrating the safety and efficacy of this technique, this case represents a significant first step,” said Christopher J. Hartnick, M.D., lead investigator of the study and director of the pediatric otolaryngology division at Mass. Eye and Ear. “The most compelling aspect of this research is the potential to help a population for which there are often no good treatments available.”

Affecting up to 60 percent of patients with Down syndrome, severe OSA presents unique treatment challenges. Key anatomical characteristics, such as larger tongues that fall back in the mouth during deep sleep, can obstruct the airway during sleep; and sensitivity to air blowing onto their faces through a mask makes it difficult for some patients to tolerate a continuous positive airway pressure (CPAP) machine, the traditional therapy for OSA.

Without favorable options to turn to and with the threat of cardiovascular issues like high blood pressure and heart disease if sleep apnea is left untreated, physicians and patients’ families are sometimes left with the difficult decision to resort to life-altering tracheostomies, if the obstruction is severe enough to be unsafe.

By activating a branch of nerves in the upper airway, the hypoglossal nerve stimulator causes the tongue to move forward and out of the airway during sleep. Surgical implantation involves a cuff placed around selective branches of the nerve and then connected by wires to a receiver in the chest and to a sensor below the ribs. The sensor detects interruptions in the patient’s breathing and sends up a signal to the stimulator cuff to set the process into motion. Patients and their physicians can program the technology to turn on at a certain time each night, approximately half an hour after the child goes to sleep. 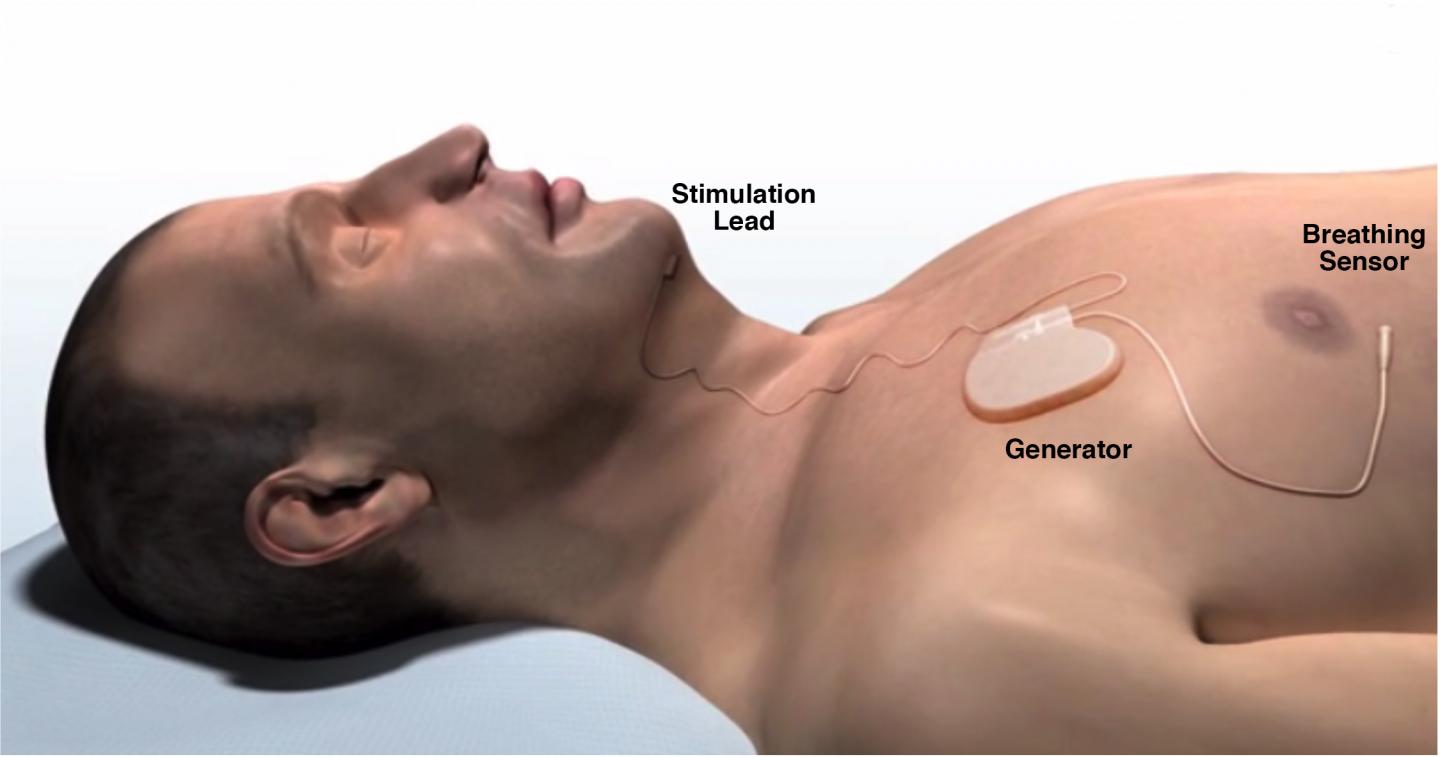 The first patient, a 13-year-old boy who previously required a tracheostomy tube to breathe because he could not tolerate a CPAP machine, has responded favorably to the therapy. Three months following the surgery, his sleep study results showed a decrease of obstructive sleep apnea symptoms from an index score above 40 to below 10, and he has subsequently been able to have his tracheostomy tube removed with good results.

Four additional patients have been implanted since the first surgery was performed. Subjects in the clinical trial are being followed closely through office visits and sleep studies to thoroughly assess safety of the treatment.

“The hypoglossal nerve stimulator has the potential to be a game changer for the Down syndrome community,” said study co-author Brian Skotko, M.D., M.P.P., co-director of the Mass General Down syndrome program. “Certainly, for my patient with Down syndrome featured in this paper, the results were life changing.”