Diagnosing cancer is often a difficult process. Pathologists have to decide whether clusters of cells seem benign of malignant very quickly, or whether any lumps viewed on a mammogram are suspicious. Pathologists undergo years of training (in addition to medical school) to develop these skills. But do you know who—or should I say what—else does a surprisingly good job of diagnosing cancer? Pigeons!

In order to get a grasp on how pathologists develop cancer-detecting skills, researchers from the University of California, Davis and the University of Iowa have trained pigeons to tell the difference between healthy and cancerous tissue. According to a study published recently in PLOS One, they’re remarkably accurate.

Pigeons were showed microscopic images of breast tissue, and after looking at the image, pressed a yellow or blue button which matched up to either healthy or cancerous. Pigeons that answered correctly were given a tasty treat. After 15-hour-long sessions of this, it was found that pigeons identified cancerous tissue about 85 percent of the time.

The pigeons were also asked to identify cancerous breast tissue masses on mammograms. Unfortunately, pigeons could only memorize the correct answer rather than inspect a new image and determine if it was cancerous or not. Granted, the group of pathologists serving as the (human) control for the study inspected the same masses and were only correct about 80 percent of the time. 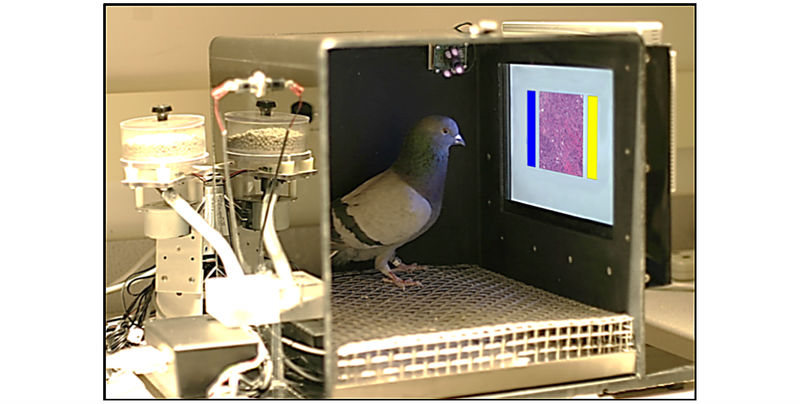 Pigeons won’t be replacing doctors anytime soon, though. Human pathologists are still up to 97 percent accurate for a difficult detection task, having been shown whole images instead of smaller areas. However, pigeons learning to spot cancer can shed some insight on how pathologists hone their skills over time.

Some interesting findings: color scheme and image brightness had no effect on the pigeons’ diagnostic accuracy, but at first they were thrown off by how much the image was compressed. Fortunately, over time, the pigeons adapted to image compression and were more accurate in their diagnosis. This aligns with how pathologists learn over time—humans eventually become used to less-than-ideal images.

So perhaps to gain an understanding of how pathologists—and their computer system counterparts—learn, we can figure out what pigeons inspect to make a diagnosis. Hopefully this can lead to more strategic training of pathologists and computer systems.