Overall, the survey from the Centers for Disease Control and Prevention found that 9.1 percent of Americans were uninsured in 2017, or a little more than 29 million people

After nearly a year of Trump, that was almost the same as toward the end of the Obama administration. For perspective, the uninsured rate dropped from 16 percent since the Affordable Care Act was signed in 2010, which translates roughly to 19 million people gaining coverage.

“Despite all the noise and despite the chain-rattling Republicans have done with their failed attempts at repeal, at the end of the day the number of uninsured has stayed flat,” said health economist Gail Wilensky, a longtime GOP adviser. “That’s good news for the country, and it might turn out to be good news for Republicans when it comes time for the midterm elections.”

But the CDC’s National Health Interview Survey also showed uninsured numbers edged higher for some groups, raising questions about potential problems this year and beyond. It doesn’t reflect congressional repeal of the health law’s unpopular requirement that individuals carry health insurance, since that doesn’t take effect until next year.

Considered authoritative by experts, the CDC report contradicts popular story lines from both ends of the political spectrum. On the right, Trump and others warn that Obamacare is “imploding.” (Instead, enrollment is fairly resilient.) On the left, Democrats blame Trump administration “sabotage” for coverage losses. (No hemorrhaging was found.) 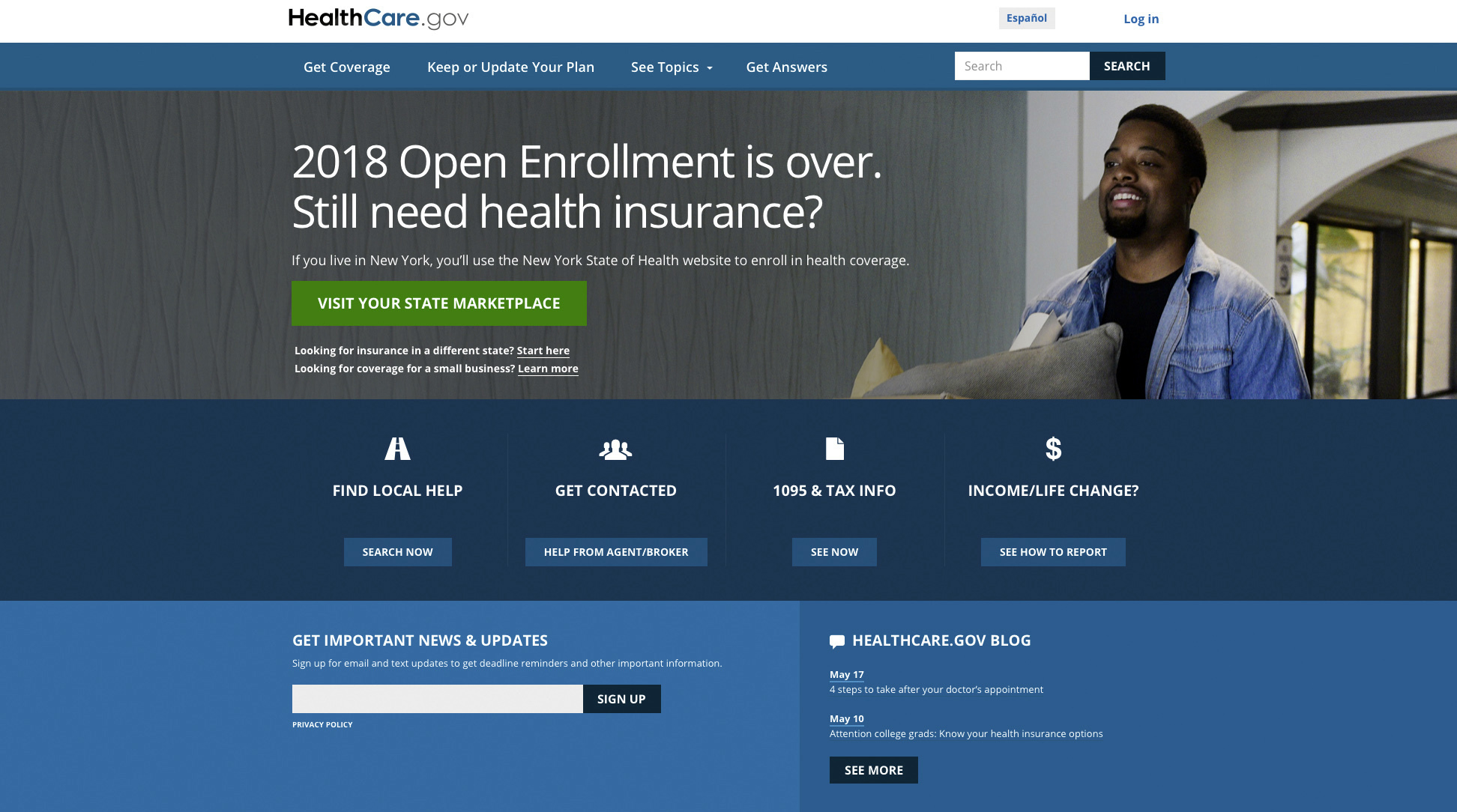 This screen grab shows the main page of the healthcare.gov website in Washington, on Monday, May 21, 2018. A major government survey finds that the U.S. clung to its health insurance gains last year, a surprise after President Donald Trump’s repeated attempts to dismantle “Obamacare.” The survey from the Centers for Disease Control and Prevention is out May 22, and finds that 9.1 percent of Americans were uninsured in 2017, or a little more than 29 million people. (HealthCare.gov via AP)

“It’s a testament to the high value people place on health insurance,” said Katherine Hempstead, a senior health policy adviser at the nonpartisan Robert Wood Johnson Foundation. “People will tenaciously hang on to their health insurance.”

Still, the survey found some worrisome indicators of issues potentially ahead:

—The uninsured rate rose among “not poor” adults. (Translation: middle class.) That increase was statistically significant, rising to 8.2 percent in 2017. Hempstead said it may reflect the impact of sharp premium increases for individual plans for people in the solid middle class, who aren’t eligible for subsidized coverage under the ACA. “They are uniquely required to pay the full retail cost of health care,” she said.

—The uninsured rate also rose significantly in states that have not taken advantage of the ACA’s Medicaid expansion for low-income people. It averaged 19 percent for adults in states that had not expanded Medicaid, a big difference from about 9 percent uninsured in states expanding low-income coverage. The Medicaid expansion survived repeal efforts and several states are moving to join the 32 others, plus Washington, D.C., that have expanded.

Last year was tumultuous for health care, with Trump and Congress finally poised to deliver on the GOP vow to repeal President Barack Obama’s signature law. After repeated tries, the effort collapsed in the Senate. But Republicans did manage to undo the law’s unpopular requirement that most Americans maintain coverage or risk fines. Many experts believe the number of uninsured will increase when repeal of the so-called individual mandate goes into effect in 2019.

Trump also used his executive authority to undermine Obama’s law. He pulled the plug on legally contested subsidies for deductibles and copayments, triggering a spike in premiums. His administration cut the HealthCare.gov sign-up season in half, and slashed the ad budget. Changes pending this year will allow insurers to offer lower-cost plans that have fewer benefits, and can also turn away people in poor health.

Separately, the CDC survey showed no slowing down of the longstanding shift to high-deductible health insurance, with nearly 44 percent of Americans now in plans that require individuals to pay at least $1,300 of medical bills each year, or $2,600 for family coverage.

Two independent private surveys have recently shown an increase the U.S. uninsured rate, but the CDC’s approach is different. The government survey relies on face-to-face interviews, not telephone polling. And it’s based on data from about 78,000 people — a very large pool.

“This report is as credible a data source on the uninsured as we have,” said Wilensky.