There’s never been a better time to be treated for a heart attack. U.S. hospitals have set a record for how quickly they open blocked arteries, averaging under one hour for the first time since these results have been tracked.

More than 93 percent of patients now have their arteries opened within the recommended 90 minutes of arrival.

“Things have definitely improved” from a decade ago, when less than half of heart attack patients were treated that fast, says Dr. Fred Masoudi, a University of Colorado cardiologist who led a recent report examining response times.

It’s based on records from about 85 percent of U.S. hospitals that do the artery procedure, angioplasty . Through a blood vessel in the groin or an arm, doctors guide a tube to the blockage causing the heart attack. They inflate a tiny balloon to flatten the clog, and leave behind a mesh tube called a stent to prop the artery open.

The sooner blood flow is restored, the less chance of permanent damage.

“It’s one of the few things in medicine where time, literally seconds, is of the essence. It’s where the phrase ‘time is muscle’ comes from,” says Dr. Ajay Kirtane, director of the lab that performs angioplasties at New York-Presbyterian/Columbia University Medical Center. 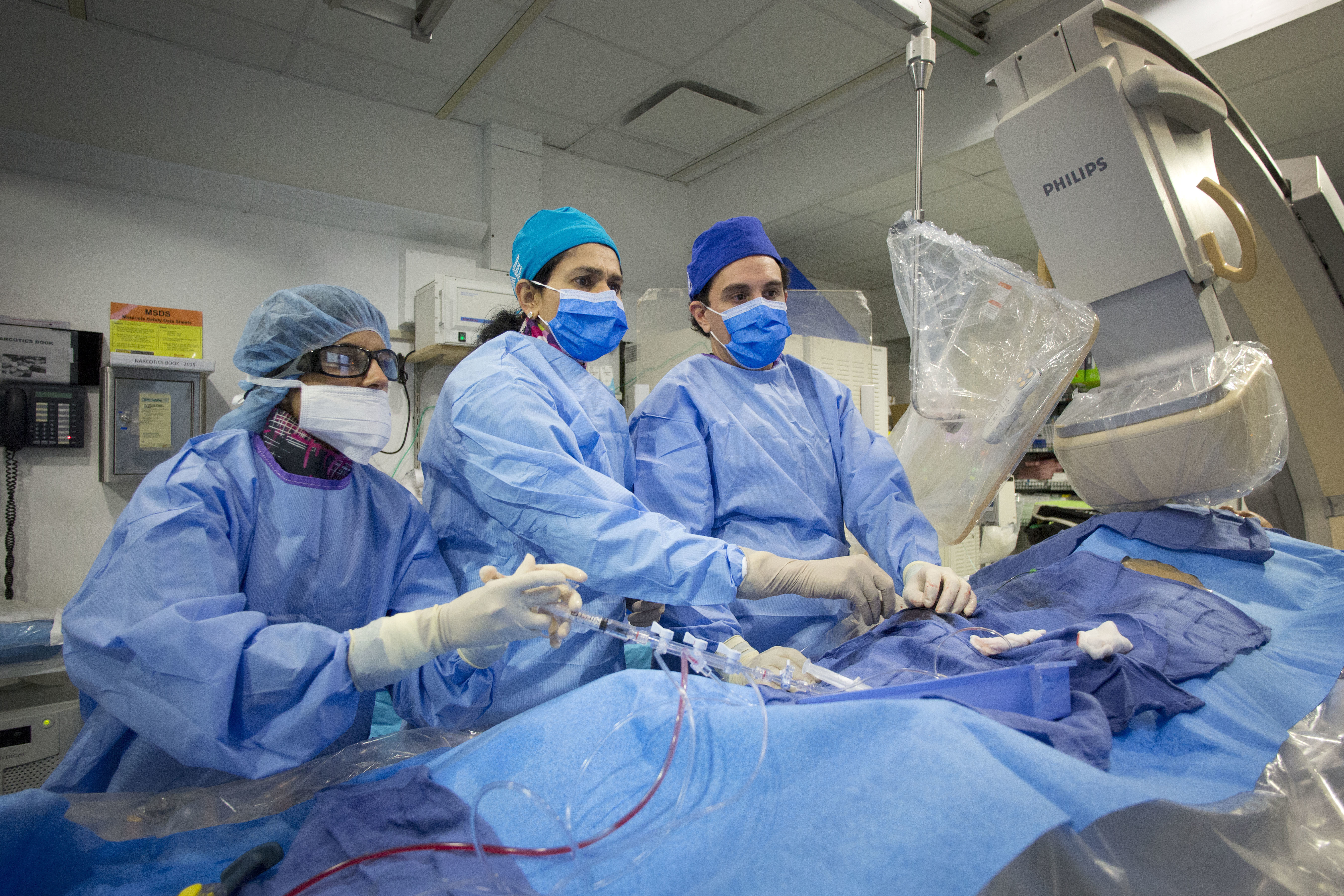 In this Feb. 16, 2017 photo, Dr. Annapoorna Kini, center, performs a non-emergency angioplasty at Mount Sinai Hospital in New York. Through a blood vessel in the groin, she guides a tube to a blockage in the heart. She inflates a tiny balloon to flatten the clog, and leaves behind a mesh tube called a stent to prop the artery open. (AP Photo/Mark Lennihan)

The risk of dying goes up 42 percent if care is delayed even half an hour beyond the 90 minutes that U.S. guidelines say patients should be treated after arrival.

In 2005, this “door-to-balloon” time averaged a dismal 96 minutes, and the American College of Cardiology led a drive to get hospitals to improve. The report shows it plunged to 59 minutes in 2014.

It was only 24 minutes for George Smith at UConn John Dempsey Hospital in Farmington, Connecticut. The 82-year-old woke up on March 31 with intense jaw pain, the same kind he had during a heart attack two years ago. His wife called 911. An ambulance whisked him to the emergency room, and “they were all waiting for me” at the door, he says.

An hour later he was sitting up in bed with a new stent. “I was amazed,” he says. “Such a blessing.”

One reason UConn is so fast — its median door-to-balloon time was 56 minutes last year, and only 39 minutes during one recent quarter — is the work it has done to make its emergency responders part of the cardiac care team, says the hospital’s EMS coordinator, Peter Canning.

“We used our paramedics to extend our hospital into the patient’s home,” where they do an extensive electrocardiogram of the heartbeat and call results ahead to the hospital to get the angioplasty room ready, he says. “Calling from 25 minutes out instead of 5 minutes out can be a savings of 20 minutes of heart muscle.”

But all that speed by the hospital won’t do much good unless patients act fast, too, and call 911 if they think they might be having a heart attack.

—Discomfort in the center of the chest lasting more than a few minutes, or that goes away and comes back. It can feel like pressure, squeezing, fullness or pain.

—Pain or discomfort in one or both arms, the back, neck, jaw or stomach.

—Shortness of breath, which might include breaking out in a cold sweat, or feelings of nausea or lightheadedness.

“For women, the symptoms may not be the same. It may not be the typical chest pain” but rather abdominal pain, nausea or unusual tiredness, says Dr. Annapoorna Kini, a cardiologist at Mount Sinai Hospital in New York City.

What to do? “Get medical help,” she says. “It’s better to worry after” about whether it was really a stomach problem rather than a heart attack.

Angioplasty also is done for non-emergency conditions, to treat chronic chest pain caused by arteries that are clogged but not severely blocked, and its use in that setting is more questionable. Often medicines and other things can be tried first, and angioplasty can be avoided or delayed.

The report shows that fewer people are getting these procedures inappropriately. In 2014, about one third of angioplasties were elective, for non-emergency situations. Just over half were deemed to be done for clearly appropriate reasons and another one third were classified “may be appropriate” under guidelines from the cardiology college and others. About 14 percent were deemed “rarely appropriate” — less than other research has found in the past.