Scientists for the first time have tried editing a gene inside the body in a bold attempt to permanently change a person’s DNA to try to cure a disease.

The experiment was done Monday in California on 44-year-old Brian Madeux. Through an IV, he received billions of copies of a corrective gene and a genetic tool to cut his DNA in a precise spot.

“It’s kind of humbling” to be the first to test this, said Madeux, who has a metabolic disease called Hunter syndrome. “I’m willing to take that risk. Hopefully it will help me and other people.”

Signs of whether it’s working may come in a month; tests will show for sure in three months.

If it’s successful, it could give a major boost to the fledgling field of gene therapy . Scientists have edited people’s genes before, altering cells in the lab that are then returned to patients. There also are gene therapies that don’t involve editing DNA.

But these methods can only be used for a few types of diseases. Some give results that may not last. Some others supply a new gene like a spare part, but can’t control where it inserts in the DNA, possibly causing a new problem like cancer.

This time, the gene tinkering is happening in a precise way inside the body. It’s like sending a mini surgeon along to place the new gene in exactly the right location.

“We cut your DNA, open it up, insert a gene, stitch it back up. Invisible mending,” said Dr. Sandy Macrae, president of Sangamo Therapeutics, the California company testing this for two metabolic diseases and hemophilia. “It becomes part of your DNA and is there for the rest of your life.”

That also means there’s no going back, no way to erase any mistakes the editing might cause. 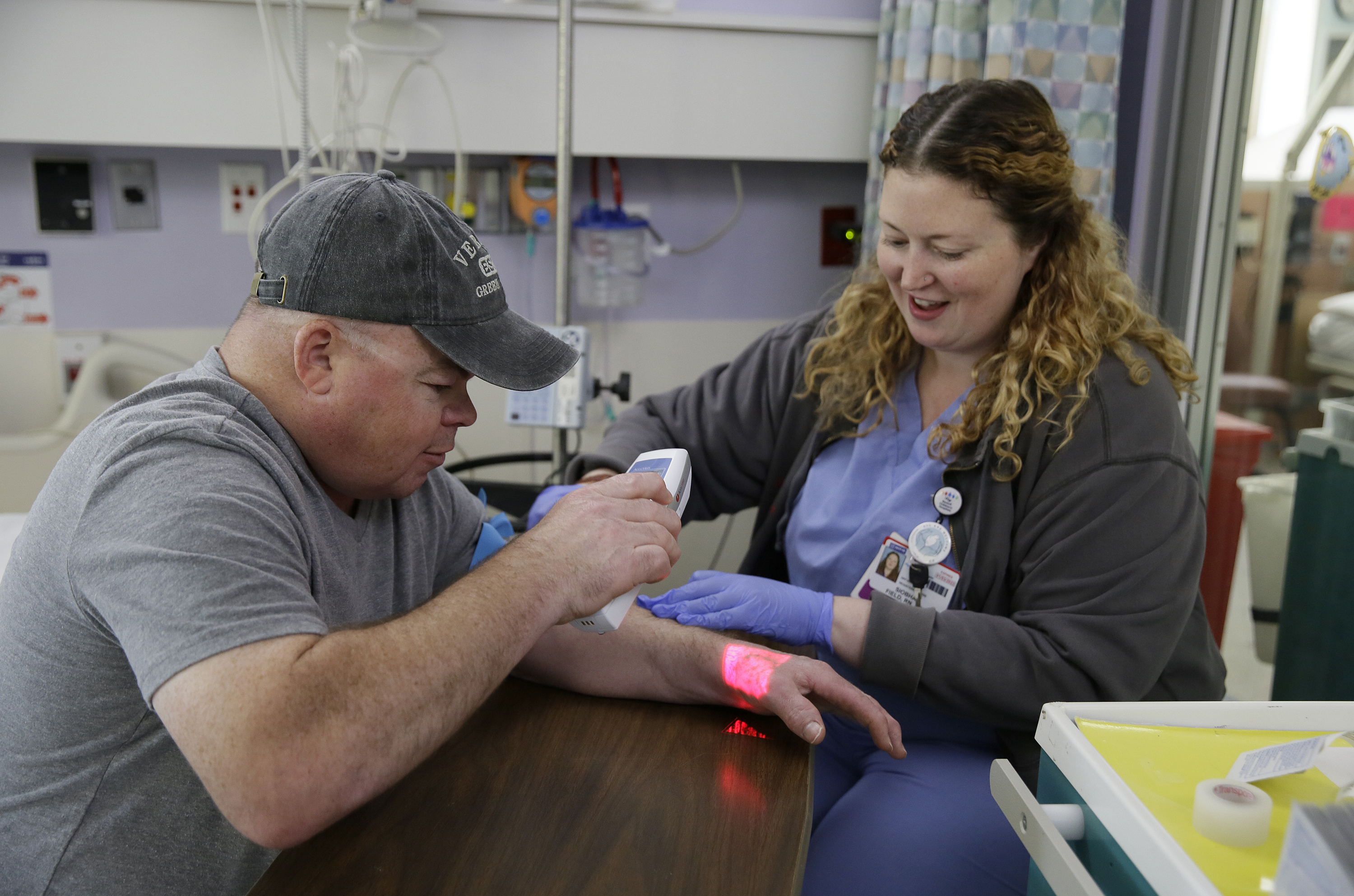 Brian Madeux, 44, uses an infrared device to look at his veins as nurse Siobhan Field prepares an IV line for the first human gene editing therapy for NPS, at the UCSF Benioff Children’s Hospital Oakland in Oakland, Calif., on Monday, Nov. 6, 2017. Madeux, who has a metabolic disease called Hunter syndrome, will receive billions of copies of a corrective gene and a genetic tool, through an IV, to cut his DNA in a precise spot. (AP Photo/Eric Risberg)

“You’re really toying with Mother Nature” and the risks can’t be fully known, but the studies should move forward because these are incurable diseases, said one independent expert, Dr. Eric Topol of the Scripps Translational Science Institute in San Diego.

Protections are in place to help ensure safety, and animal tests were very encouraging, said Dr. Howard Kaufman, a Boston scientist on the National Institutes of Health panel that approved the studies.

He said gene editing’s promise is too great to ignore. “So far there’s been no evidence that this is going to be dangerous,” he said. “Now is not the time to get scared.”

Woe From Head To Toe

Fewer than 10,000 people worldwide have these metabolic diseases, partly because many die very young. Those with Madeux’s condition, Hunter syndrome , lack a gene that makes an enzyme that breaks down certain carbohydrates. These build up in cells and cause havoc throughout the body.

“Many are in wheelchairs … dependent on their parents until they die,” said Dr. Chester Whitley, a University of Minnesota genetics expert who plans to enroll patients in the studies.

Madeux, who now lives near Phoenix, is engaged to a nurse, Marcie Humphrey, who he met 15 years ago in a study that tested this enzyme therapy at UCSF Benioff Children’s Hospital Oakland, where the gene editing experiment took place.

He has had 26 operations for hernias, bunions, bones pinching his spinal column, and ear, eye and gall bladder problems.

“It seems like I had a surgery every other year of my life” and many procedures in between, he said. Last year he nearly died from a bronchitis and pneumonia attack. The disease had warped his airway, and “I was drowning in my secretions, I couldn’t cough it out.”

Madeux has a chef’s degree and was part owner of two restaurants in Utah, cooking for US ski teams and celebrities, but now can’t work in a kitchen or ride horses as he used to.

Gene editing won’t fix damage he’s already suffered, but he hopes it will stop the need for weekly enzyme treatments.

Initial studies will involve up to 30 adults to test safety, but the ultimate goal is to treat children very young, before much damage occurs. 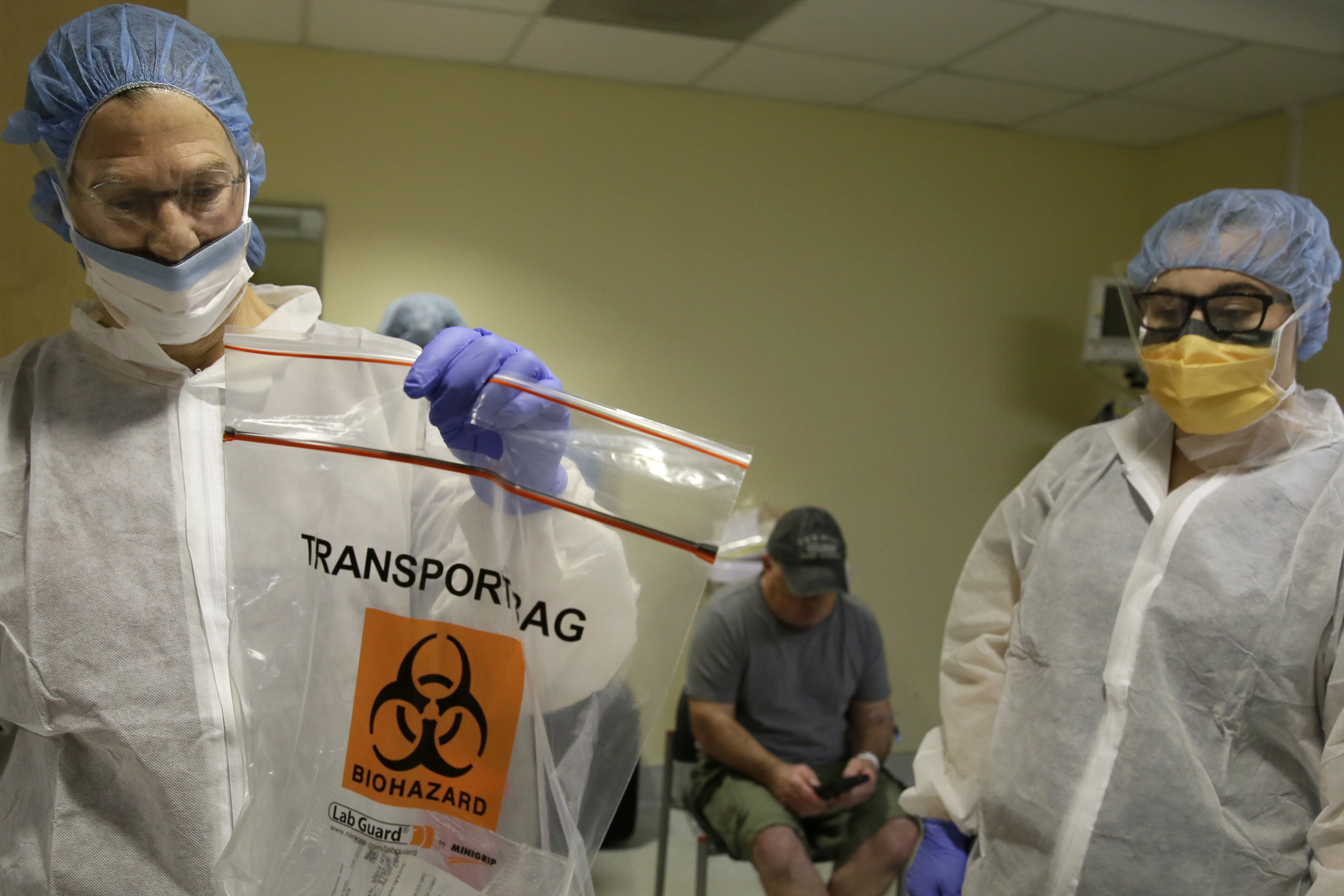 In this photo taken Monday, Nov. 6, 2017, Brian Madeux, 44, sits and waits to receive the first human gene editing therapy for NPS, at the UCSF Benioff Children’s Hospital in Oakland, Calif. Through an IV, Madeux will receive billions of copies of a corrective gene and a genetic tool to cut his DNA in a precise spot. “It’s kind of humbling” to be the first to test this, said Madeux, who has a metabolic disease called Hunter syndrome. (AP Photo/Eric Risberg)

A gene-editing tool called CRISPR has gotten a lot of recent attention, but this study used a different one called zinc finger nucleases. They’re like molecular scissors that seek and cut a specific piece of DNA.

The therapy has three parts: The new gene and two zinc finger proteins. DNA instructions for each part are placed in a virus that’s been altered to not cause infection but to ferry them into cells. Billions of copies of these are given through a vein.

They travel to the liver, where cells use the instructions to make the zinc fingers and prepare the corrective gene. The fingers cut the DNA, allowing the new gene to slip in. The new gene then directs the cell to make the enzyme the patient lacked.

Only 1 percent of liver cells would have to be corrected to successfully treat the disease, said Madeux’s physician and study leader, Dr. Paul Harmatz at the Oakland hospital.

“How bulletproof is the technology? We’re just learning,” but safety tests have been very good, said Dr. Carl June, a University of Pennsylvania scientist who has done other gene therapy work but was not involved in this study.

What Could Go Wrong

Safety issues plagued some earlier gene therapies. One worry is that the virus might provoke an immune system attack. In 1999, 18-year-old Jesse Gelsinger died in a gene therapy study from that problem, but the new studies use a different virus that’s proved much safer in other experiments.

Another worry is that inserting a new gene might have unforeseen effects on other genes. That happened years ago, when researchers used gene therapy to cure some cases of the immune system disorder called “bubble boy” disease. Several patients later developed leukemia because the new gene inserted into a place in the native DNA where it unintentionally activated a cancer gene.

“When you stick a chunk of DNA in randomly, sometimes it works well, sometimes it does nothing and sometimes it causes harm,” said Hank Greely, a Stanford University bioethicist. “The advantage with gene editing is you can put the gene in where you want it.”

Finally, some fear that the virus could get into other places like the heart, or eggs and sperm where it could affect future generations. Doctors say built-in genetic safeguards prevent the therapy from working anywhere but the liver, like a seed that only germinates in certain conditions.

This experiment is not connected to other, more controversial work being debated to try to edit genes in human embryos to prevent diseases before birth — changes that would be passed down from generation to generation. 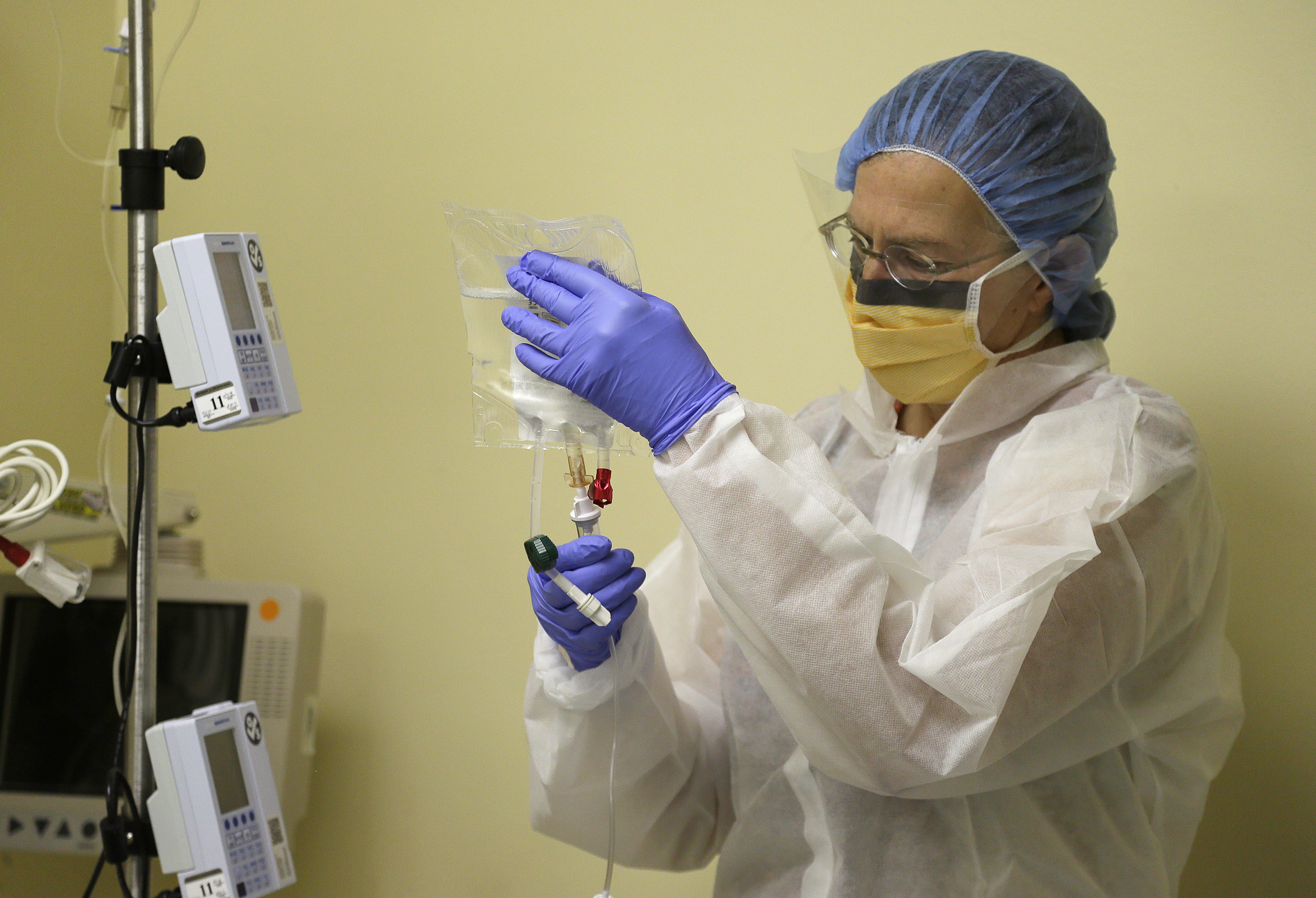 In this photo taken Monday, Nov. 13, 2017, nurse practitioner Jacqueline Madden prepares to start the first human gene editing therapy for NPS, at the UCSF Benioff Children’s Hospital in Oakland, Calif. Brian Madeux, who has a metabolic disease called Hunter syndrome, will receive billions of copies of a corrective gene and a genetic tool, through an IV, to cut his DNA in a precise spot. (AP Photo/Eric Risberg)

Madeux’s treatment was to have happened a week earlier, but a small glitch prevented it.

He and his fiancee returned to Arizona, but nearly didn’t make it back to Oakland in time for the second attempt because their Sunday flight was canceled and no others were available until Monday, after the treatment was to take place.

Scrambling, they finally got a flight to Monterey, California, and a car service took them just over 100 miles north to Oakland.

On Monday he had the three-hour infusion, surrounded by half a dozen doctors, nurses and others wearing head-to-toe protective garb to lower the risk of giving him any germs. His doctor, Harmatz, spent the night at the hospital to help ensure his patient stayed well.

“I’m nervous and excited,” Madeux said as he prepared to leave the hospital. “I’ve been waiting for this my whole life, something that can potentially cure me.”