Computed tomography (CT) scans are one of the most frequently used imaging tools in medicine. In fact, more than 72 million scans are performed each year to diagnose various medical conditions. But public health concerns persist about radiation exposure from these tests—especially when given to children and young adults. Now, researchers at NYU Langone Medical Center report in a new study that they successfully performed CT scans for joint fractures with one-fourteenth the amount of normal CT radiation—without compromising image quality or a surgeon’s ability to effectively diagnose an injury.

Specifically, the researchers reduced the average amount of radiation from 0.43 msV to 0.03 msV, or down to the average dose given in a routine chest X-ray. Equally important, the researchers were able to accurately identify the presence of typical fractures 98 percent of the time.

“We have taken a frequently used and necessary imaging test and made it safer,” says lead study author Sanjit R. Konda, MD, assistant professor of orthopedic surgery at NYU Langone and director of orthopedic trauma at Jamaica Hospital Medical Center. “Providing patients with a CT scan with 14-times less radiation could have significant implications from a public health and safety standpoint.”

The findings were presented Wednesday, March 2, at the 2016 American Academy of Orthopedic Surgeons (AAOS) Annual Meeting. 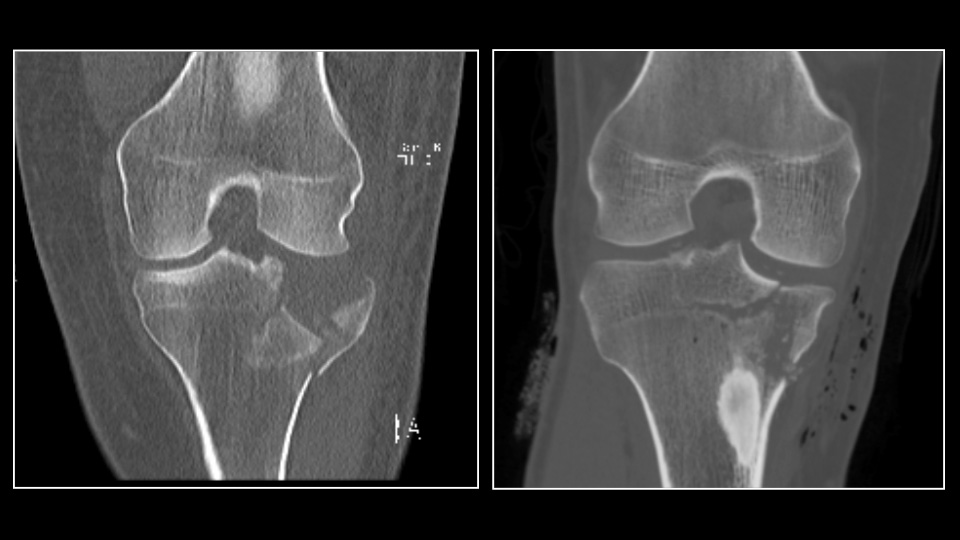 An ultra-low dose CT scan of a fracture of the tibial plateau (left) compared to a conventional dose CT scan.

Radiation in CT Scans: A Public Health Concern
CT scans help diagnose medical conditions including broken bones, cancers, internal bleeding, or signs of heart disease. Yet, despite its prevalent use, medical societies and federal agencies have been increasingly trying to reduce the number of unnecessary scans due to radiation’s link to an increased risk for cancer. While the overall risk is considered low, there is particular concern in performing CT scans on children. Approximately 600,000 head and abdominal CT scans are annually performed in children under 15.

In orthopedic trauma, CT scans help diagnose injuries around a joint, particularly if the fracture involves the joint’s surface. The scans also help clinicians assess joint displacement and aid in surgical planning to put the joint back in position. An X-ray, while a good initial screening tool, does not provide the same level of detail.

Previously, the group applied this protocol to examine air around a knee joint where infections easily could develop. Its application was so successful that the researchers set out to use the protocol to reduce radiation for traumatic joint fractures, such as those caused by a car accident or fall.

Between August 2014 and March 2015, 50 patients showing clinical symptoms of joint fractures received ultra-low dose radiation CT scans. Images from these ultra-low dose CT scans were compared to a sample of age-matched, similar fracture injuries where patients were evaluated with a standard CT scan.

The results were impressive: researchers achieved 98 percent sensitivity and 89 percent specificity with the ultra-low dose CT scans. In other words, if a person has a joint fracture, it would be detected on the ultra-low dose CT scan 98 percent of the time, while a negative finding—no fracture having occurred—was determined 89 percent of the time. Equally important, these findings were comparable to the conventional CT-scans (98 percent sensitivity and 85 percent specificity with occult fractures removed). Image quality was rated moderate to near perfect by the orthopedic surgeons.

“The ability to perform ultra-low dose radiation CT scans without compromising image quality demonstrates the comprehensive capabilities of this protocol,” says senior study author Kenneth A. Egol, MD, professor of orthopedic surgery and chief of the Trauma and Fracture Division of the Department of Orthopaedic Surgery at NYU Langone. “Patients who undergo a traumatic injury or suspected fracture have enough to worry about. Our research makes radiation exposure among the least of their concerns.”

Next, the researchers will continue to follow-up patients who underwent the ultra-low dose CT scans to ensure patient outcomes haven’t changed in the hopes of expanding the protocol to other departments.