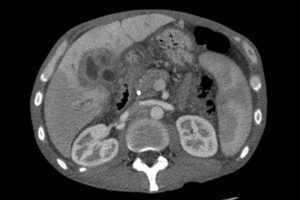 CT scan of a liver with cholangiocarcinoma [Image from Wikipedia]

Researchers at the University of Texas Southwestern have recently discovered that combining ultrasound images with blood tests that test for high alpha fetoprotein (AFP) levels can improve detection of early-stage liver cancer by 40%.

There are about 42,220 new liver cancer diagnoses and about 30,200 will die from it per year. It affects more men than women and its prevalence has more than tripled since 1980. The American Cancer Society reports that it is harder to detect liver cancer in its early stages because the liver is surrounded by the rib cage. By the time the tumor is able to be felt, it might be too big.

“If the cancer is found early, then we can perform curative therapies, allowing patients to live many years,” hepatologist Dr. G. Amit Singal, associate professor of internal medicine and clinical science at UT Southwestern Harold C. Simmons Comprehensive Cancer Center, said in a press release. “Unfortunately, most liver cancer in the United States is discovered at later stages, when curative treatment is not possible and survival is much worse.”

The study is a meta-analysis of 32 previous studies and focuses on using normal ultrasound imaging that is used to check the liver for cancer in addition to using blood tests that scan for AFP to detect liver cancer in its early stages.

“Liver cancer screening in patients with chronic liver disease has traditionally been performed using an abdominal ultrasound. While ultrasound is readily available and noninvasive, it misses many cancers when they are small,” Amit Singal, a professor in clinical cancer research, said. “Our study found that adding the blood biomarker alpha fetoprotein increased detection of early-stage hepatocellular carcinoma from 45 percent with ultrasound alone to 63 percent using the two tests in combination.”

AFP is a plasma protein that liver cells abundantly produce in the fetus. However, those levels are typically low in adults, so a rise in AFP levels could indicate liver cancer.

The research is published in the journal Gastroenterology and was supported by the National Cancer Institute and the Cancer Prevention Research Institute of Texas.