A handful of Alzheimer’s patients signed up for a bold experiment: They let scientists beam sound waves into the brain to temporarily jiggle an opening in its protective shield.

The so-called blood-brain barrier prevents germs and other damaging substances from leaching in through the bloodstream — but it can block drugs for Alzheimer’s, brain tumors and other neurologic diseases, too.

Canadian researchers on Wednesday reported early hints that technology called focused ultrasound can safely poke holes in that barrier — holes that quickly sealed back up — a step toward one day using the non-invasive device to push brain treatments through. 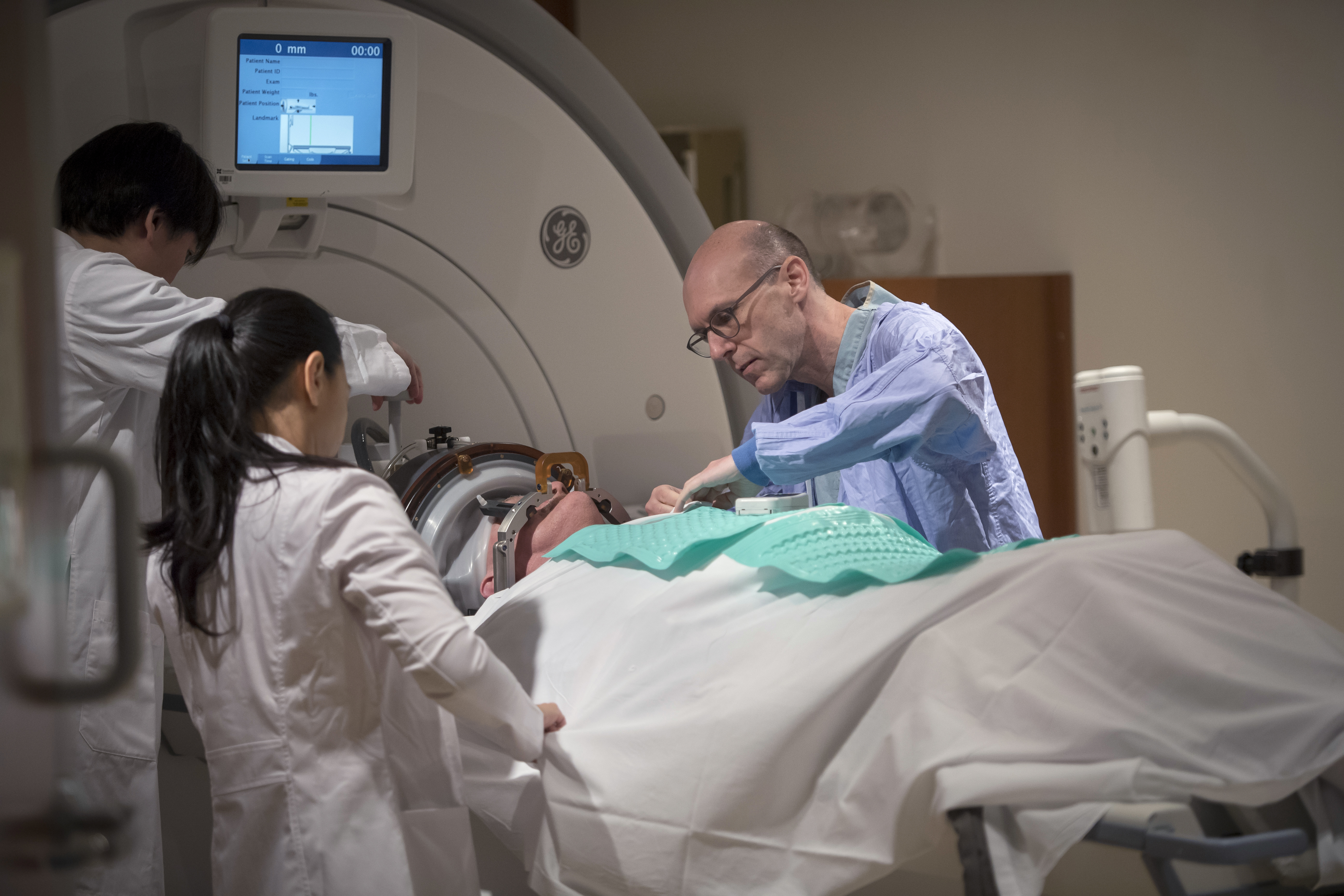 In this March 23, 2017 photo provided by the Sunnybrook Health Sciences Centre, patient Rick Karr is prepared for treatment at the facility in Toronto, Canada. Karr was the first Alzheimer’s patient treated with focused ultrasound to open the blood-brain barrier. Scientists are using ultrasound waves to temporarily jiggle an opening in the brain’s protective shield, in hopes the technique one day might help drugs for Alzheimer’s, brain tumors and other diseases better reach their target. (Kevin Van Paassen/Sunnybrook Health Sciences Centre via AP)

“It’s been a major goal of neuroscience for decades, this idea of a safe and reversible and precise way of breaching the blood-brain barrier,” said Dr. Nir Lipsman, a neurosurgeon at Toronto’s Sunnybrook Health Sciences Centre who led the study. “It’s exciting.”

The findings were presented at the Alzheimer’s Association International Conference in Chicago and published in Nature Communications.

This first-step research, conducted in just six people with mild to moderate Alzheimer’s, checked if patients’ fragile blood vessels could withstand the breach without bleeding or other side effects — it didn’t test potential therapies.

More safety testing is needed but “it’s definitely promising,” said Dr. Eliezer Masliah of the National Institute on Aging, who wasn’t involved with the study. “What is remarkable is that they could do it in a very focused way, they can target a very specific brain region.”

Alzheimer’s isn’t the only target. A similar safety study is underway in Lou Gehrig’s disease. And researchers are testing if the tool helps more chemotherapy reach the right spot in people with a deadly brain tumor called glioblastoma.

Scientists have long tried different strategies to overcome the blood-brain barrier with little success. The brain’s blood vessels are lined with cells that form tight junctions, almost like a zipper. The barrier lets in select small molecules. Often, treatments for brain diseases are too big to easily pass.

The new approach: Scientists inject microscopic bubbles into the bloodstream. Through an MRI scanner, they aim at a precise brain area. Then they beam ultrasound waves through a helmet-like device to that spot. The pulses of energy make the microbubbles vibrate, loosening those zipper-like junctions in hopes that medications could slip inside.

Within minutes, Lipsman’s team saw a medical dye appear on the Alzheimer’s patients’ brain scans — proof the barrier opened. A repeat scan the next day showed it was closed again. Patients repeated the procedure a month later. 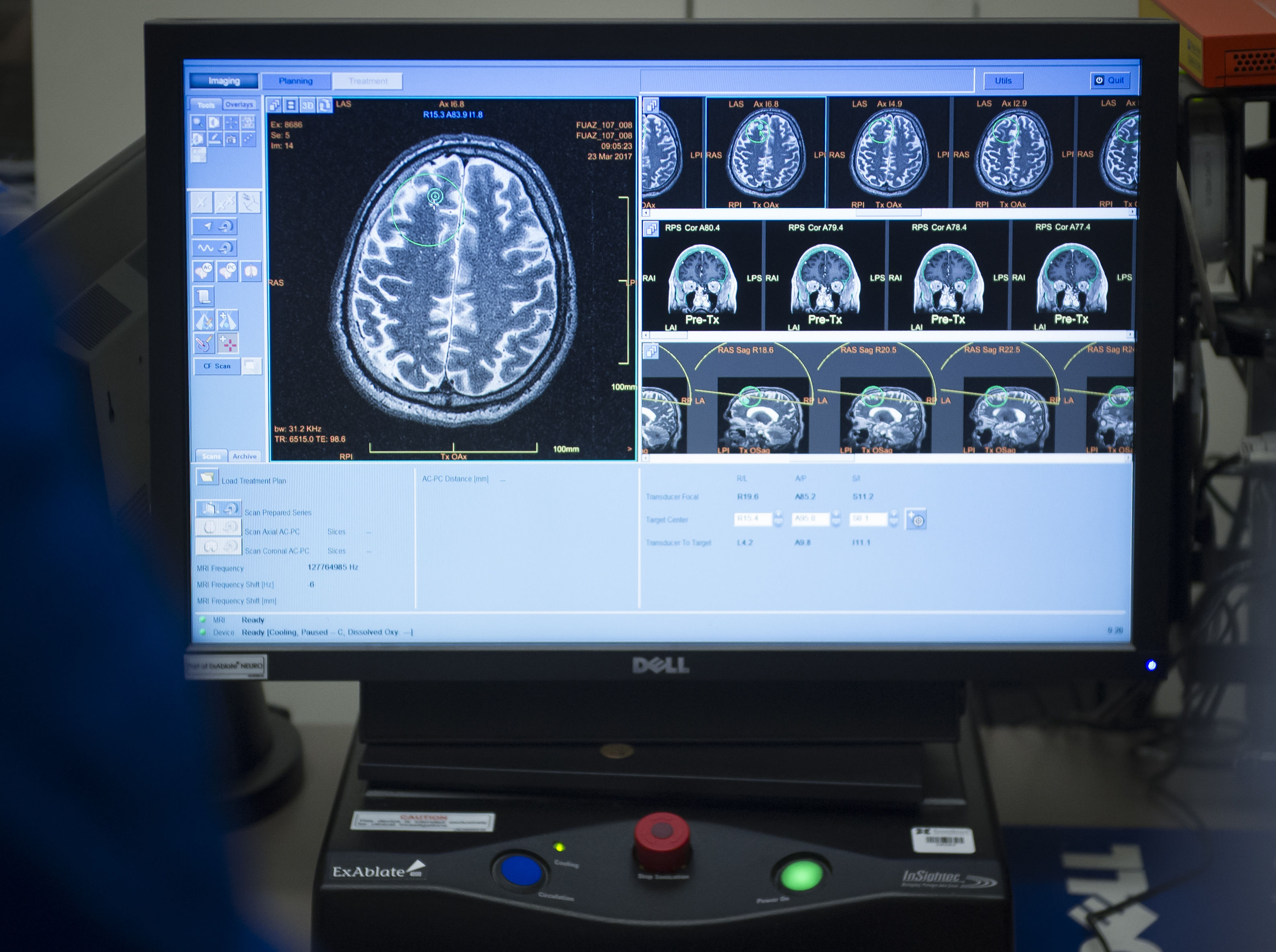 This March 23, 2017 photo provided by the Sunnybrook Health Sciences Centre shows brain scans of patient Rick Karr as staff members treat him at the facility in Toronto, Canada. Karr was the first Alzheimer’s patient treated with focused ultrasound to open the blood-brain barrier. Scientists are using ultrasound waves to temporarily jiggle an opening in the brain’s protective shield, in hopes the technique one day might help drugs for Alzheimer’s, brain tumors and other diseases better reach their target. (Kevin Van Paassen/Sunnybrook Health Sciences Centre via AP)

Researchers reported no serious side effects, and no worsening of cognitive function. The study was funded by the non-profit Focused Ultrasound Foundation.

“It’s not painful or anything,” said Rick Karr of Everett, Ontario, the study’s first participant.

A retired truck driver and amateur musician, Karr was diagnosed with Alzheimer’s in 2011. Doctors made clear the study wouldn’t treat his memory problems, but “I feel privileged,” Karr said in an interview. “I could help somebody else down the road.”

A French company, CarThera, is testing a different ultrasound technique for brain tumors, using an implant attached to the skull during surgery.

For the non-invasive ultrasound, device maker InSightec has Food and Drug Administration permission to begin the Maryland tumor trial and a small U.S. Alzheimer’s study.

This time, scientists will aim deeper into Alzheimer’s-affected brains to a key memory region, said lead researcher Dr. Ali Rezai of West Virginia University’s Rockefeller Neuroscience Institute. And they’ll measure if simply opening the barrier could help the body clear away sticky plaques that are a hallmark of Alzheimer’s, after mouse studies suggested that’s a possibility.

But by far the bigger interest is in using ultrasound to deliver drugs — if the next-step studies conclude it’s safe to try.