Elevated cranial pressure, the result of head traumas and brain tumors, is a potentially deadly complication. But although time is of the essence in detecting irregular cranial pressures, conventional diagnosis relies on time-consuming, invasive surgery at increased risk for patients. A new generation of innovative scanning devices invented by Kaunas University of Technology (Lithuania) researcher Arminas Ragauskas (69) solves the problem: based on the sonic Doppler wavelength effect, the ultrasound scanners provide precise and instant pressure measurements via a probe applied to the patient’s eye. Besides elevated cranial pressures, the devices also detect stroke, glaucoma, and brain tumors.

For this achievement, the European Patent Office (EPO) has named Arminas Ragauskas as one of three finalists for the European Inventor Award 2016 in the category “Small and medium-sized enterprises (SMEs)”. The winners of the 11th edition of the EPO’s annual innovation prize will be announced at a ceremony in Lisbon on 9 June. This is the first time a Lithuanian researcher has been nominated for the award.

While the winners of the Award will be decided by an international jury, one of the 15 finalists will have the chance to take home the Popular Prize, which will be decided in an online poll voted for by the general public. This is a real chance for the Lithuanian public to get behind Professor Ragauskas. Voting is possible on the EPO website and Facebook page and is open from 26 April until 31 May. All voters will be entered into a draw, giving them the chance to win a prize. One vote is possible every 24 hours until the closing date.

Providing Certainty for Life-Saving Decisions
“The scanning devices invented by Arminas Ragauskas provide quick and accurate measurements of cranial pressure levels, allowing doctors to initiate life-saving treatments on time, which was previously impossible”, said EPO President Benoît Battistelli announcing the European Inventor Award 2016 finalists. “By utilizing the Doppler wavelength effect in an innovative way, the scanners are a prime example of a fundamental physical phenomenon at the heart of a technically advanced, patented invention.”

Thanks to the invention by Ragauskas and colleagues Gediminas Daubaris and Algis Dziugys from the Health Telematics Science Institute at Kaunas University of Technology, physicians and emergency room staff can now make informed decisions on the necessary course of treatment in a timely fashion – with potentially life-saving consequences.

Based on a quick and simple reading obtained from a sensor placed on the patient’s eye, the team’s devices compute the pressure differential between the inside and outside the skull. 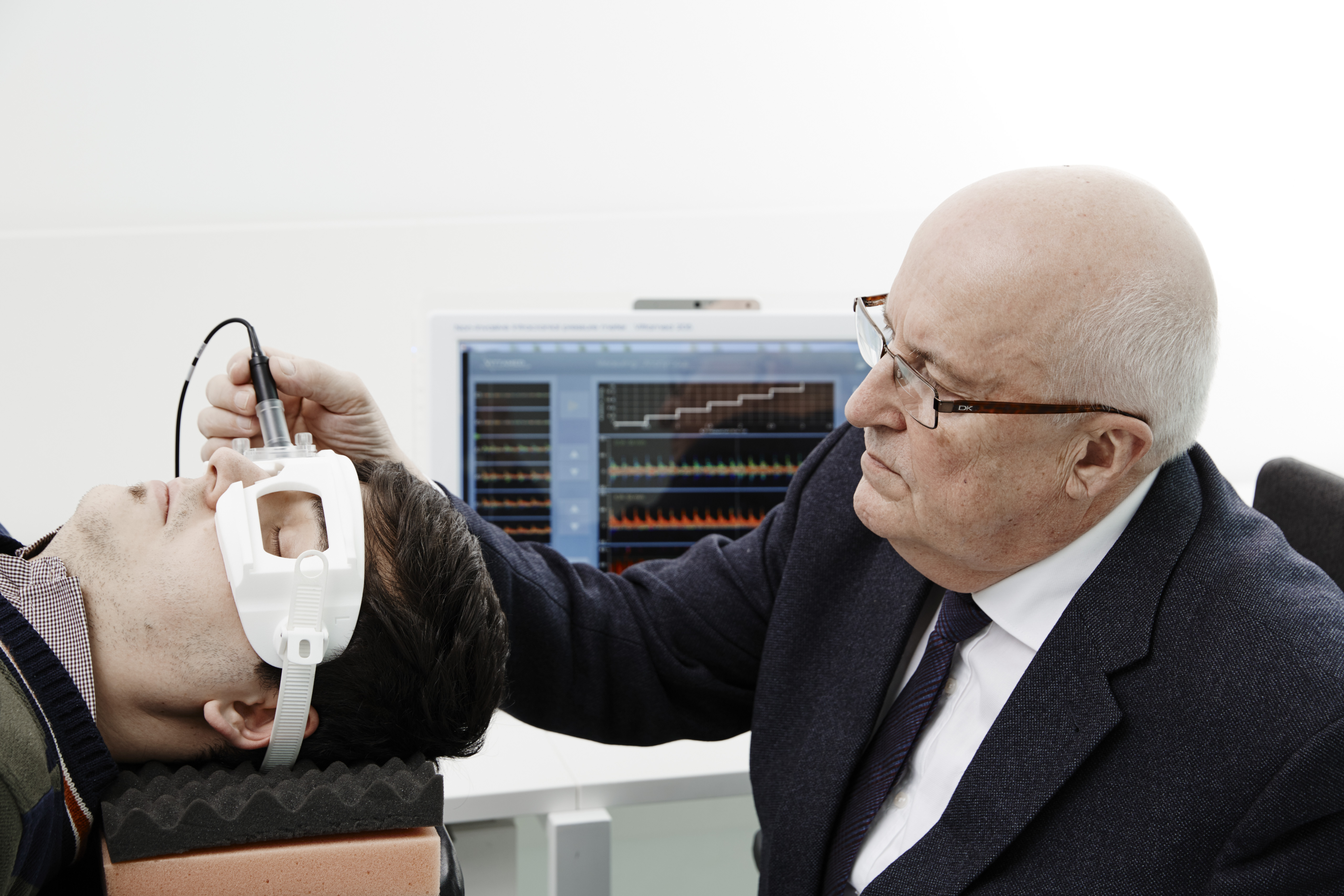 Arminas Ragauskas (Lithuania), nominated for the European Inventor Award 2016 in the SMEs category

Ultrasound Scanners at Work
At first sight, the state of the art in diagnosing elevated cranial pressures appears as a throwback to mediaeval times. As part of an invasive surgery, patients needed to be anesthetized before doctors would drill a small-sized hole into the skull for a reading of intracranial pressures. Needless to say, the procedure itself poses potential for further complications. Drawing on the Doppler wavelength effect, Ragauskas and his team implemented ultrasound technology for a far more benign and gentle process.

“Our lab had already patented devices for various industrial applications”, says Ragauskas. “Because of our extremely sensitive ultrasonic devices, it was possible to think about medical applications.”

Similar to the principle of the inflated armband used to measure blood pressure, the ultrasound scanners measure brain pressure by applying a small amount of pressure to the eye to match the pressure of the artery just behind the eye, called the central retinal artery, which leads directly to the brain.

The technology then arrives at the measurement by comparing the applied external pressure to the autonomous intracranial pressure. For perspective, intracranial pressure (ICP) is usually in the range of 0 to 10 mmHg in healthy adults – roughly 10% of the pressure created by the human heart to circulate blood – while pressure greater than 20mmHg is considered abnormal. Precise and accurate measurements as achieved by Ragauskas’ scanners are important, because relatively small increments in pressure can have devastating effects on pressure-sensitive brain tissue: Levels above 40mmHg are almost always associated with neurological dysfunction (impairment of consciousness, problems breathing) while pressures above 60mmHg tend to be fatal. 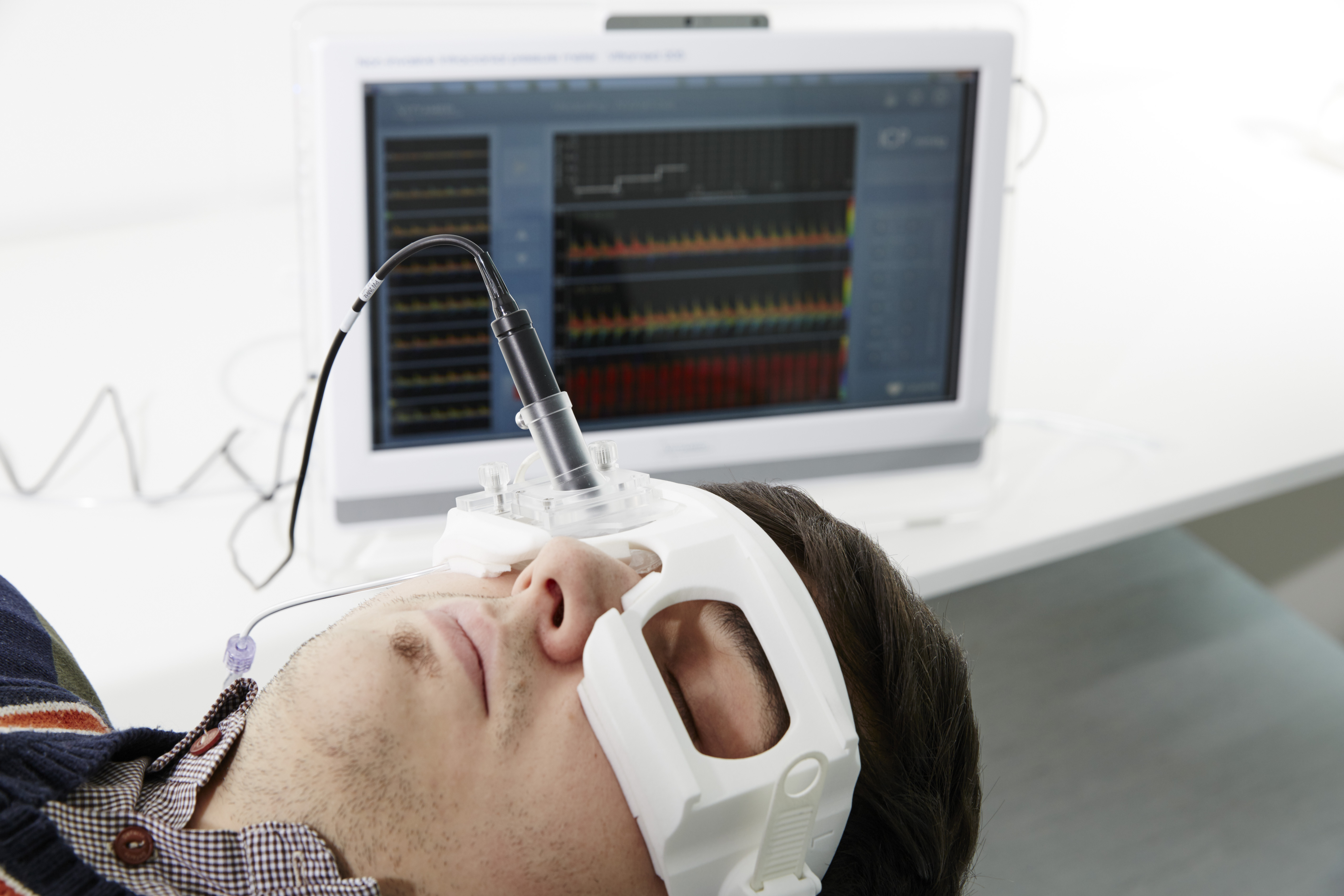 Based on a quick and simple reading obtained from a sensor placed on the patient’s eye, the team’s devices compute the pressure differential between the inside and outside the skull.

Turning a New Page in Emergency Response
Traumatic brain injury and central nervous system tumors rank among the leading causes of death worldwide. In Europe, approximately 2.5 million people suffer a TBI each year, leading to 75 000 fatalities. As timely diagnosis is the key to optimal treatment outcomes, the devices mark a landmark improvement over invasive surgery, which requires that patients are anesthetized. The devices can also be used directly without time-consuming calibration for individual patients, a key advantage over other diagnostic tools used in neurology. Thereby, the new generation of scanners, cleared for clinical use since 2014 with the CE mark of approval, afford neurosurgeons, neurologists and ophthalmologists a fast, accurate and above all safe way to help diagnose a wide range of neurological conditions and glaucoma.

Measuring the Human Body with Precision
Arminas Ragauskas earned a degree in Electronic Engineering in 1964 at Kaunas University of Technology, Lithuania, followed by a doctorate in Measurement Sciences in 1969. In 1993, Ragauskas established the Telematics Science Laboratory at Kaunas University of Technology to pursue his interest in measuring technologies for the human body in areas including neurology. The author of 91 peer-reviewed scientific papers and more than 91 granted or pending patents, Ragauskas still heads the Health Telematics Science Institute as its director. 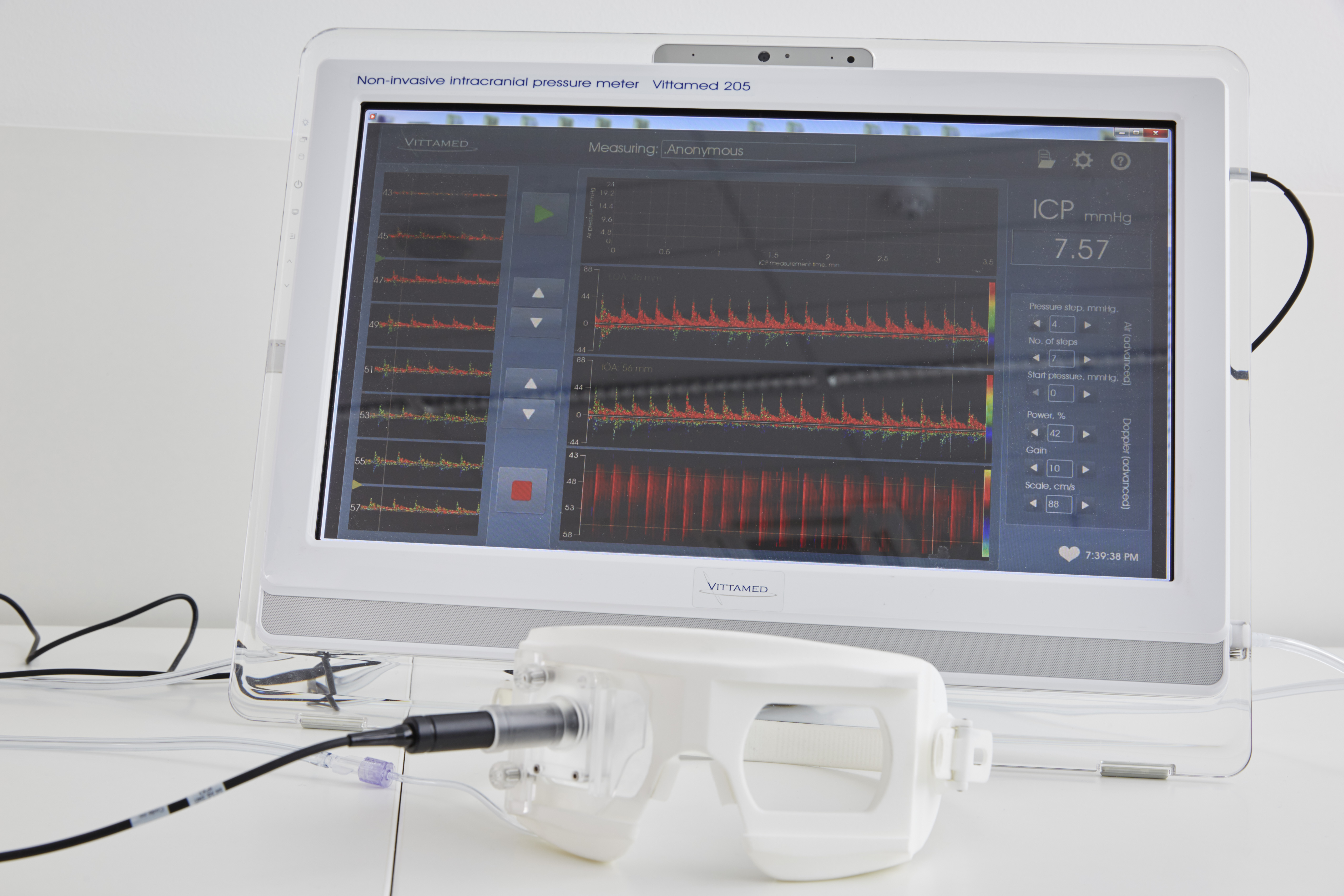 Similar to the principle of the inflated armband used to measure blood pressure, the ultrasound scanners measure brain pressure by applying a small amount of pressure to the eye to match the pressure of the artery just behind the eye, called the central retinal artery, which leads directly to the brain.

In 2013, Arminas Ragauskas co-founded spin-off company Vittamed to market the patented technologies and currently serves as chief science & technology officer. Marketed as the non-invasive intracranial pressure meter Vittamed 205 and non-invasive cerebral auto-regulation monitor Vittamed 505, the devices received the CE Mark seal of approval in 2015. Vittamed is currently pursuing product launches in Europe, Australia, and other countries together with a 510(k) submission to the US Food and Drug Administration as the basis of commercialization in the United States. As an interesting side note, the devices are also used by the U.S. National Space Biomedical Research Institute to investigate the effects of simulated spaceflight conditions on brain physiology. Third-party analysts estimate the global brain monitoring market – including diagnostic devices for TBI, stroke, and tumors at a value of EUR 6.6 billion in 2015, expected to grow to EUR 10.1 billion by 2020.