What kind of experiments would you conduct if you had your own personal genetic engineering lab? Perhaps you might engineer superfoods to tackle world hunger? Mess around with stem cells? Find a cure for cancer? Make cancer-curing superfoods out of stem cells?

Alright, maybe not that last one; apologies, I get carried away pretty easily.

But it’s hard not to imagine the endless possibilities an up-and-coming mad scientist might dream up if genetic engineering technology were simple enough to keep lying around the house. It’s not that far off from reality as you might think, either. Amino Labs, founded by designer Julie Legault, based on her thesis for the MIT Media Lab, just completed a successful round of funding on Indiegogo for a portable biolab, small enough to sit comfortably on a desktop.

Appropriately named after amino acids (i.e., the building blocks of proteins, and of life) Amino lets anyone flex their budding mad scientist muscles by enabling growth of living cells to invent anything they might dream of, including flavors, fragrances, materials, and—most importantly—medicine.

Cells can be continuously grown while multiple data sources are collected. The “Amino Apps” keep these cells alive with a combination of living cells, a DNA program, and a growth liquid of food and chemicals. The first product is called the Amino One, which provides two options: the Amino Glow, which glows like a nightlight, or the Amino Explorer, which lets users test out a variety of DNA programs. It also comes with an automatic cleaning system to keep apps growing longer. 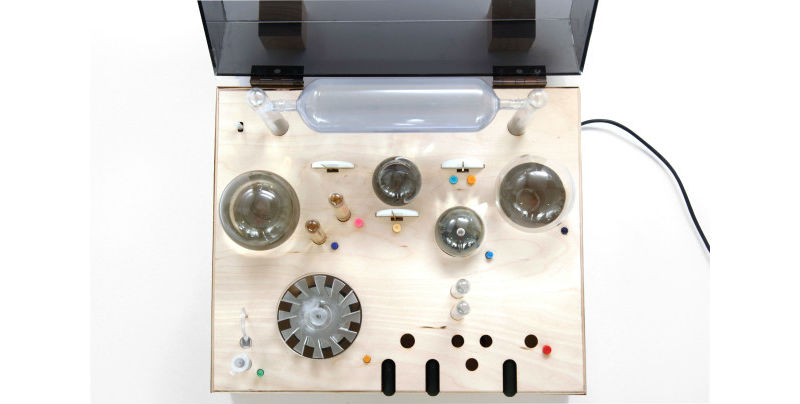 The steps for using amino are relatively simple. First, a DNA program is put into living cells. Amino lets you then keep track of how the cell culture is growing. Finally, you can customize your cells by varying food, chemicals, and temperature. Amino One claims to use a “friendly” bacteria strain (though it doesn’t mention which one) that can be used by anyone, anywhere in North America. For ease-of-use, it also comes with real-time instructions and status indicator lights, as well as online videos and walkthroughs.

All of the components of the Amino App (Credit: Amino Labs)

Getting into the nitty-gritty of the biolab, Amino contains an array of sensors to keep track of the cell culture’s environment. Among them are a pH sensor, an optical density sensor, and two temperature sensors. Amino takes all the components of a lab and shrinks them to desktop size; water baths and heading blocks are replaced with incubation plates with temperature controls, shaker incubation is replaced with continuous liquid growth, the spectrophotometer becomes real-time analysis in a browser, and autoclave is replaced with contained chemical inactivation.

Thus far, Amino Labs’ testing has resulted in successfully grown micro-organisms and functionally validated sensors. Of course, selling a bioengineering lab comes with a major concern—once these enter the homes, there’s no feasible way to regulate what people are growing. (Let’s be real; curing cancer won’t be everyone’s goal.) According to Amino Labs, they have aligned themselves with President Obama, the National Security Council, and The National Strategy for Countering Biological Threats. They seem to recognize the beneficial nature of open-source life science research, asserting that widespread individual initiatives will foster innovation.

That said, if you’re interested in DIY genetic engineering, make sure to check up on local laws and regulations. In some areas, certification is necessary to learn genetic engineering. If not, experiment away! Shoot me an e-mail if you end up using Amino to cure cancer.